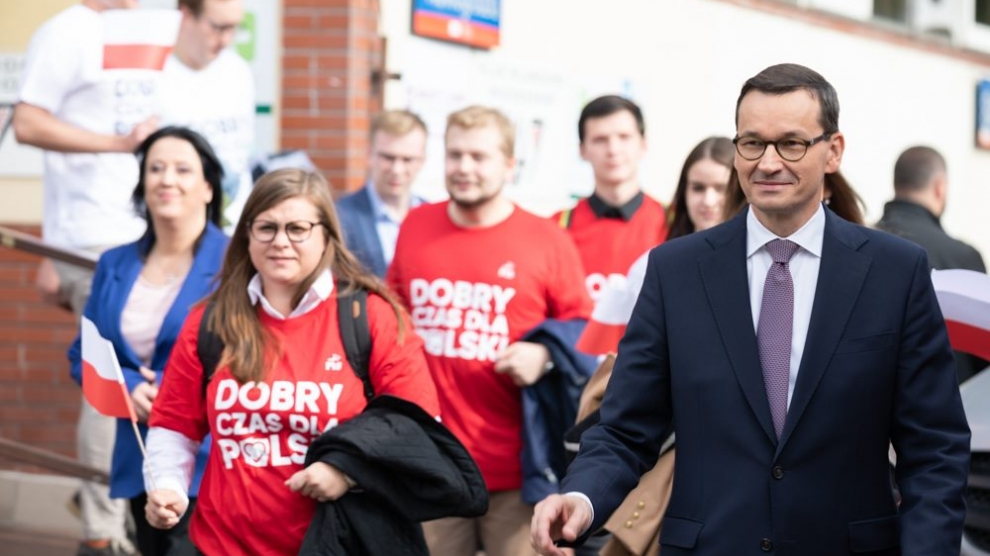 Poland’s ruling Law and Justice party (PiS) looks set for a comfortable victory in the country’s parliamentary election, which takes place on October 13. Final opinion polls see the party winning around 47 per cent of the vote, 18 per cent more than the main opposition grouping, Civic Coalition.

“I do not expect any surprises, and given the state of the opposition I would even lean towards PiS winning an overall majority,” said Paulina Lenik of UCL’s School of Slavonic and East European Studies.

In power since 2015, PiS has sustained considerable support through a generous package of social benefits, which includes the so-called 500+ programme that offers parents tax-free payments of 500 zloty (around 116 euros) per month.

Originally paid only to parents of two or more children, the programme was extended in July to also include families with just one child. As a result of the programme’s extension, Poland now spends 2.7 per cent of its GDP on state benefits for families and children, one of the highest figures in the European Union.

Economists were initially sceptical about the programme’s affordability, but so far the government has been able to fund the scheme, thanks to a booming economy and a clampdown on VAT fraud.

Poland has not had a recession since 1992, a streak bettered only by Australia, and based on purchasing power parity, Poles are now richer than Greeks and are closing in fast on the Portuguese. Growth in gross domestic product – which topped five per cent in 2018 – is set to slow in coming years, but remains amongst the highest levels in the developed world.

PiS has promised a number of further voter-friendly measures should it be re-elected, including a higher minimum wage, free health checks for the over-40s, lower taxes for business and higher subsidies for farmers. It has also shored up its core support with an often vicious culture war, primarily against LGBT+ rights, backed by the country’s powerful Catholic Church.

Much as it presented the then ruling Civic Platform as being “soft” on migration and a threat to Polish traditions and civilisation in the 2015 campaign (ironically, according to the OECD, Poland took in 1.12 million temporary migrants in 2017), this time it is gay rights which have been the focus of its attacks.

The party’s de facto leader Jarosław Kaczyński recently told a party convention that the Civic Coalition would approve same-sex civil partnerships, something that would, he claimed, be followed by same-sex marriage and adoption.

“They will destroy our culture, the basis of our life, our existence and our survival,” said Mr Kaczyński.

Not even a string of scandals, including – most recently – the resignation of the deputy justice minister Łukasz Piebiak over allegations that he had sought to discredit judges critical of the government’s judicial reforms – has dented support for PiS.

Likewise, eternal conflict with the European Union – in 2017, the European Parliament invoked Article 7 of its governing treaty against Poland for persistently flouting democratic rules, the first time it had used the procedure (it would do so again against Hungary in 2018) – has not made much of an impact with PiS voters.

Ms Lenik believes that the weakness of the opposition has been a key factor.

“The opposition has neither a unified voice nor a coherent campaign programme,” she told Emerging Europe. “In the eyes of voters it offers very little when compared to the generous promises made by PiS.”

The opposition has also been affected by its attitude to the swing voters it needs to win over in order to retake power.

“Rather than seeing them as compatriots who might be persuaded to embrace a different vision of politics, they talk about supporters of the government as incorrigible deplorables,” wrote Yascha Mounk in The Atlantic. “Anybody who votes for Law and Justice, a succession of local opposition figures told me with varying degrees of explicitness, is a religious fanatic, an uneducated rube, or a deluded idiot.”

PiS was given a further boost just a week before the election when US President Donald Trump announced that he had nominated Poland for entry into its visa waiver programme, making it easier for Poles to visit the US. Poland has long campaigned to be included in the programme and is currently one of just four European Union countries whose citizens require visas to travel to the US. The others are Bulgaria, Croatia and Romania.

With a clear PiS victory almost certain, the only remaining unknown factor ahead of the vote is who will be the country’s next prime minister. Business figures are hoping that the incumbent, Mariusz Morawiecki, viewed as a moderate without deep roots in PiS, will remain in office. Paulina Lenik believes he will.

“PiS has not indicated a potential change of PM,” she said. “Morawiecki will stay in his chair. Kaczynski’s strategy of leading from ‘behind’ has proven fruitful enough so far, and there is no political rationale for him to take a more formal leading role.”