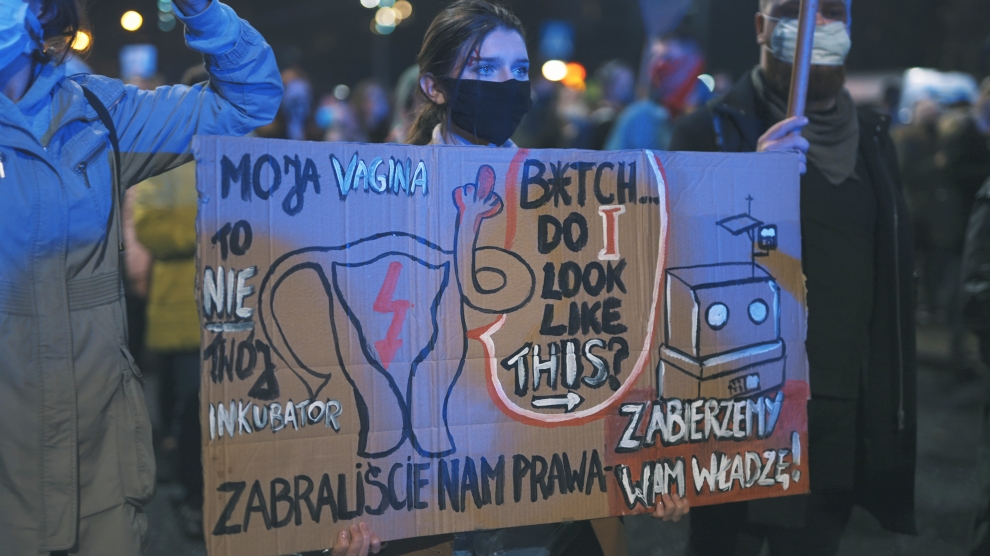 Poland’s ruling Law and Justice party (PiS) is broadly immune to criticism. Whether its critics come from within Poland itself or externally from the European Union, they are promptly dismissed as meddling liberals with an anti-Polish agenda. PiS wraps itself in the Polish flag, appeals to its core support amongst the elderly, those in rural communities and in Poland’s powerful Catholic church, and moves on. PiS, after all, is a highly effective electoral machine that has won Poland’s past two parliamentary and presidential elections.

Yet for a party that since its creation in 2001 has prided itself on being a bastion of anti-communism, a bulwark against what it views as creeping neo-Marxism throughout the Western world, there is one criticism that sticks: comparison with communists. It hurts.

For the past week PiS has nevertheless been subject to exactly this kind of criticism following a ruling from the country’s highest court that declared abortion on the grounds of fetal defect as unconstitutional.

Fetal defects are the reason behind 98 per cent of legal terminations in the country.

Under the ruling, Polish women will now only be permitted to access abortion services if a pregnancy is the result of rape or incest, or if it threatens the health of the woman. Given that these circumstances amount to only two per cent of legal abortions carried out in the country, the court ruling amounts to a virtual ban on the procedure.

This has led to comparisons with communist Romania, where abortion was outlawed from 1967 to 1989, resulting in tens of thousands of unwanted children, many of whom ended up in the country’s now infamous state-run orphanages. Even in communist Romania, however, abortions were permitted in the case of fetal defects.

PiS had been pushing for stricter abortion laws ever since it returned to office in 2015, despite the country’s abortion regulations already being among the most restrictive in Europe. In 2016, it backed down after widespread protests.

Fewer than 2,000 legal terminations are carried out in Poland each year, although women’s rights groups estimate that up to 200,000 abortions are performed either illegally, or abroad.

Anne Applebaum, the author of several books about Poland and the wife of a former Polish foreign minister, summed up the cruel nature of the new laws in a tweet:

“Abortion was banned in Poland already: exceptions were made for rape, incest, a mother in danger of dying and fetuses so malformed they wouldn’t survive. The new law takes that away; it will force women to give birth to babies that will die. That’s the only point of it,” she wrote.

Esther Major, a senior researcher at Amnesty International, says that the judgement is the result of a coordinated systematic wave of attacks on women’s human rights by Polish lawmakers, and represents their latest attempt to ban abortion in Poland.

“Legal prohibitions on abortion do not prevent abortion or reduce the rates of abortion; they serve only to damage women’s health by pushing abortions underground or forcing women to travel to foreign countries to access abortion care they need and to which they have a right. Although all women may be affected by this cruel judgement, marginalised groups of women who cannot afford to travel will disproportionately suffer the consequences,” she says.

The response of Poles to the new rules has been furious.

Tens of thousands have taken to the streets in protest with many employing tactics seen most recently in neighbouring Belarus, such as using their cars to block key intersections in city centres. Others have turned their ire on the Catholic church. Last weekend, a group of protesters held a sit-down protest in front of the altar of a church in Poznań, chanting and holding up banners. The disruption caused the priest to break off Mass.

Others, holding banners that read: “You have blood on your hands,” and “Let us pray for the right to abortion” also tried to enter churches in other cities. Several church buildings, including a cathedral in Warsaw, were spray-painted with slogans such as “Abortion is okay” and “Abortion without borders.”

In response, far-right and extremist Christian groups have said they will create a “national guard” to protect the Catholic church and its property, threatening civil unrest.

In an alarming development on October 27, PiS leader and Poland’s de facto ruler Jarosław Kaczyński appeared to back the extremists, calling on supporters to defend churches from “prepared” abortion protests “at any cost”. Many were quick to compare Kaczyński’s address with the declaration of martial law in 1981 by communist leader Wojciech Jaruzelski. Even Jaruzelski’s daughter, now a left-wing opposition politician, made the comparison.

Earlier in the day, responding to the charge that the court’s decision had little support amongst Polish women, PiS sent out several of its female MPs to face the press. The move backfired badly after the women were asked by a journalist if they would make a declaration stating that they were in favour of women having to give birth to, for example, babies without a brain. They refused to answer the question and ended the press conference.

A poll by the daily newspaper Gazeta Wyborcza suggests, however, that it is not just women who oppose the new rules: 73 per cent of Poles “don’t support” the constitutional court’s decision, while 54 per cent claim to “support” the ongoing protests. Almost two-thirds of Poles believe abortion should be legal in certain cases, while only 11 per cent support a total ban. The poll is noteworthy not least as PiS is usually much better at gauging the public mood.

“The protesters are supported by the wider public, taxi drivers, actors, even the police is somehow tacitly welcoming the strike,” says Paulina Lenik, an expert on populism in Central and Eastern Europe at University College London. “Celebrities are financially supporting the (social-media organised) movement. Universities share statements condemning the horrid timing of the court’s ruling. The president of Kraków supported the protests. Medics are on the streets. The only groups supporting the ban are the church, the most conservative group of PiS supporters, and radical Catholics.”

What’s more, she tells Emerging Europe, the protesters have quickly shifted from merely demanding a referendum on the abortion ban to calls for the government to resign, and to restore the rule of law and a secular state. “There has been heightened criticism of the ongoing public financing of the Catholic church in Poland, which by the letter of constitution is a secular state,” she says.

“This shows that the movement is not only about reproductive rights (and composed of leftist fanatics as PiS tries to portray it). Therefore, if Kaczyński’s militance is to heighten, we may indeed face our version of ‘Belarus’, particularly given November 11 (Independence Day) is approaching and that is traditionally a time when extreme nationalist groups head out looking for trouble.”

Anne Applebaum says that the previous set of abortion rules had long been accepted as a “compromise” between religious and non-religious Poles. That the wildly unpopular change was able to happen at all was, she believes, “possible because the constitutional court was illegally and unconstitutionally altered.”

What Applebaum is suggesting is that PiS has gerrymandered Poland’s judicial system so much that there are no longer any independent checks and balances: not even when they might be needed to save the party from its own hubris.

According to Amnesty International, since returning to office in 2015 the Law and Justice government has undermined the constitutional court’s independence and its effectiveness as a check on the executive. Both the Council of Europe’s legal advisory body, the Venice Commission, and the European Commission have censured the Polish government’s interference with the court.

In its September 2020 rule of law report, the European Commission noted that “concerns over the independence and legitimacy of the constitutional court” remain unresolved. In 2017, the EU launched Article 7 proceedings against Poland due to breaches of rule of law, including concerns related to the lack of an independent and legitimate constitutional review.

Before last week, Poland’s most recent abortion law was passed in 1993, the current constitution in 1997. What many Poles are now asking is how were the current rules fine for 23 years and why only now, suddenly, have they been found to be not in compliance with a constitution that post-dates them?

“All of this is a long-term consequence of not respecting the rule of law,” concludes Paulina Lenik. “Now, we face the grim prospect of some of institutions following the ruling and some (claiming the court lacks legitimacy) of not respecting it. From a morally-fuelled dispute over abortion, we have ended up with a constitutional crisis.”