As widely expected, on May 2 the European Commission proposed a budget for the 2021-2027 period which ties European Union funding to the rule of law.

Specifically, the Commission is proposing a new mechanism to protect the EU budget from financial risks linked to generalised deficiencies regarding the rule of law in member states. The new proposed tools would allow the Union to suspend, reduce or restrict access to EU funding in a manner proportionate to the nature, gravity and scope of the rule of law deficiencies. Such a decision would be proposed by the Commission and adopted by the Council through reverse qualified majority voting, making it all but impossible for one or two countries to block punitive measures.

While not specifically named, the new rules are clearly aimed at Hungary and Poland: both countries have been accused of threatening the rule of law in recent times. Late last year the European Commission proposed triggering Article 7(1) of the European Treaty after it concluded that there was a clear risk of a serious breach of the rule of law in Poland. Under current rules, however, any sanction could be blocked by a single member state: Hungary has repeatedly stated that it would do precisely that.

“Warsaw will oppose any European Union budget plan that doesn’t balance the needs of its various member states,” said Konrad Szymanski, Poland’s deputy foreign minister, in reaction to the proposed budget. He dismissed the idea of linking funds to the rule of law as a joke, claiming that “no one in the European Commission takes this instrument that would limit the rights of member states seriously.”

Poland would be the largest single recipient of cohesion funds in the new budget.

“Today is an important moment for our Union,” said European Commission President Jean-Claude Juncker. “The new budget is an opportunity to shape our future as a new, ambitious Union of 27 bound together by solidarity. With today’s proposal we have put forward a pragmatic plan for how to do more with less. The economic wind in our sails gives us some breathing space but does not shelter us from having to make savings in some areas. We will ensure sound financial management through the first ever rule of law mechanism. This is what it means to act responsibly with our taxpayers’ money. The ball is now in the court of Parliament and Council. I strongly believe we should aim to have agreement before the European Parliament elections next year.”

Günther H. Oettinger (pictured above), commissioner in charge of the budget said: “This budget proposal is truly about EU added value. We invest even more in areas where one single Member State cannot act alone or where it is more efficient to act together – be it research, migration, border control or defence. And we continue to finance traditional – but modernised – policies, such as Common Agricultural Policy and Cohesion Policy, because we all benefit from the high standard of our agricultural products and regions catching up economically.” 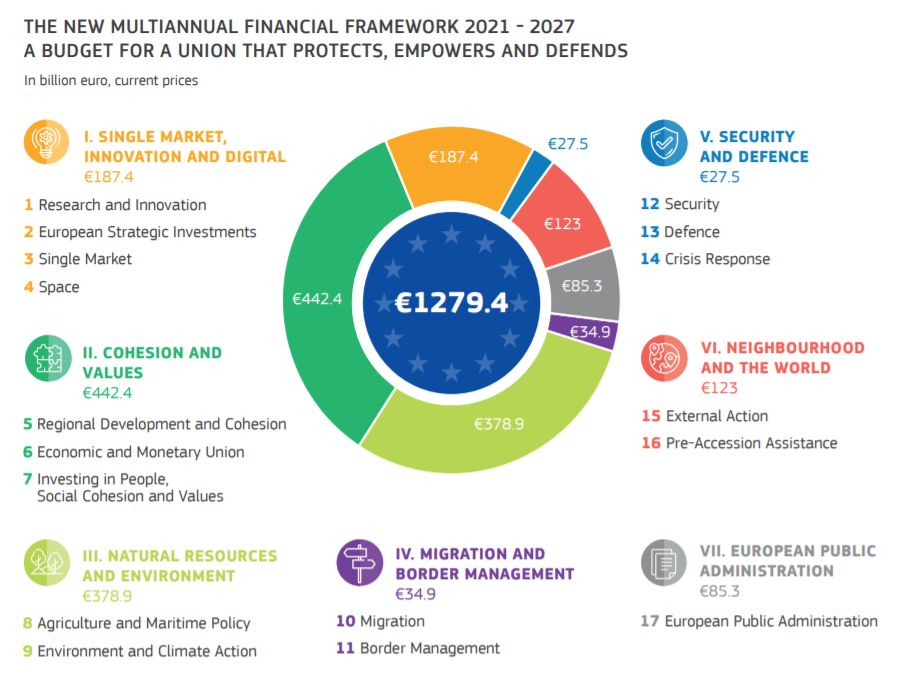 Overall, the Commission proposes a long-term budget of 1.135 billion euros in commitments (expressed in 2018 prices) over the period from 2021 to 2027, equivalent to 1.11 per cent of the EU27’s gross national income (GNI). This level of commitments translates into 1.105 billion euros (or 1.08 per cent of GNI) in payments (in 2018 prices). This includes the integration into the EU budget of the European Development Fund – the EU’s main tool for financing development cooperation with countries in Africa, the Caribbean and Pacific and which to date is an intergovernmental agreement. Taking into account inflation, this is comparable to the size of the current 2014-2020 budget (including the European Development Fund).