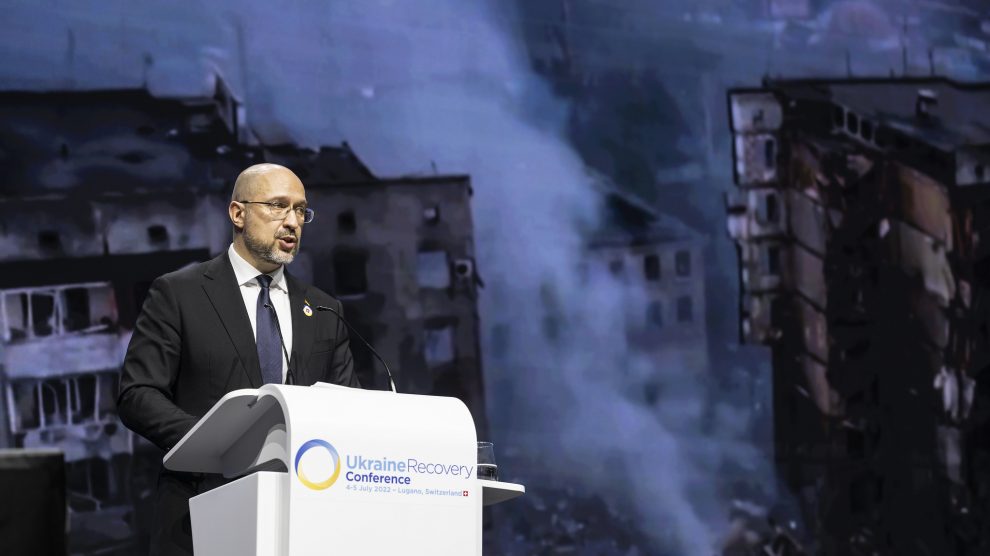 It will cost 750 billion US dollars for Ukraine to recover from Russia’s invasion, says Ukraine’s PM Denys Shmyhal. But donors will want to know their money is being well spent.

A conference taking place this week in Lugano, Switzerland, was originally planned as the fifth Ukraine Reform Conference – an annual event that offers Kyiv an opportunity to highlight reforms made over the past 12 months and to set out priorities for the next year.

Against the backdrop of Russia’s full-scale invasion of Ukraine on February 24, however, the event has been refocused on Ukraine’s reconstruction – which it has been suggested should begin even before the war is fully won.

Renamed the Ukraine Recovery Conference, the event has given Kyiv a unique opportunity to engage with the international partners whose support it will need in order to respond to the enormous challenges that lie ahead.

Not that the event is a donor conference: Ukraine will not leave Lugano with pledges of cash. Instead, as Ukraine’s ambassador to Switzerland, Artem Rybchenko, puts it, Lugano will set out a “roadmap” to his country’s recovery.

Denys Shmyhal, the Ukrainian prime minister, says that Ukraine’s direct infrastructure losses since Russia launched its war amounted to more than 100 billion, and that more than 1,200 educational institutions, 200 hospitals and thousands of kilometres of gas pipelines, water and electricity networks, roads and railways had been destroyed or damaged.

He claims there will be three stages of recovery that together might need more than 750 billion US dollars of investment, of which one third would be from the private sector, and some from Russian reparations and asset freezes.

“The Russian authorities unleashed this bloody war and caused this massive destruction, and should be held accountable for it,” he told leaders assembled in Lugano.

The first stage of recovery would be emergency humanitarian help, such as restoration of water supplies and bridges; the second stage, from 2023 to 2025, would concentrate on repairing destroyed communities through the reconstruction of schools, hospitals and housing; stage three, from 2026 to 2032, would nurture a Ukrainian green digital economy that finally leaves the Soviet era behind, and prepares the country for eventual EU membership.

The need for reform and transparency

Approval last month of Ukraine’s status as a European Union candidate country has established a clear framework for the gradual alignment of Ukrainian legislation with that of the bloc, but with so much money likely to pour into Ukraine over the next decade, there was much talk in Lugano of ensuring it was well spent, and that Ukraine meets it commitments to eradicating corruption.

Swiss President Ignazio Cassis, co-host of the conference, said: “It is crucial that the fight against corruption continues, that transparency and the independence of the judiciary are improved, and that these efforts are not stalled by the war.”

According to Mathias Cormann, secretary general of the Organisation for Economic Cooperation and Development (OECD), Ukraine is working closely with the organisation on an anti-corruption initiative that aims to tackle bribery and other forms of corruption in the country.

The EU has mobilised around 6.2 billion euros in financial support since the start of Russia’s invasion, she said, “and more will come. We will engage substantially in the mid- and long-term reconstruction.”

But she too stressed the need for reform and transparency to ensure corruption did not damage the integrity of any reconstruction programme.

“Donors will need to know not only that their money served a good cause, but that it will be spent efficiently and effectively with maximum impact for the people of Ukraine.”

According to the World Bank, Ukrainian GDP is expected to fall by more than 45 per cent in 2022. Budget expenditures have almost doubled since the beginning of Russia’s invasion due to increased defence spending as well as business and humanitarian support.

Budget revenues meanwhile are projected to decrease due to a reduction in income tax revenues and the temporary abolition of customs duties and VAT for imports. The budget deficit could reach more than 45 billion US dollars by the end of the year, and the bank says that the country needs 30 billion US dollars between now and December.

“Poverty – the percentage of people living below subsistence level – could rise from 18 per cent in 2020 to more than 70 per cent by the end of this year,” says the World Bank’s vice president for Europe and Central Asia Anna Bjerde.

According to the Ukrainian government, more than a third of all enterprises have suspended their operations, about 20 per cent of SMEs have significantly reduced their activities, and others are facing limited export opportunities due to seaport blockades.

Ukrainian President Volodymyr Zelensky, who spoke to the conference via video link, admitted the task of rebuilding the country was “colossal” and was “a common task of the whole democratic world”.

Ensuring that it is a common task would appear to be the first challenge. Ukraine, the EU, the US, the World Bank and other potential donors all currently have their own ideas about exactly how the reconstruction should be carried out.

They all need to be on the same page. Lugano is a start, but making that happen is likely to require more discussion.