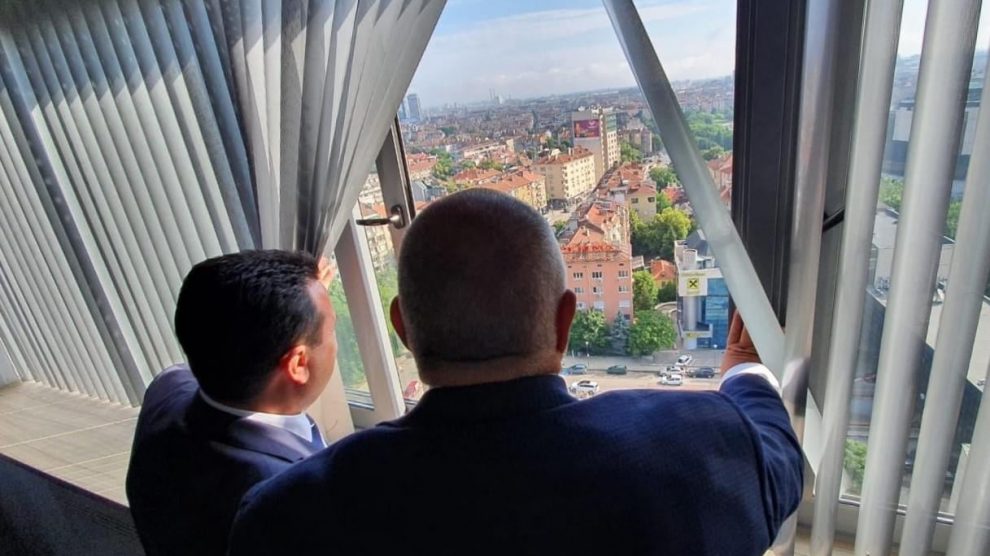 North Macedonia’s prime minister, Zoran Zaev, could have made a tactical blunder in meeting with former Bulgarian PM Boyko Borissov on a visit to Sofia.

North Macedonia’s path towards the EU appeared to have been cleared in 2018 when it agreed a deal with Greece to end a 30-year dispute over the use of the term ‘Macedonia’. But since then, Bulgaria has been placing new obstacles in its way.

Bulgaria has been formally blocking talks since November 2020 over disputes regarding language, ethnic minorities, and historical issues.

His strategy on a trip to Sofia this week has raised a few eyebrows over how he might go about making that happen.

On arrival in the Bulgarian capital, Zaev met first not with representatives of the current interim government, but with the country’s former prime minister, Boyko Borissov.

During their meeting Zaev gifted Borissov a box of cigars, referring to him as his “brother”.

“Were it not for Boyko Borissov and his government, we could today only be dreaming of talking about the first EU-North Macedonia Intergovernmental Conference,” said Zaev.

“If we do not find a solution, as two countries, as two nations, generations of Bulgarians and Macedonians will hate each other,” replied Borissov.

The seemingly cordial relationship between Zaev and Borissov is strange given that it was while Borissov was prime minister that Bulgaria vetoed the start of North Macedonia’s talks with the EU. Forced to resign following his failure to form a new cabinet in the wake of an inconclusive election in April, Borissov made way for an interim administration that will hold the fort until a new election is held in July.

The caretaker prime minister, Stefan Yanev, has stated that his executive is unable to reverse Borissov’s course on the North Macedonia issue as its mandate does not allow it to do so.

However, Borissov himself, who remains leader of the former ruling party, GERB, and will be hoping to return to office following the July poll, suggested to Zaev that it in fact could.

“The current caretaker government has every right to negotiate with you,” Borissov told Zaev. “They can negotiate a new treaty if they don’t like ours, but they will run away from responsibility, as they always do, while at the same time lying to our Euro-Atlantic partners that they are in favour of Northern Macedonia’s EU membership.”

Borissov later posted a photo with Zaev on his official Facebook account with the caption: “We must have a common outlook”, which received a largely positive response from his followers.

Until Borissov’s GERB, in coalition with the nationalist VMRO, blocked North Macedonia’s EU accession last November its policy towards EU integration for all countries in the Western Balkans had broadly been constructive.

The hardening of its stance was therefore viewed by many in Bulgaria as something of a desperate attempt to boost its support ahead of April’s election.

However, the move did not result in any considerable shift in support, hence Borissov’s latest U-turn.

GERB’s official new stance on North Macedonia is largely in line with the slogan of its ongoing election campaign, “Order in the chaos”. Exploiting a growing sense of fatigue amongst voters, the party is keen to present itself as the only source of both internal and external stability.

If GERB is therefore somehow able to return power in July, Bulgaria’s block on North Macedonia will likely be lifted. This, however, seems to be an increasingly unlikely scenario as Gallup International’s latest poll, published on June 11, predicts for the first time that the populist There Is Such A People party (ITN) now has a slight lead over GERB: 21.2 per cent to 21 per cent.

However, if the election is as inconclusive as April’s and the caretaker government – which is close to the country’s president, Rumen Radev, one of Borissov’s most vocal critics – becomes a long-term solution, Zaev’s decision to seek a closer relationship with GERB and Borissov might look questionable.

The battle for Armenia’s future
It’s Belarus, not White Russia: Why rebranding a country starts with its name
Comment