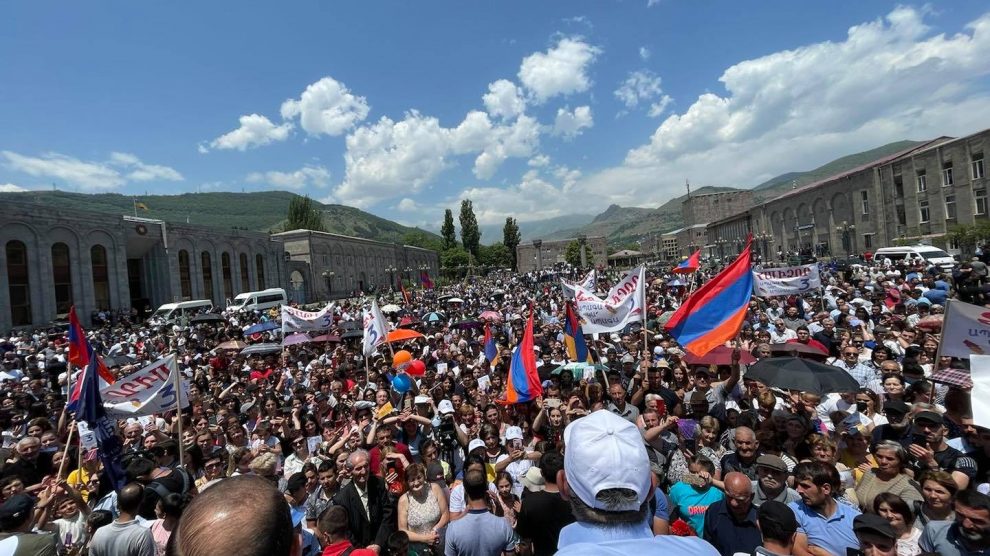 Armenians vote in a snap parliamentary election on June 20, two years ahead of schedule. The country’s future direction is in the balance.

Last November’s ceasefire which ended the latest round of fighting in the disputed region of Nagorno-Karabakh sparked months of protests against Armenia’s Prime Minister Nikol Pashinyan and his administration, blamed for Armenia’s military defeat.

The ceasefire, brokered by Russia, forced Armenia to cede to Azerbaijan most of the territory of Nagorno-Karabakh it had occupied since 1994, with Pashinyan directly accused of mishandling the conflict and failing to adequately prepare the Armenian military for war.

Spearheaded by the Homeland Salvation Movement, the protests demanded the resignation of the beleaguered prime minister, who in March was forced to comply following the publication of an open letter by 40 high-ranking military officers in support of the demonstrators.

On March 18, under mounting pressure, Pashinyan called an early election for June 20.

A third election in four years

Sunday’s vote will be Armenia’s third parliamentary elections in four years in Armenia, and has been spiced up by the return to frontline politics of two former presidents, Levon Ter-Petrosyan and Robert Kocharyan, while a third, Serzh Sargsyan, is heading a competing party, although not standing for election himself.

As such, the election is being portrayed as a battle for Armenia’s future: either a reversion to the past, or a continuation of the reformist path Pashinyan has been attempting to follow since taking office in the wake of 2018’s Velvet Revolution.

Pashinyan, head of the Civil Contract party, which comfortably won an election in 2019 under the umbrella of the My Step Alliance, has been fiercely criticised for Armenia’s defeat in Nagorno-Karabakh, with a major bone of contention being the underutilisation of the Armenian armed forces.

Mobilisation of reserves was halted on the third day of the war, with the prime minister calling for volunteers to instead organise themselves into fighting units. Throughout the conflict, the bulk of the regular Armenian military did not participate in the fighting, with self-organised volunteer units relied on to support Nagorno-Karabakh’s own forces.

Furthermore, critics claim that Pashinyan repeatedly blocked the use of Armenia’s most advanced weaponry, the Iskander ballistic missile, from being used until the last few days of the war, by which time Azerbaijan had made huge territorial gains.

However, despite these criticisms, according to a poll conducted in May by the International Republican Institute, Pashinyan remains the most popular politician in Armenia, with an approval rating of 45 per cent.

Stephen Nix, Eurasia programme director with the International Republican Institute, believes that this is a public endorsement of the liberalising path Armenia has been taking since 2018.

“It is indicative that they [the Armenian public] support the reform agenda of the past two years and are willing to give the government additional time to implement the reforms.”

However, polls published in early June by Marketing Professional Group, a partner of Gallup International, showed that Pashinyan and his Civil Contract party have been rapidly losing support, despite remaining the nominally most popular party. According to the latest poll, just 22.4 per cent of Armenians will vote for Pashinyan – down from over 33 per cent in February.

The biggest challenge to Pashinyan and his party comes from the Armenia Alliance, led by Robert Kocharyan, president of Armenia from 1998 to 2008. Prior to that, he had served as “president” of the breakaway state of Nagorno-Karabakh and last year was acquitted of charges of “overthrowing the constitutional order”.

Kocharyan has called for “fully-fledged modern integration” with Russia and has been one of the staunchest critics of the Pashinyan administration, particularly since the defeat in Nagorno-Karabakh.

It is believed that he may well be the Kremlin’s preferred candidate in the elections – in April, he met with Vladimir Putin, just days before Pashinyan was due to do so, and gave an hour-long interview with a Russian news channel. According to the latest poll, Armenia Alliance’s support is at 20.6 per cent.

While Pashinyan was initially hailed as a reformer, these hopes have been dashed by the realities of geopolitics, not least as Armenia struggled to withstand Azerbaijan’s offensive last autumn. This is reflected in the concerns of voters – in IRI’s May poll, one of the most common answers for the biggest problem facing Armenia was national security.

Relations with Russia will likely remain relatively tight, regardless of who wins. Although Pashinyan has not been as close to Moscow as his predecessors, he has been careful not to alienate the Kremlin either. His most recent meeting with his Russian counterpart saw him return from Moscow with 15,000 doses of the Sputnik V Covid-19 vaccine. Furthermore, none of the openly pro-European parties, such as Edmond Marukyan’s Enlightened Armenia, appear to have any real popularity.

Whatever happens, June 20 will be an important day in the geopolitics of the Caucasus. Regional stakeholders will be watching the election closely.