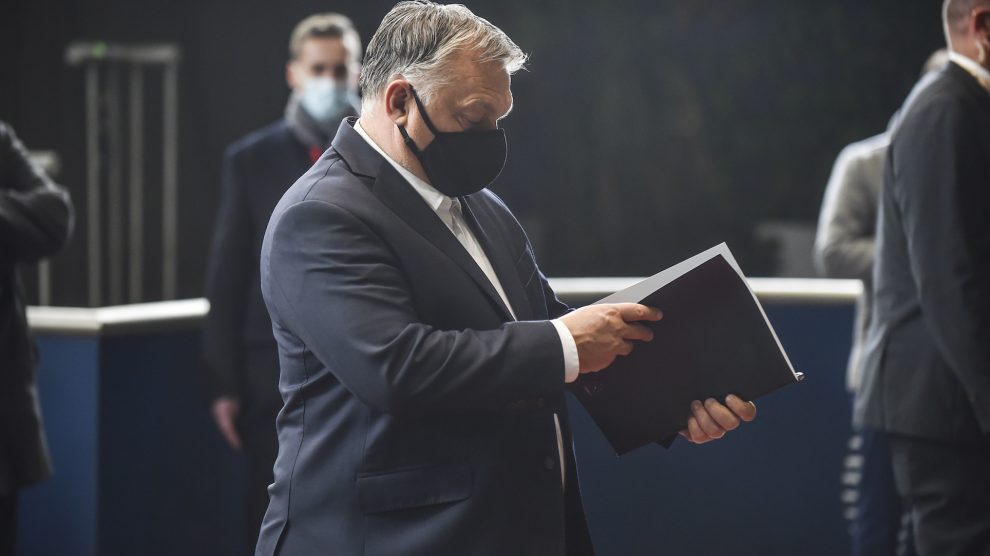 For the first time in more than a decade, Hungarian Prime Minister Viktor Orbán and his Fidesz party face a genuine challenge from a united opposition.

Hungary’s president has called a parliamentary election for April 3, in which the country’s long-serving prime minister, Viktor Orbán, will face the challenge of a united opposition for the first time.

President János Áder announced the date of the election – the earliest allowed – on January 11, also confirming that a referendum on LGBT+ issues proposed by Orbán’s Fidesz party would be held on the same day.

Orbán, who has served as prime minister since 2010 and has in recent years steered the country on an increasingly authoritarian path, picking fights with the European Union over migration and LGBT+ issues, will be up against Péter Márki-Zay, the mayor of Hódmezővásárhely, a small town in southern Hungary.

Márki-Zay is a political outsider with no party affiliation who won a primary election to choose the opposition’s prime ministerial candidate in October last year.

Hungary’s opposition united in 2020 after reaching the conclusion that only collective candidates could defeat Viktor Orbán and his Fidesz party, which has hitherto been favoured by Hungary’s voting system in which the majority of seats in parliament are elected in single-member, first-past-the-post voting districts.

Márki-Zay first came to public prominence in 2018, winning the mayoral race in Hódmezővásárhely, which has a population of just over 40,000 and was previously a Fidesz stronghold. He did so with the backing of the centre-left Socialists and the formerly far-right Jobbik: both parties remain the anchors of Hungary’s united opposition, alongside the progressive Momentum party.

“From April 3, Hungary should belong to everyone,” said Márki-Zay after the date of the election was announced. “On that day, we will replace Viktor Orbán’s heartless, corrupt and greedy system,” he added, suggesting that he wants to make corruption a key issue of the election campaign.

According to Transparency International’s 2020 Corruption Perceptions Index, Hungary placed 69th worldwide and tied with two other countries for 25th place out of 27 EU member states.

“Oligarchs close to the government have accumulated an incomprehensible amount of wealth. Hungary should be a country for all of us, not just those privileged by the connections to Fidesz,” says Márki-Zay.

According to Dominik Istrate, however, an analyst for Central and Eastern Europe at Kesarev, an international consultancy, the issue of corruption failed to resonate with opposition voters in previous elections in 2014 and 2018, and there is no reason why it should cut through this time.

Although often at odds with his more hostile rhetoric towards migrants, refugees, and the EU, as well as curbs on media freedom, Orbán’s supporters point to a broadly successful economic record over the past few years, particularly Hungary’s ability to attract foreign direct investment (FDI).

Earlier this month, Péter Szijjártó, the minister of foreign affairs and trade, said that FDI in 2021 totalled a record 5.3 billion euros, including the largest ever greenfield project in Hungary, a battery plant developed by South Korea’s SK Innovation.

One referendum, or two?

The referendum to be held on the same day as the election will include questions on sex education programmes in schools and the availability of information for children on gender reassignment.

Hungarians will also be asked whether they support a ban on the publication of LGBT+ content that “influences the development of underage children”.

It comes after the Fidesz government last year passed a law that banning educational materials and media content deemed by the authorities to “promote” homosexuality, drawing fierce criticism from the EU, the United States and major international human rights groups.

“The anti-LGBT+ referendum is designed to appeal to the Fidesz voter base and non-affiliated conservatives in Hungarian society,” Istrate tells Emerging Europe. “With a controversial but clear and simple message, it will mobilise ruling party voters and make the general election more ideological.”

It may not, however, be the only referendum held on polling day.

Istrate says that the opposition is pushing for a referendum on the future Budapest campus of the Chinese Fudan University, the site of which had already been allocated for a housing project that would have provided affordable accommodation for university students in southern Budapest.

“The opposition is currently collecting signatures to force a referendum on Fudan. Only time will tell if they succeed: the government wants it held after the general election, not at the same time,” says Istrate, who points out that while the Fudan issue is important to opposition voters, Fidesz’s ideological message is much more powerful society-wide.

“Ultimately, however, the election will most likely come down to the mundane issue of who is better equipped to govern, especially in a time of economic crisis. The vote above all will be a ‘referendum’ on Viktor Orbán and his 12 years as prime minister.”