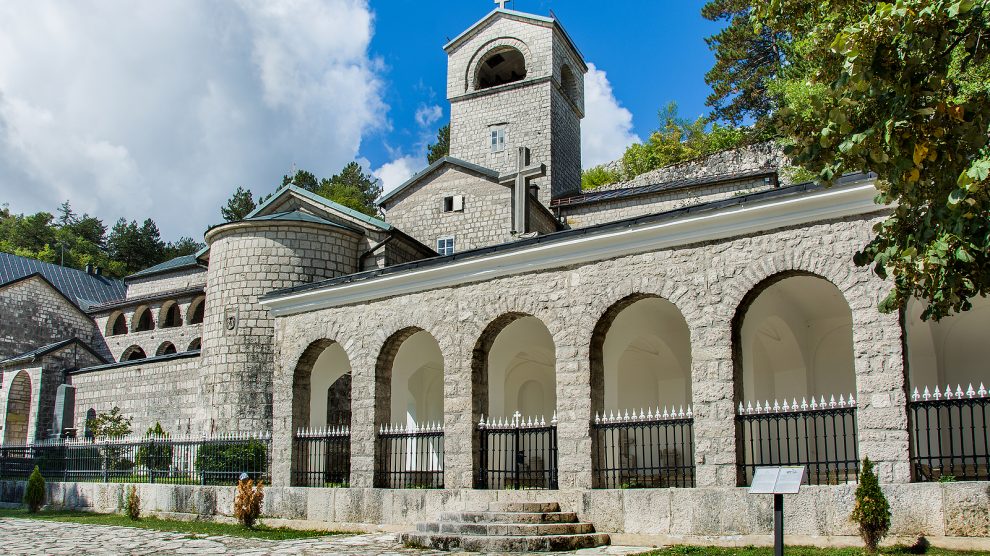 The appointment of a new bishop of the Serbian Orthodox Church in Montenegro has inflamed tensions in the Western Balkans.

In a truly secular country, religion and politics never mix. In the Western Balkans, they are often inseparable.

On September 5, a bishop of the Serbian Orthodox Church (SOC) in Montenegro — Joanikije II — will be formally appointed in a ceremony at Cetinje Monastery (pictured above), the seat of the church. Joanikije takes over from Amfilohije, who died with Covid-19 in October of last year.

Many people in Montenegro are unhappy: not about Joanikije being appointed but because the ceremony is being held in Cetinje.

Thousands protested in the town last weekend, saying that the ceremony would be an insult to Montenegro’s struggle for sovereignty and independence.

“We will not allow further desecration of Montenegrin shrines by those who don’t recognise Montenegro as a state and Montenegrins as a nation,” Predrag Vušurović, one of the protest’s organisers, told the crowd who had gathered to protest.

Authorities in Montenegro are taking the protests seriously. A session of the Committee for Defence and Security was held on August 26 to assess the security situation.

Joanikije has denied accusations that he was “sent” by Serbia, noting that his election as the new bishop had been fully legal.

Joanikije, whose secular name is Jovan Mićović, was previously the bishop of the Budimlje-Nikšić diocese. In May last year, during a religious crisis set off by a controversial Montenegrin law relating to church property, Joanikije was arrested alongside other church officials for leading a religious procession marking the day of Saint Basil of Ostrog.

Analysts are broadly split over what Joanikije’s election and impending inauguration mean for Montenegro and for its relationship with its closest neighbour, Serbia.

“It’s about a man with extreme beliefs, that include denying Montenegrin nationhood, and there is a sizeable number of those who believe that his election was carried out with the direct involvement of Aleksandar Vučić president of Serbia, a continuation of Vučić’s influence in Montenegro,” says Daliborka Uljarević, the executive director of Montenegro’s Centre for Civic Education.

She adds that historically, independent Montenegro picked its own bishop.

“The Cetinje Monastery is not just the seat of the Metropolitanate but also a symbol of Montenegrin statehood and independence. After 2006 [when Montenegro became independent from Serbia] there was an image of autonomy of the Metropolitanate which the previous bishop Amfilohije, despite all the controversy surrounding him, contributed to. One of the first decisions of the new SOC leadership was to abolish this autonomy,” Uljarević explains.

Uljarević believes that the root of the current tension is Serbia’s waning influence in Montenegro.

“Tensions have been increasing lately, and they are essentially conditioned by the meddling of Serbia in internal Montenegrin issues. Vučić is already an important factor in Bosnia and Herzegovina, through Republika Srpska, and he wants similar influence in Montenegro to placate his electorate ahead of the next steps in the process of resolving Serbia’s dispute with Kosovo.”

Zijad Bećirović of the Ljubljana-based think tank IFIMES, sees in the dispute a conflict between two nationalisms.

“We have a conflict between two nationalisms, Serbian and Montenegrin, that is being refracted through the Serbian Orthodox Church in Montenegro. Through a revived Montenegrin nationalism, [Montenegrin President] Milo Đukanović is trying to seize power again even though he now lacks the support of the West to bring down the government,” he says.

But what is truly at the heart of the recent tensions between two countries that are not only culturally extremely similar but share much of their history?

“Just like a quarrel between siblings over material legacy left behind by the last deceased parent, political leaders of Serbia and Montenegro do not see eye-to-eye on many regional issues, international alliances as well as fundamental issues of national identity and political orientation — pro-Western or pro-Russian — including religion,” explains Nina Marković Khaze of the Department of Security Studies and Criminology at Macquarie University in Sydney.

Then there is the status of the Montenegrin Orthodox Church (MOC), an unrecognised (except by the Ukrainian Orthodox Church) church established in 1993 in Cetinje. According to some opinion polls, around 10 per cent of Montenegro’s Orthodox Christians adhere to the MOC, but most remain within the Serbian church.

Uljarević says that Belgrade is using the Serbian Orthodox Church to “project power”.

“This of course, burdens the bad relationship between Montenegro and Serbia, and taking into account that religion holds an emotional charge it can have a potentially mobilising character which some political actors are irresponsibly using,” she says.

For now, there doesn’t seem to be a solution to the current dispute which truly began heating up in December 2019 with the announcement of Montenegro’s religious property law – since adopted and then later repealed following protests – which nationalised religious property if there was no record of ownership prior to 1918, the year when Montenegro joined the Kingdom of Serbs, Croats, and Slovenes (later to be known as the Kingdom of Yugoslavia).

According to Bećirović, the conflict between the two churches does reveal a deeper fault — a “cultural defence” that through conflicting identities ends up strengthening them both.

Nina Marković Khaze points out however that both countries want to join the EU, and friendly neighbourly relations are a key precondition of that.

“While it is also important for the preservation of regional stability to continue to encourage dialogue and cooperative behaviour — including cooperation among religious groups in Montenegro — it is equally important not to give space in public discourses to inflammatory commentary from any side,” she tells Emerging Europe.

It’s clear that if Serbia and Montenegro are to move forward, the tensions will have to die down.

“Everyone in Montenegro needs to be wise at this moment, we need reconciliation to resume our path towards the European Union. It’s very important that everyone does all they can to calm things down,” says Milan Radović, the programme director of Podgorica-based Civic Alliance.

Kosovo’s Euro-Atlantic cracks: Elsewhere in emerging Europe
Despite being popular with voters, Estonia’s president is unlikely to get a second term
Comment