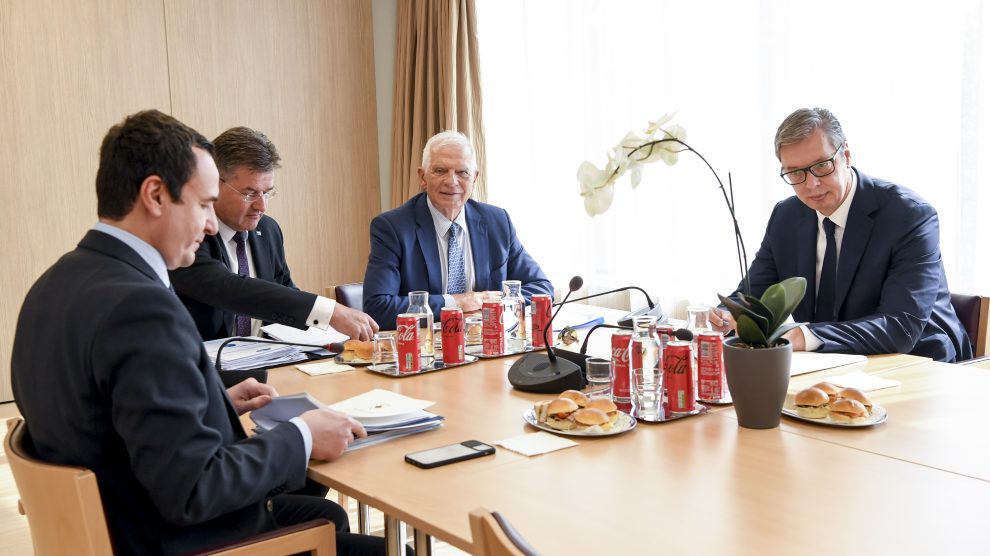 The first meeting in several months between Serbian President Aleksandar Vučić and Kosovo’s Prime Minister Albin Kurti brought no end to the current dispute between the two countries.

Little was agreed at a meeting between the Serbian President Aleksandar Vučić and Kosovo’s Prime Minister Albin Kurti in Brussels on August 18, meaning that there is a real possibility fresh clashes could erupt on the border of the two countries at the end of the month.

The meeting between the two leaders was the first since May and the first since tempers flared last month after the Prishtina government said it would oblige Serbs living in the north of Kosovo, who are backed by Belgrade and do not recognise Kosovo’s institutions, to start using car license plates and ID documents issued by Kosovo.

The rules, which match a long-standing practice in place for Kosovo citizens in Serbia, were due to come into force at midnight on August 1.

In response, ethnic Serbs in northern Kosovo blocked roads leading to two key border crossings, forcing Kosovo police to close the two crossing points. Kosovo police said that shots were fired “in the direction of police units but fortunately no one was wounded“ and that protesters beat up several Albanians passing on the roads that had been blocked and that some cars had been attacked.

It was only after an emergency meeting between Kurti, President Vjosa Osmani and the US ambassador in Kosovo, Jeffrey Hovenier, that Prishtina backed down and postponed implementation of the new measures for 31 days, until September 1. It had been hoped in some EU circles that the meeting in Brussels would resolve the dispute.

According to Ivana Stradner of the American Enterprise Institute, new flare ups remain a possibility, despite the resumption of direct talks between the two leaders.

“I think escalations will continue regardless of the talks this week,” she says. “It’s still a frozen conflict, that has been used and will be used for scoring domestic points. Also, Moscow has already been setting informational conditions for further destabilisation by keeping the Balkans on the edge of a new conflict in order to distract Europe from the war in Ukraine. Hybrid warfare is real and the West should take it seriously.”

NATO certainly believes that an escalation of tensions is possible, with its boss Jens Stoltenberg, who met Kurti and Vučić separately on Wednesday, saying the organisation is ready to increase its presence in Kosovo if necessary. NATO currently has around 4,000 troops in Kosovo, who have a UN-sanctioned mandate to intervene if Kosovo’s territorial integrity is threatened.

“If needed, we will move forces, deploy them where needed and increase our presence. We have already increased the presence in the north. We are ready to do more,” Stoltenberg said.

European Union-led talks between Kosovo – which declared independence in 2008 – and Serbia began in 2011, but have so far failed to achieve any normalisation of relations. Kosovo is recognised by about 100 states, including the US and most EU countries, but Serbia and allies – including Russia – refuse to do so. Serbia continues to view Kosovo as its own territory.

The EU has placed a great deal of effort into restarting dialogue between Belgrade and Prishtina, and the simple fact that Kurti and Vučić met has been spun as a positive.

The EU’s foreign policy chief Josep Borrell said after the meeting that “we did not get to an agreement today but that is not the end of the story”.

“Both leaders agreed that the process needs to continue and the discussion will resume in the coming days,” he said, adding, “there is still time until September 1. I will not give up.”

Nevertheless, Stradner is critical of the EU’s approach.

“I am afraid that the EU does not have a clear plan for the Balkans,” she tells Emerging Europe.

Both Serbia and Kosovo must end their dispute if either is to join the EU. Stradner believes that recent statements by European leaders, and the uncertainty regarding the future expansion of the bloc, have not made the process easier.

“The European Union has made a lot of mistakes so far, notably by using the carrot much more than the stick. But the other issue is why does the EU, especially after French President Macron’s statement a few years ago questioning the further expansion of the EU, not make it clear whether this expansion is real or not?

“Leaders in the West should be honest: do they really want the Western Balkans to be part of the European Union?”

Photo: Albin Kurti and Aleksander Vučić with the EU’s Miroslav Lajčák and Josep Borrell at their meeting in Brussels. © European Union.

How Russia’s war on Ukraine impacts travel and tourism
Strategic deadlock in Ukraine: This week in emerging Europe
Comment