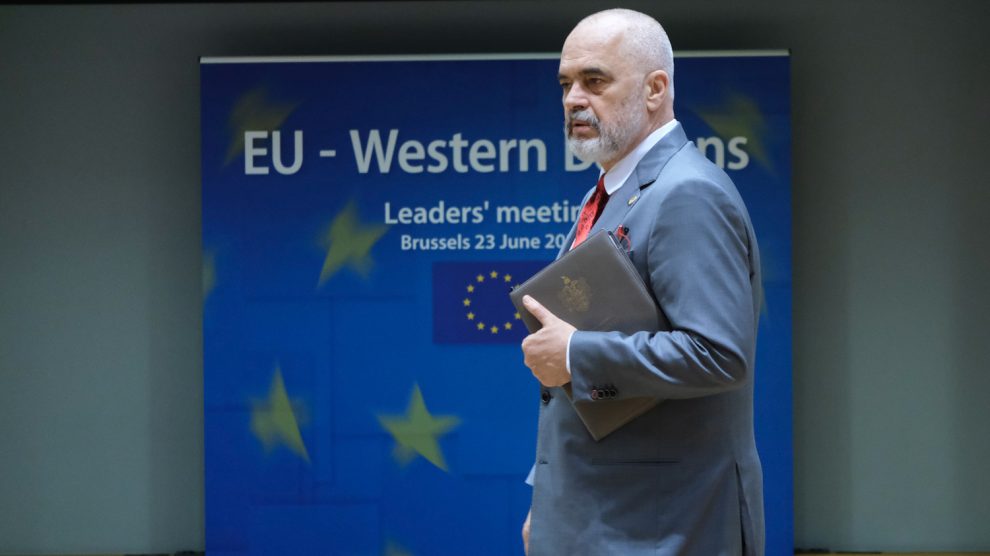 Ukraine grabbed the headlines at last week’s EU summit in Brussels when its status as an EU candidate country was confirmed by the European Council. For several Western Balkans states – many of which have been EU candidates for some time – there was far less to get excited about.

Ukraine, along with neighbouring Moldova, was officially made a European Union candidate on June 23, when EU leaders unanimously nodded through the European Commission’s recommendation, made the previous week, that the pair be allowed to take this first step towards eventual full membership.

Shortly afterwards, in a televised message to the Ukrainian people, the country’s president, Volodymyr Zelensky, compared the EU’s decision to other historic moments in Ukraine’s history and said the country’s path to the EU was “irreversible”.

As irreversible as it may be, Ukraine’s path to full membership is likely to be painfully slow.

The decision to grant it candidate status is a welcome shot in the arm and moral boost for a country currently fighting against a brutal Russian invasion, but it should expect few favours from the EU from here on in.

“[Ukraine and Moldova] have much work to do before moving to the next stage of the accession process,” said Commission President Ursula von der Leyen shortly after the European Council’s decision.

That “next stage” is the beginning of accession talks: countries wanting to join the EU must bring their laws and regulations into line with the bloc’s standards, achieved by negotiations in 35 policy chapters, ranging from the free movement of workers to taxation and agricultural and economic policy.

The talks take years to complete, although as some Western Balkans countries will testify, even starting them is proving difficult.

Albania has held candidate status since 2014, while North Macedonia has been an EU candidate since 2005. Neither has yet to begin accession talks due to a Bulgarian veto that impacts both countries (the pair’s accession bids are twinned). Sofia wants Skopje to make amendments to its constitution that would protect the rights of the Bulgarian minority living in North Macedonia before the veto is lifted.

Edi Rama, Albania’s prime minister, told France 24 this weekend that, “EU candidate status is a kind of anti-depressant pill to boost the morale of countries.”

Rama has become increasingly frustrated by the lack of progress on his country’s EU membership bid, initially threatening to boycott an EU-Western Balkans summit last week, held on the sidelines of the European Council meeting.

After reluctantly attending, Rama was nevertheless unforgiving in his criticism of the EU’s leaders. At a lively press conference he railed against not only the delay in Albania and North Macedonia beginning accession talks, but also the failure of the EU to lift visa requirements for Kosovo citizens travelling to the bloc, and its refusal to offer Bosnia and Herzegovina candidate status.

According to Branimir Jovanovic, an economist at the the Vienna Institute of International Economic Studies (wiiw) and lead author of a new study on the subject of EU-Western Balkans relations, “things cannot go on as they are”.

“Previous EU policies have failed to advance regional economic integration, led to little progress towards EU accession, failed to speed up economic convergence and caused great disappointment in the region,” he says.

The study by wiiw and the Bertelsmann Foundation looks at what a new EU strategy for the Western Balkans should look like and what lessons can be learned from the previous enlargement rounds with the EU member states from Central and Eastern Europe (EU-CEE).

It finds that EU accession of the EU-CEE countries has increased trade in goods and services
between these countries by 50 per cent, and that the main reason for this was the steep increase in incomes in the years following EU accession.

For example, GDP per capita measured in purchasing power parities rose massively in the four Visegrád countries – Czechia (29 per cent), Hungary (19 per cent), Poland (32 per cent) and Slovakia (44 per cent) – between 2004 and 2007, as well as in the other countries in Central and Eastern Europe that joined the EU.

These higher incomes led to rising demand for products from the region and thus also to a rise in supplies, intensifying these countries’ economic integration.

Transfers from the EU budget to the new members proved to be the main factor driving the rise in
incomes in these countries. A doubling of annual EU funds from one per cent of GDP to two per cent led to an average increase in GDP of no less than 14 per cent in the EU-CEE countries.

In addition, higher government spending, higher foreign direct investment, greater political stability and better institutions also boosted economic performance and are likely to be in good part attributable to the EU accession of these countries.

“The implications of these findings for the Western Balkan states are obvious,” says Jovanovic. “The
best way to improve regional cooperation in the region is to have policies aimed at raising incomes. The most effective way for the EU to achieve this would be higher transfers from the EU budget to
these states.”

The study therefore argues for full and direct access to the EU budget for the Western Balkan states
even before EU membership. Higher transfers should be linked to strict conditions for institutional
reforms, because additional funds can only be absorbed with better institutions and governance.

“The costs for existing EU members would be negligible, below 0.05 per cent of GDP for all the countries, but the benefits for the Western Balkans would be huge,” Jovanovic calculates.

Compared with the influx of funds from the Covid-19 reconstruction fund NextGenerationEU into the
member states from Central and Eastern Europe, the EU’s economic and investment plan for the
Western Balkans presented last autumn looks rather tiny.

The sum of nine billion euros earmarked in the plan, in annual terms, equals only one per cent of the region’s GDP. In contrast, the EU members from the CEE region will receive money amounting to three-five per cent of their GDP annually from the Covid-19 reconstruction fund.

“This means that there is a danger that the countries in the Western Balkans will fall even further
behind economically compared with the EU-CEE region,” fears Jovanovic.

All the more reason for he and the co-authors of the study to plead for full access to the EU budget for the Western Balkan states, albeit under strict reform conditions.

Membership must remain a priority

However, such an integration step ahead of full membership should in no way replace or undermine the EU accession outlook for the Western Balkans.

On the contrary, membership of Albania, Bosnia and Herzegovina, Kosovo, Montenegro, North Macedonia and Serbia in the European Union must be a top priority, the study warns.

“Otherwise, there is a danger that frustration in these countries will grow even greater and that the door will be opened to Russia’s attempts to influence them,” Jovanovic argues.

“The Ukraine war has shown us where this leads. There is a danger that Vladimir Putin’s great power
fantasies will once again turn the Western Balkans into a powder keg if we don’t finally anchor them
firmly in Europe.”