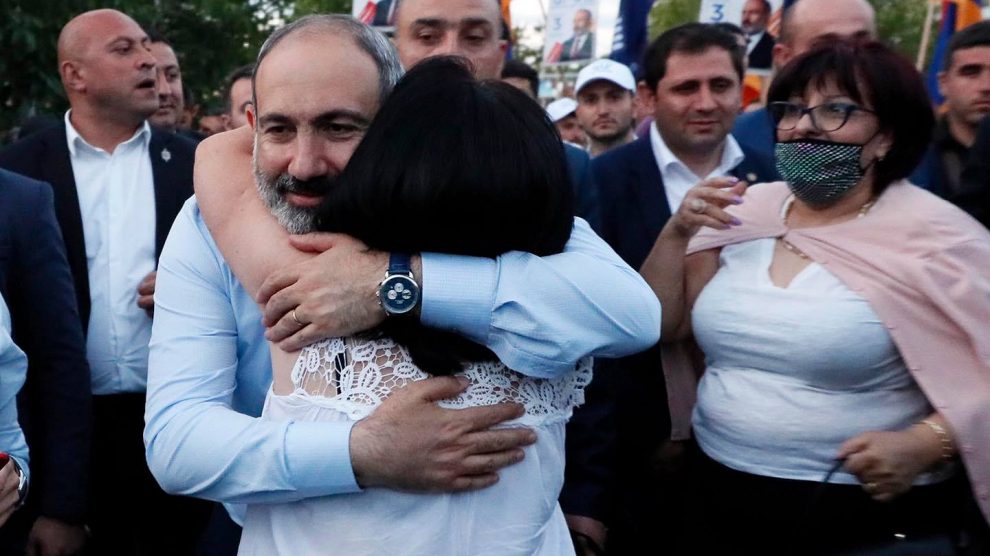 Armenia’s embattled prime minister, Nikol Pashinyan, managed to overcome the fallout of a disastrous defeat in last year’s war with Azerbaijan to win a landslide victory in a parliamentary election on June 20.

A parliamentary election in Armenia on June 20 was widely viewed as a battle for the country’s future: would Armenians choose to revert to the past, or vote to continue along a reformist path, led by Nikol Pashinyan, who first took office in 2018 following what has become known as the Velvet Revolution.

The result was not even close, with Armenians voting overwhelmingly for the latter: Pashinyan’s Civil Contract party took 53.92 per cent of the vote. The Hayastan bloc, an alliance led by a former president, Robert Kocharyan, came a distant second with 21.04 per cent of the vote.

Despite Kocharyan’s claims otherwise, both local and international observers signed off on the election as free and fair, noting, however, some isolated, non-systemic violations.

The election was contested by many familiar faces. Aside from Kocharyan, another former president, Levon Ter-Petrosyan, was in the running, as well as a former head of national security, Artur Vanetsyan. The latter, head of the I Have Honor bloc and closely affiliated with yet another ex-president, Serzh Sargsyan, came third and will take seats in parliament.

When Pashinyan took office in 2018 as the leading figure of the Velvet Revolution, which ousted Sargsyan and his government from power, his then coalition party My Step won what were widely viewed as the country’s first free and fair elections since independence from the Soviet Union in 1991.

Just two years later, his popularity was already on the decline, with many Armenians frustrated at the slow pace of reform.

His popularity then tanked following a disastrous defeat in a six-week war with Azerbaijan over the disputed region of Nagorno-Karabakh. Pashinyan was accused of at best leaving the Armenian military and Nagorno-Karabakh forces unprepared for the war, and at worst, of actively hampering an effective military response.

The Russia-brokered peace deal that ended the fighting last November shocked the Armenian public. Large tracts of Nagorno-Karabakh were handed back to Azerbaijan, despite the majority of the territory remaining in Armenian hands. Many Armenians considered this to be a humiliating failure and laid the blame squarely on Pashinyan and his administration. This led to a months-long political crisis which saw near daily protests, open insubordination by high-ranking military officers and intense political conflict. Pashinyan appeared to be losing his grip on the country.

The crisis was defused when Pashinyan, in a major gamble, declared that snap parliamentary elections would be held, two years ahead of time.

A vote against the old guard

Although the election can certainly be considered a legitimisation of Pashinyan’s reformist path, it appears that more than anything, it was the identities of the main opposition figures that allowed Pashinyan to secure victory in the latest elections.

Robert Kocharyan, for example, was president of Armenia from 1998 to 2008 and has been accused of ordering a brutal crackdown on protests in 2008 which led to the deaths of 10 people.

As such, June 20’s result could be viewed as a vote against the Armenian old guard rather than a vote for Pashinyan. For much of the Armenian public, the old guard represents a reversion to the past, when Armenia’s political system was dominated by small a circle of politicians supported by powerful oligarchs, not unlike Vladimir Putin’s Russia.

“Robert Kocharyan’s problem was that there were a large number of people who were against Nikol Pashinyan, but were not ready to vote for him [Kocharyan],” says Alexander Iskandaryan, an Armenian political analyst with the Caucasus Institute.

Anna Ohanyan, a scholar at the Carnegie Endowment for International Peace, agrees.

“Kocharyan’s return to the political scene had a mobilising effect in favour of Pashinyan. Large segments of undecided voters in the end voted for Pashinyan, signalling their continued support for the velvet trajectory despite their frustrations with Pashinyan and his government.”

These notions are backed up by the figures. More than 46 per cent of the population voted against Pashinyan and his party. Furthermore, voter participation was relatively low, at just under 50 per cent. This implies that a good chunk of the population still harbours a degree of apathy towards both Pashinyan’s party and the old guard.

Furthermore, not all Armenians were happy with the outcome of the election. Protests were held in Stepanakert, the capital of the Armenian-held part of Nagorno-Karabakh, after the breakaway state’s “president” congratulated Pashinyan on his victory.

In a victory speech on June 21, Pashinyan announced that if his 2018 victory was the Velvet Revolution, this year’s would be a Steel Revolution. He promised that those “who robbed the country and profited while hundreds of thousands became poor and had to leave” would face justice, possibly an attempt to remedy perceptions that his government has been too lenient – so far – with the country’s oligarchs. Other than that, there have so far been few clues as to how Pashinyan intends to rule in his second term.

On the foreign policy front, little is projected to change. Although Pashinyan is not as pro-Russian as his predecessors, he has maintained relatively close relations with Moscow, particularly since the defeat in Nagorno-Karabakh. The Kremlin congratulated Pashinyan on his “convincing” reelection, a relatively significant endorsement. Pashinyan’s Armenia could be one of Moscow’s few democratic allies.

However, security challenges remain. Armenians continue to perceive any moves made by Turkey and Azerbaijan to be inherently driven by hostile intentions towards Armenia, and many are reluctant to pursue any kind of rapprochement.

Recent Azerbaijani manoeuvres have seen its armed forces enter Armenia’s Syunik province. Pashinyan has again come under fire for his muted response and foreign minister Ara Ayvazyan resigned on May 27 in protest.

Nevertheless, Pashinyan has clearly established, both domestically and internationally, that a sizeable proportion of the Armenian public is prepared to follow through with reform, despite the difficulties.

Now, he has an even clearer mandate to push on.