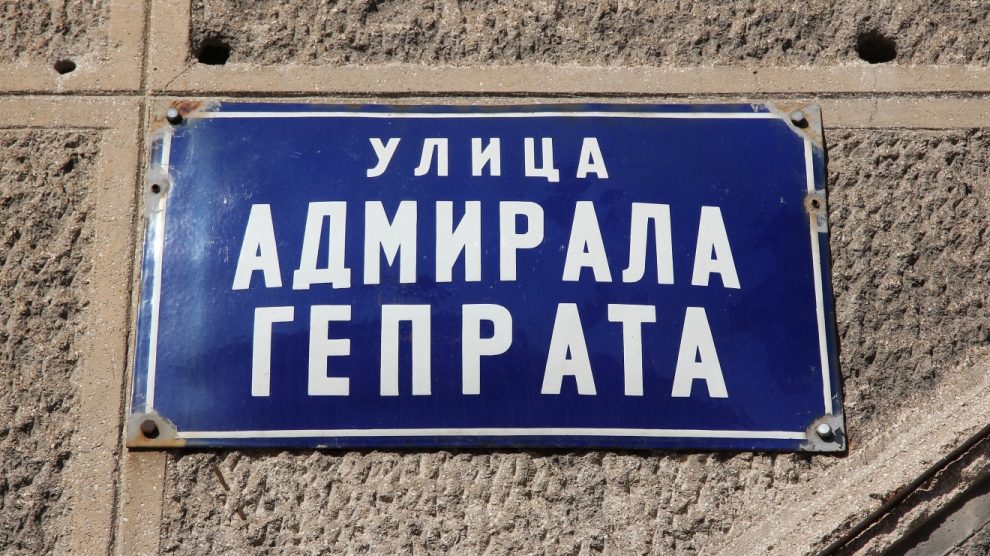 Belgrade’s city government is pushing forward with its policy of renaming Yugoslav-era streets. With other capitals in the former Yugoslavia having done so in the 1990s, Yugoslavian multiculturalism seems headed for the dustbin of history.

Osječka Street in Belgrade, named after the eastern Croatian town of Osijek, is the latest in the Serbian capital to find itself with a new monicker.

The street is now dedicated to Dragan Nikitović, a well-known Serbian sports commentator.

It is the latest in a veritable renaming spree, which historians and activists alike have heavily criticised, that began last year with loss of another Croatian toponym. Back then, Zagorska Street, from the region of Zagorje, was rechristened Blagoja Jovovića Street in honour of Blagoje Jovanović, the man who attempted to assassinate Croatian Ustaše leader Ante Pavelić.

Zadarska, Zagrebačka, Bjelovarska, Hvarska, Hrvatska streets followed — all conspicuously Croatian names. Even Vatroslav Lisinski, the Croatian-German composer, has not been spared. He has been replaced by Bogdan Tirnanić, a noted Serbian essayist and movie critic.

This time last year, the city’s deputy mayor, Goran Vesić, said that streets in Belgrade should bear the names of “people to whom Serbia is indebted, along with friendly nations and peoples”.

Of the streets originally slated for renaming, only a few have yet to be changed — Podravska, Šibenička, and Splitska.

Their end is no doubt nigh.

Historians and public figures have come out in unison against the campaign, claiming that it is erasing history from public memory. Perhaps more perniciously, they have argued, it also erases the history of anti-fascist struggle. Especially controversial was adding Blagoje Jovanović, due to his involvement in the Chetnik movement which collaborated with Nazi occupation forces.

But the campaign is also in line with a broader cultural movement in Serbia that wants to downplay the importance of the Partisans in the war against the Axis powers and to rehabilitate the Chetnik movement by minimising its association with the Nazis.

“Naming and renaming streets, especially in places where political loyalties are conflicting, is an ordinary activity. Naming a street for Osijek was a gesture designed to promote feelings of fellowship with cities and people across the territory of what was once Yugoslavia, just like renaming it after an admired public figure is a gesture designed to reflect the culture of the city,” explains professor Eric Gordy of UCL’s School of Slavonic and Eastern European Studies.

However, he adds that where the campaign becomes problematic is when it follows a consistent ideological pattern.

“In the frenzy to remove names associated with the communist period several names were removed that were more reflective of anti-fascism than with communist ideology specifically — the renaming of 14. decembra [December 14, the date of large scale anti-fascist student protests in Serbia in 1939] to Cara Nikolaja is one example,” he explains.

“And, of course, names representing sentiments of kinship and solidarity with people in neighbouring states have been steadily disappearing. Taken as a whole, the shift indicates that a great many things are at stake in names, not least the overall cultural atmosphere.”

A show of power

Dubravka Stojanović, a history professor at the Faculty of Philosophy in Belgrade, and a staunch critic of the campaign, says that Deputy Mayor Vesić – along with the Serbian Progressive party-led government – is looking to show off its power.

“They want to demonstrate that they can do whatever they want. Belgrade is ideal for that kind of politics, because everything can be seen clearly and a message sent to the whole of Serbia,” she tells Emerging Europe.

“This government rests upon xenophobia and autism, it’s pathologically nationalistic, stemming from the ideology of the Serbian Radical party [whose leader Vojislav Šešelj is a convicted war criminal]. That’s why its representatives have the need to isolate Serbia, make it a periphery, a small town, scared of the world it doesn’t understand,” she says.

In most cities and towns in the former Yugoslavia, street names connected to the now defunct country were changed during or in the aftermath of the Yugoslav Wars.

Despite this, historians warn that reciprocity may not be the best idea and that erasing history is not the answer.

“[Vesić] hates Belgrade, its openness and plurality and is fighting to defeat it. For now, he’s succeeding, but Belgrade is trying to fight it,” concludes Stojanović.