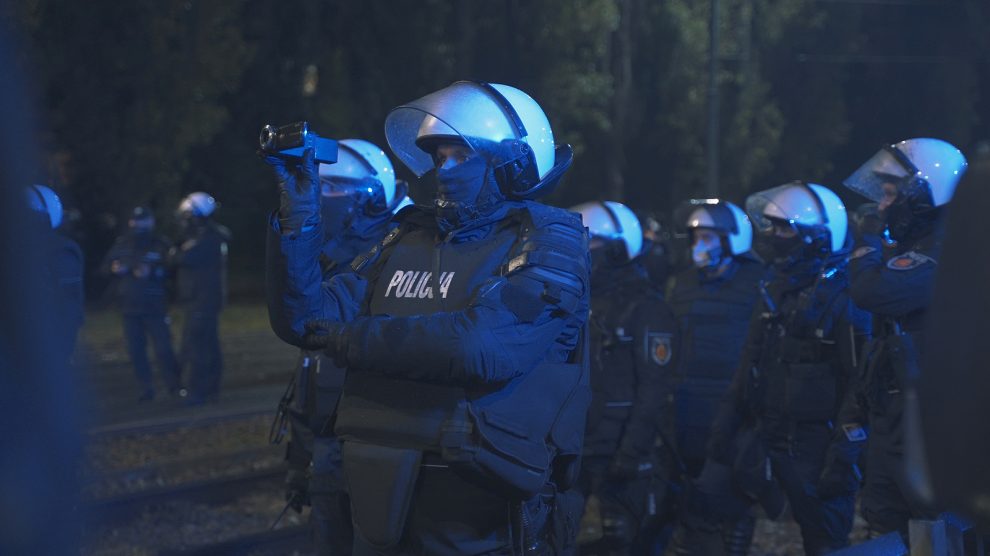 Recent events in Poland have highlighted the country’s need to tackle police brutality, which some analysts link to the country’s political climate.

On the night of February 6, 2015, police forced their way into an apartment in the Polish city of Kraków following a report of a knife attack in the building.

Living in the apartment was Sebastian Mętel, as well as his girlfriend and their five-month-old baby girl.

The police proceeded to spray tear gas into the living space, despite a five-month old baby being present, claiming that the knife attacker was hiding in the apartment.

When owner Mętel called out for assistance, a neighbour, Robert Kuchta, appeared on the scene, who was subsequently handcuffed and beaten by police.

More than six years later, on September 2, 2021, the European Court of Human Rights (ECHR) ordered Poland to pay each of the mean 25,000 euros in damages, ruling that they had been ill treated by police.

The police were found to have violated Article 3 of the Convention on Human Rights, which asserts that, “no one shall be subjected to torture or to inhuman or degrading treatment or punishment”. Poland was further found to have failed to thoroughly investigate the case.

Not an isolated case

“The case Kuchta and Mętel v. Poland is yet another ECHR ruling which reveals that police officers use coercive measures disproportionately during arrests, and that cases of abuse of power by officers are not reliably investigated,” the head of the Polish National Preventive Mechanism (NPM), Przemysław Kazimirski, tells Emerging Europe.

“In recent years, the NPM has observed with great concern the increasing violence of police officers,” Kazimirski adds

Patryk Wawrzyński of Alpaka Innovations, a Polish organisation focusing on developing emotional and social intelligence in the workplace, mirrors Kazimirski’s sentiments, describing the actions of the police as “unjustified, excessive and harmful”.

Wawrzyński says that unnecessary police violence is perpetuated by conditions within the working environment.

“Experienced officers suggest that Polish law enforcement is heavily underfunded, training has been reduced and limited, while salaries deter qualified candidates from the service,” he tells Emerging Europe.

“Nowadays, open-minded candidates do not consider the police as an interesting career choice, and numerous vacancies are filled with incompetent persons, often with links to nationalist or neo-fascist movements,” Wawrzyński argues.

“When police officers are authorised to pepper-spray opposition MPs during pro-choice manifestations or to use excessive force against protesting women, why control themselves when facing criminals, detainees or drug users? It inspires police brutality,” he says.

Jacek Kucharczyk, president of the executive board of the Polish public policy think tank Institute of Public Affairs, similarly says that, “this sense of impunity has been likely to contribute to increasing police brutality in dealing with regular, even unthreatening offenders”.

“This can be seen just by looking at the deaths of three different people during police detention in the last month alone,” Kucharczyk tells Emerging Europe.

Wawrzyński believes that the seemingly growing use of excessive police force can be attributed to the political climate in the country.

“The police is strictly politically controlled by the right-wing government. Its leaders understand the police as being a means of political pressure on the opposition, and populist policy-making focused on emotional issues as pedophilia or corruption,” he argues.

“The Polish police had come under increasing political control following the ascent to power of the right-wing populist Law and Justice (PiS) party in 2015. The PiS-led government had put political loyalists in charge of the police and ensured the loyalty of rank and file functionaries with generous wage and benefits rises,” he says.

His words come shortly after the events of September 10, when a memorial event in honour of the deceased former president of Poland, Lech Kaczyński, turned into a protest against the departed’s brother – the current PiS leader Jarosław Kaczyński.

The protesters accused the head of PiS of murdering his brother for personal gain, which resulted in Kaczyński asking the Interior Ministry to interfere, while hundreds of police officers are said to have been sent to guard his home.

“I believe that Jarosław Kaczyński’s paranoid securitisation of the state might be a reason for police brutality in Poland. He uses law enforcement as an extension of policy-making and political control. Therefore, the police protect party events, right-wing rallies and rites, and his private house in Warsaw,” argues Wawrzyński.

“Law enforcement was a tool to suppress opposition protests against taking control over the judiciary or anti-abortion laws. Therefore, once again – as during the communist dictatorship – the Polish police has one of the lowest levels of public trust among society,” he concludes.