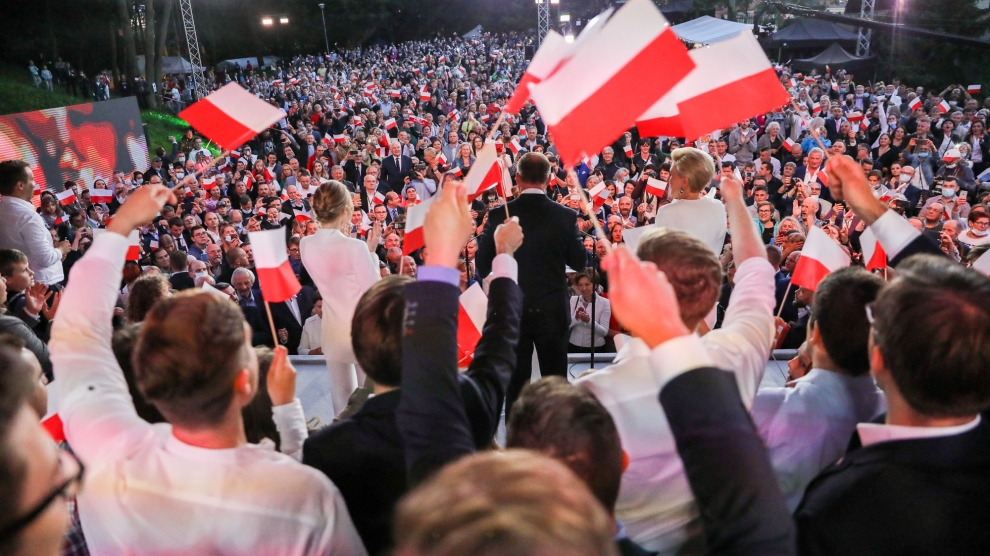 Poland’s incumbent president, Andrzej Duda, has narrowly beaten challenger Rafał Trzaskowski in the second round of a presidential election.

With 99.7 per cent of the country’s constituencies having returned results, the conservative Mr Duda had won 51.2 per cent of ballots.

An initial exit poll put the gap between the two candidates at less than 0.8 per cent, and both men claimed in their speeches that they were confident that they had won. But the mood in the respective camps told a very different story. While Mr Duda looked exuberant, Mr Trzaskowski and his supporters looked as though they knew they had lost.

Turnout in the election was nearly 69 per cent as polls closed, the second highest for any presidential election in Poland since the return of democracy in 1989. It was significantly higher than in the the first round of voting, particularly in smaller towns, which have traditionally favoured Duda, but there were also more than half a million votes from Poles living abroad – who favoured Mr Trzaskowski, the mayor of Warsaw – a record number.

“Thank you to all my fellow Poles who voted for me and cast their votes,” Mr Duda told supporters. “I want to thank you with all my heart because this turnout shows how much you care about our country.”

The vote had been widely seen as a battle for the country’s future direction, as well as its strained relations with the European Union. Mr Duda’s win is expected to strengthen the ruling Law and Justice party (PiS), which backed him, allowing it to make further controversial reforms to the judiciary, which have brought much criticism from Poland’s international partners, as well as renew its attacks on access to abortion – already severely limited in Poland – and LGBT rights. A win for Mr Trzaskowski would have given him the power to veto laws passed by the ruling conservatives.

Mr Duda, 48, had portrayed himself throughout the campaign, the scope of which was limited by Covid-19 restrictions, as a president who has improved the country’s economy over the past five years, but had also pledged to defend “traditional family values” at the expense of LGBT rights. His campaign was laced with homophobic rhetoric, as he turned the fight against so-called “LGBT ideology” into his main point of attack.

At a campaign rally last month, he branded the LGBT rights movement an ideology “more destructive” than communism. Last week, he accused German-owned media of trying to interfere in the election. State media, which has relentlessly backed Mr Duda, also used the highly charged question of Jewish property restitution to mobilise against Mr Trzaskowski.

In his victory speech, Mr Duda continued to appeal to conservative Poles.

“In recent days I have said that I would like a coalition for Polish issues, a coalition for Polish values. I will do everything to make it come about, so that politicians today representing various political options and people who support them, for whom values ​​such as family, our Polish community, our culture, tradition, history, heroism and pride are important, be together in these most important matters, that we support each other, and show that we are one,” said Mr Duda.

However, he did add that, “if anyone has felt offended by my actions or my words, not only during the campaign but in the last five years, please accept my apologies.”

Mr Duda began the election campaign as firm favourite, and when the Covid-19 pandemic first hit Poland in the spring, his support briefly soared towards 60 per cent.

However, after the election was postponed from its original date of May 10, the opposition replaced its struggling candidate, Małgorzata Kidawa-Błońska, whose support had dropped into single digits, with Mr Trzaskowski, and the race narrowed sharply.