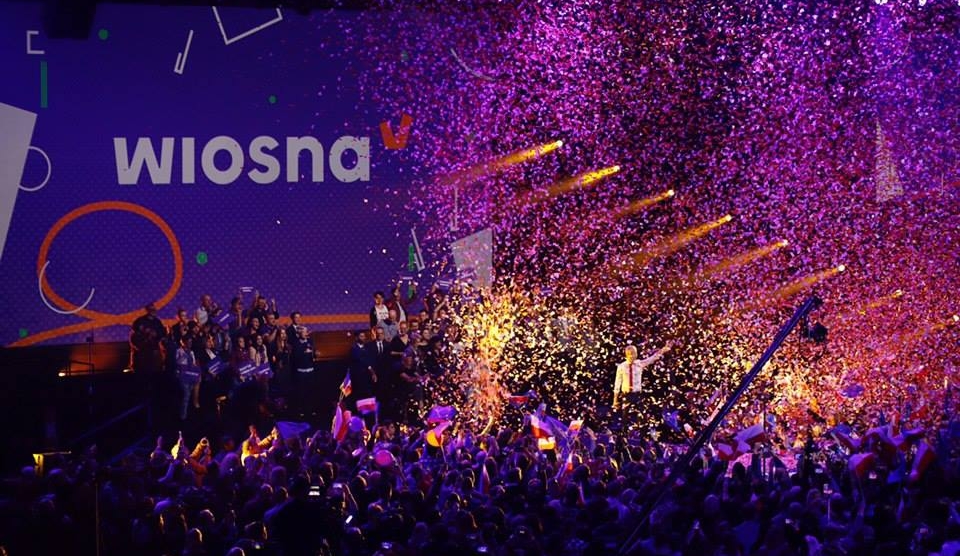 Robert Biedroń, the former mayor of Słupsk and Poland’s first openly gay politician, has launched a progressive, pro-EU party, called Wiosna (Spring), which aims to offer an alternative to the ruling right-wing Law and Order (PiS) party, and the opposition Civic Platform (PO).

The official launch came on February 3, in front of a crowd of thousands, when Mr Biedroń finally announced the name of his party, along with some of its policies.

“These last years have been cold and gloomy,” he told the crowd. “Instead of talks we got unending conflict, instead of common good – party interests, instead of empathy – growing enmity. A frosty winter must end at last. We are the spring, we bring fresh air to Polish politics.”

Mr Biedroń said that the three pillars of Wiosna are the individual, the community and a state that can be trusted.

Wiosna supports liberalising Poland’s restrictive abortion laws and fighting for women’s rights, especially equal pay, stopping deforestation, ending tax breaks for the Catholic Church and removing the obligation for all school children to study religion, guaranteed access to contraception and the recognition of gay partnerships along with a string of generous social spending measures including a new universal old age pension.

The plans are bound to create conflict between Wiosna and the Church, as well as a political establishment that has consistently either supported or shied away from curtailing its influence in a country regarded as one of the most devoutly Catholic in Europe.

Mr Biedroń vowed to continue where Paweł Adamowicz (the Mayor of Gdansk, who was murdered in January) had left off.

“We need positive energy more than ever now. We must fulfil the legacy of Paweł Adamowicz. Our most important value is community. We no longer want Poles to be at war with each other. We want mutual respect and dialogue. The two political parties are trying to divide us into two enemy camps, but we don’t want a war, we want to build the Poland of our dreams together.”

Only a few hours after the announcement both Mr Biedroń and Wiosna were already facing criticism.

Adriana Rozwadowska, a journalist at the newspaper Gazeta Wyborcza, said in an interview with TOK FM:

“The message was stronger than I expected. For many years, we have not had a politician in Poland who would talk so explicitly about, for example, women’s rights. But there was nothing about employees, about the labour market. These are not sexy themes, you can see that he deliberately left them out. He wants to centre his campaign on world-view issues, not economic ones.”

Piotr Trudnowski, from the Jagiellonian Club, agreed with Ms Rozwadowska’s assessment adding that: “I do not think that this is a programme that will be able to attract Poles with moderate, centrist views.”