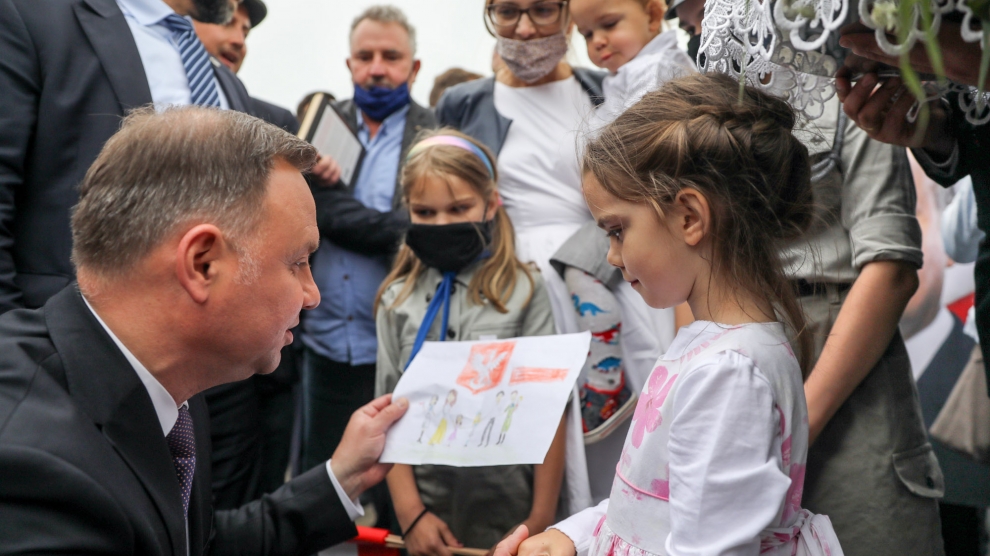 Just two weeks before Poland votes in a crucial presidential election on June 28, the subject of LGBT rights has become the most hotly debated subject on the campaign trail.

With support for the incumbent Andrzej Duda declining, the president has fallen back on tried and tested anti-LGBT rhetoric to rally his conservative voter base, attacking what he calls “LGBT ideology” as a threat to traditional family values. On June 13, in a campaign speech in the town of Brzeg south west Poland, Mr Duda, who is backed by the ruling Law and Justice party (PiS), claimed that “LGBT ideology” was “more destructive” than communism.

“Mr parents’ generation did not fight for 40 years to kick communist ideology out of schools in order for us to now accept that another ideology should arrive, that is even more destructive for people,” said Mr Duda, who later took to Twitter to say that he had been misquoted.

“Yet again, as part of dirty political fight, my words are put out of context. I truly believe in diversity and equality,” he wrote, before adding: “At the same time beliefs of any minority cannot be imposed on a majority under the false pretense of tolerance. In our times truth has become a scared little creature that hides from much stronger correctness.”

In recent weeks both local LGBT activists and the European Commission have criticised the level of homophobia in Poland, which it is claimed is becoming increasingly institutionalised.

LGBT rights in Poland fall far below European standards. In a recent report published by ILGA, an organisation which campaigns for LGBT equality and human rights in Europe and Central Asia, Poland was ranked the most homophobic country in the EU, and there have been a number of attacks on sexual liberties by the government over the past few months.

A recent push by the ruling party to further restrict abortion freedoms and limit sex education in schools has been accompanied by a ramping up of anti-LGBT rhetoric by those on the conservative right.

These attacks against the LGBT community are often accompanied by calls which echo those of Mr Duda – that it is an “imported ideology” and inherently threat to traditional Polish values. This emphasis on the strictly heterosexual nuclear family has been manifested in the declaration of “LGBT-free zones” by the marshalls of a number of regions in the south east of the country (Lubelskie, Łódzki, Małopolskie, Podkarpackie, and Świçtokryzskie), along with over 80 smaller administrative units. The first “LGBT=free zone” was established on March 26 in Świndik, just outside of Lublin. This was accompanied by the conservative newspaper Gazeta Polska distributing “LGBT-free zone” stickers to readers, later withdrawn following an international outcry.

Pressure on these regions to retract their discriminatory declarations has ramped up of late.

On May 27, the European Commission wrote to the respective marshalls in what was the first firm intervention against the homophobic legislation. In the letter, the Commission outlines the key aspects of EU law that the zones are breaking, specifically Article 2, which ensures “pluralism, non-discrimination, tolerance, justice, solidarity and equality between women and men prevail.” This was backed up with a quotation from Article 7 that all member states “shall take appropriate steps to prevent any discrimination based on sex, racial or ethnic origin, religion or belief, disability, age or sexual orientation during the preparation and implementation of European Structural and Investment Fund programmes”, including communications.

The letter gave the marshalls a stark choice – either the comply with EU regulations or lose EU funds. Here, the EU commission outlined the marshalls’ responsibility to ensure that funds are managed in coordinance with EU principles, something which the “LGBT-free zones” openly defy, and instead result in “the citizen’s fear of being discriminated by these authorities, being beaten by other citizens or losing their job.”

This first major intervention by the EU against Poland’s treatment of sexual minorities is a clear signal that the bloc is ready to act. A lawyer at the office of European Commissioner for Human Rights, Anna Błaszczak-Banasiak, notes that: “we cannot be full members of the community if we fail to apply the principle of equal treatment and exclude some of our citizens from social life,” continuing, “I’m glad that the Commission has confirmed the arguments of the Commissioner, who emphasised from the beginning that this was not about ideology or beliefs, but about living people.”

Poland’s government has long maintained the position that it does not exclude LGBT people, but their “ideology”, which is viewed as an attack on traditional family values. However, with the risk of losing EU funds now a real possibility, the government (and its presidential candidate, Mr Duda) stands between a rock and a hard place, having set itself up as an anti-LGBT party to please its conservative voter base.

There was a rare victory for Poland’s LGBT community last week, when gay activists and influencers Dawid Mycek and Jakub Kwiecinski appeared in a TV ad for condom manufacturer Durex, the first time a gay couple have appeared in a TV commercial.

“The Durex campaign is a huge platform and it has an enormous impact in Poland. We think it’s important that this step can show people a different direction. It’s like saying to our community: you are not alone,” said Kwiecinski.

The ad features Jakub and Dawid with two heterosexual couples, something that Mr Kwiecinski says “shows that there is no difference between us”. However, the victory was short lived. State broadcaster TVP refused to air the commercial, and a radical conservative organisation has begun a petition to ban any ads featuring LGBT people in the future, citing that they will “distort children’s views of sexual conduct.”

Again, it seems that any progress towards LGBT emancipation in Poland is immediately halted, and then reversed by the conservatives’ emphasis on the traditional heterosexual family. The advocacy or even visibility of the LGBT community in public spaces is hence “threatening” to many of Poland’s conservatives, including PiS.

Some LGBT Poles have long since left the country, feeling unwelcome. In a survey carried out amongst LGBT Poles in the UK last year, more than one in four respondents (27 per cent) declared that LGBT issues were either the main or one of the reasons why they moved to the UK.

Many of the respondents described Poland using such negative expressions as “homophobia”, “intolerance” and “lack of acceptance”, while they characterised the UK as “tolerant”, “open” and “free”. A 20-year-old lesbian who moved from Poland to the East Midlands in 2018 explained that her migration was motivated by “the possibility of leading a ‘normal’ life: forming a family, getting married, having kids, being accepted.”

Mr Duda is clearly not after her vote. Besides his latest statements comparing “LGBT ideology” with communism, he has also announced that he will, if elected, ban the teaching of LGBT issues in schools.

“Parents are responsible for the sexual education of their children,” he told a crowd of supporters last week. “It is not possible for any institutions to interfere in the way parents raise their children.”

This came in response to the main opposition candidate Rafał Trzaskowski having introduced LGBT issues in Warsaw schools during his time as the city’s mayor. Mr Trzaskowski – who has himself fallen short of supporting adoption by LGBT couples – increasingly looks as though he will be Mr Duda’s opponent in a second round run-off. Recent polls suggest that Mr Trzaskowski has a real chance of defeating Mr Duda in the run-off, and PiS has chosen the “traditional family” card as its strongest, and of late only, form of attack.

For once, PiS may be misreading the public mood, for it does appear that attitudes towards LGBT rights in Poland are shifting. One poll last year found that 56 per cent of Poles were in favour of same-sex civil partnerships, a record high.

If EU money is at stake – and Poland is set to be one of the largest beneficiaries of Covid-19 recovery funding – that shift may quickly become irreversible.

On human rights, Lithuania is failing to make use of the opportunity given to it by being in the EU, claims new report
Magic Monday: Elsewhere in emerging Europe
Comment