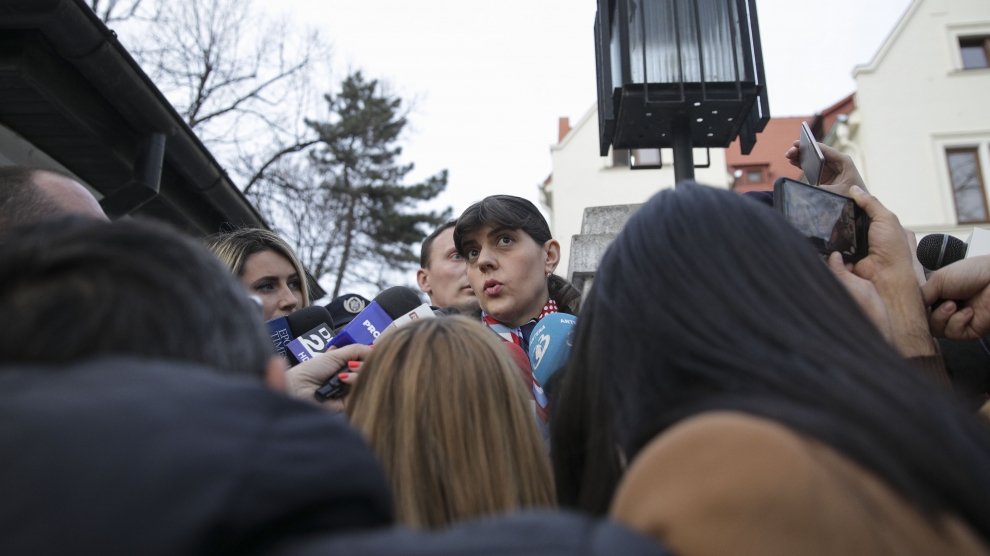 Romania’s justice ministry has opened a new investigation into the conduct of the country’s former anti-corruption chief, Laura Codruța Kövesi.

Ms Kövesi (pictured above, centre) was questioned for more than five hours in Bucharest on March 7, the same day that the European Parliament formally nominated her to become the first head of the newly-created European Public Prosecutor’s Office. The Romanian government opposes Kövesi’s candidacy and has become increasingly desperate in its attempts to prevent her getting the job. Romanian Justice Minister Tudorel Toader this week took the unprecedented step of sending a letter to the Financial Times – which has publicly backed Ms Kövesi – to explain why the government believes she is not fit for the job.

Ms Kövesi was summoned for questioning about the way in which a convicted fraudster, Nicolae Popa, was extradited from Indonesia more than a decade ago, when Kövesi was a state prosecutor. During the interrogation she was informed that a new investigation had been launched to look into accusations that she led an organised crime group while anti-corruption chief. She denies any wrongdoing.

“There is a desperation to stop me in everything I do because of my candidacy for the European prosecutor’s job,” Ms Kövesi told reporters as she emerged from the offices of the Special Section for the Investigation of Crimes Committed by Magistrates. “They summoned me on March 7 knowing that it would be the day the European Parliament would vote on my candidacy.”

The Special Section for the Investigation of Crimes Committed by Magistrates is a highly contentious body that exists outside of Romania’s normal legal structures. It does not report to the country’s independent general prosecutor, but directly to Mr Toader. The Council of Europe’s Venice Commission has called on Romania to disband the unit.

On April 4, a delegation of Romanian prosecutors and judges will travel to Brussels to meet with European Commission Vice-President Frans Timmermans to formally complain about the political pressures being applied to the Romanian justice system. Prosecutors, magistrates and judges across the country have been holding intermittent strikes in protest against political interference for the past two weeks.