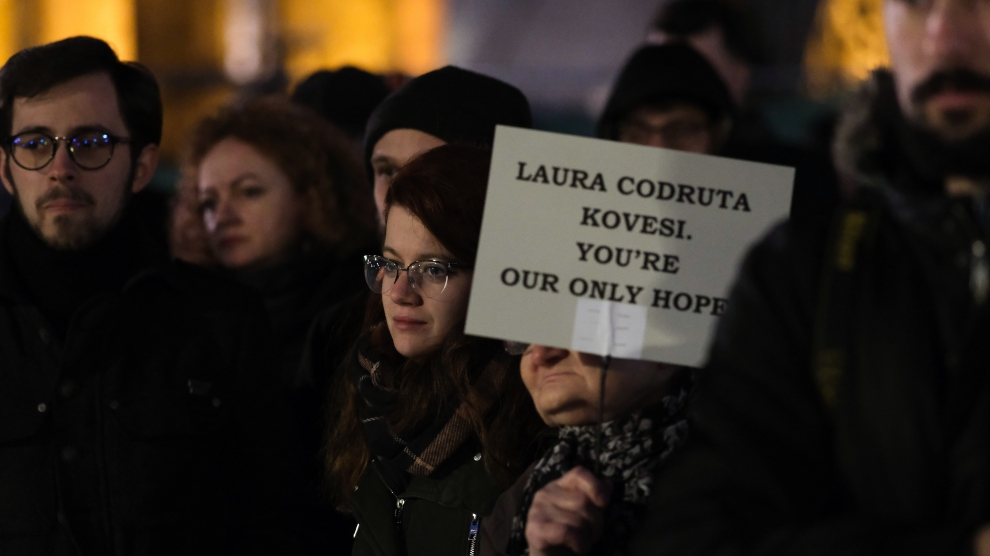 Already under investigation for her role, more than a decade ago, in the extradition from Indonesia of a convicted fraudster, Kövesi was informed on March 7 – during an interrogation lasting more than five hours – that she was also being accused of leading an “organised crime syndicate” while serving as boss of the DNA, Romania’s anti-corruption department.

Specifically, prosecutors at the controversial Special Section for the Investigation of Crimes Committed by Magistrates (which exists outside the jurisdiction of Romania’s independent prosecutor general, answering directly to the country’s justice minister, Tudorel Toader) claim that while head of the DNA Kövesi was complicit in “unjust repression” while investigating alleged cases of corruption.

Kövesi does not believe the date chosen for her interrogation was a coincidence.

“They summoned me on the seventh of March knowing that exactly on that day the European parliament would vote on my candidacy,” she said.

On what was a busy day for all concerned, Mr Toader had a letter published in the Financial Times in which he claimed that Kövesi was not fit for the European prosecutor’s job.

“From all the evidence I have seen – from judges, prosecutors and other credible sources – Ms Kövesi should not be appointed to this vitally important position,” wrote Toader. “She was not dismissed last year because the anti-corruption agency she headed, the DNA, was targeting corrupt politicians. She was dismissed because the DNA was breaking the law. Our Constitutional Court said so. Ms Kövesi’s investigative strategy was based on coercion,” he continued, and there was more:

“After Ms Kövesi’s departure from the DNA, we discovered that, during a four-year period while she was in office, DNA investigations were opened against 3,420 judges and prosecutors – over half the magistrature service in the country. Typically, these investigations remained open and were never brought to trial. They were used to coerce the court system.”

The following day, the DNA published its own letter in the Financial Times (quickly becoming the forum of choice, it would appear, for Romania to wash its dirty laundry) revealing that Mr Toader’s statistics were false.

The newspaper itself has very publicly backed Ms Kövesi to become the EU’s chief prosecutor. On February 28, it published an editorial saying that she was the right person for the job:

“A majority of EU governments, backed by the European parliament’s main political parties, often speak up strongly in defence of judicial independence and the rule of law in their 28-nation club. Now it is time for them to put their words into action. The EU is in the process of appointing the first head of its newly established European Public Prosecutor’s Office. They should choose the person best qualified for the job. She is Laura Codruța Kövesi, a brave and distinguished prosecutor from Romania.”

Brave and distinguished is not the half of it. A woman of substance, Kövesi has with great poise and determination spent the past two years fending off what she has called a campaign of harassment. The new accusations brought against her reveal, she says, “a desperation to stop me in everything I do”.

The Romanian government is unlikely to be successful in its campaign to block her appointment. Backed by most of the EU’s major powers, Kövesi is odds-on to get the chief prosecutor’s job, whose remit will include investigating the misappropriation of EU funds.

Not that she will not be able to do very much in the immediate future. As the head of an entirely new department, Kövesi will initially be tasked with forming a team, designing processes and putting structures into place. She is not likely to be in a position to come after any errant politicians and officials – Romanian or otherwise – anytime soon.

Certainly, Kövesi’s appointment – should it happen – will be viewed by her many supporters as an important victory in the fight against corruption and the national mood in Romania would be lifted. It may even have an impact, albeit small, on the European parliamentary elections to be held in May. Two anti-corruption challenger parties, the Save Romania Union (USR) and PLUS, who are running on a joint ticket and who are both unencumbered by links with Romania’s inglorious past, may in particular see a small swell in support from those who might otherwise not make the effort to go to the polls. The electoral damage to the ruling PSD will be minimal, however.

And yet should the Romanian government succeed in blocking Kövesi’s appointment, its initial elation may be cut short should she decide to launch a bid for the Romanian presidency at the end of the year. Although Kövesi told me in an interview last summer that she had no intention of entering politics, things have changed since then. The Romanian government has forced her out of her job and is actively preventing her from getting a new one. Besides, to become president Kövesi would not have to go into politics. Standing as an independent (although probably backed by the USR and PLUS), the incumbent Klaus Iohannis, an increasingly weak and ineffective bulwark against the government, would be no match for her. As things stand, Iohannis is likely to win a second term comfortably, given that no serious challenger has yet to emerge. Kövesi would be a game changer, and President Kövesi is the PSD’s greatest nightmare.

Which all makes me wonder just why Romania’s government is so keen for her not to get the Brussels job? The answer, in my opinion at least, is simple: the Romanian government simply dislikes what Kövesi represents, something which the writer Mircea Carturescu has called “a better Romania”.

Romania is a country which lacks high profile individuals who can serve as a moral compass. Leading figures in Romanian society, be they politicians, officials, business people, doctors or even journalists are viewed  – in some cases quite unfairly – as inherently corrupt and untrustworthy. Kövesi is one of very few public figures who has managed to rise above such stereotypes. (The current Romanian prosecutor general, Augustin Lazăr, is arguably another). Romanians need an honest, hard-working, competent and – if possible – likeable hero. Kövesi fits the bill on all four counts. As one senior Romanian journalist told me last year, “she’s not perfect, but she’s all we’ve got”.

Unlike many of her critics, I have met Kövesi – in both social and professional settings. On the record she is exactly as you would expect: pertinent, proper and direct. Off the record she is amusing and quite charming.

In a land already far more divided than is healthy, it is perhaps careless to create a new dichotomy, but there is more than a thin red line between those who support Kövesi (and, by extension, the fight against corruption) and those who do not. There is a chasm, a vast abyss between those who would prefer a better, more progressive, modern and honest Romania – the Romania apparently represented by Kövesi – and those who would prefer – often for reasons of personal gain – to return the country to the dark ages.

Laura Codruța Kövesi, who in her role as DNA boss made Romania’s fight against corruption a subject of national importance and had the foresight to see that corruption represents the single biggest threat to the country’s well-being, offers people hope that another, better Romania is possible. That she, and not the government, is viewed by so many Romanians as the country’s moral compass is what really grates.