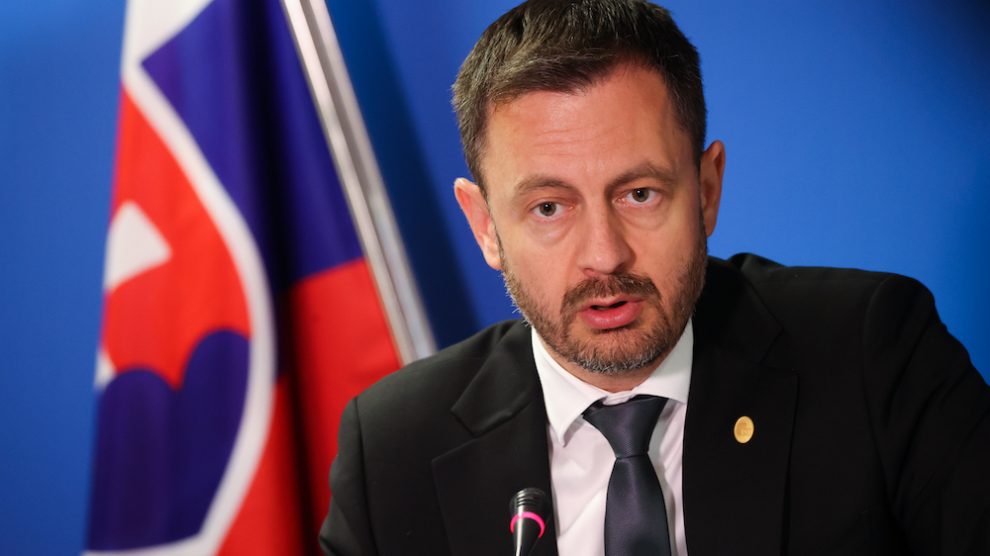 Slovakia’s ruling coalition is once again on the brink of collapse, placing the government’s ability to deal with pressing economic concerns in doubt.

In July, the already fragile coalition of Slovak Prime Minister Eduard Heger came close to collapse when its second largest member, Freedom and Solidarity (SAS), announced it would pull out if the largest party, Ordinary People and Independent Personalities (OĽaNO), did not dismiss the controversial deputy prime minister and minister of finance, Igor Matovič.

“SaS declared earlier in the summer that it will leave the government by the end of August if the minister of finance is not replaced. Everything suggests that this is going to be the case. Without it, it is not yet clear how the government will maintain parliamentary support,” Miroslav Nemčok of the Department of Political Science at the University of Oslo tells Emerging Europe.

According to Martin Vlachynsky of the Bratislava-based INESS (Institute of Economic and Social Studies), Slovakia’s coalition has been on the brink of collapse for quite some time.

“The current turmoil is a culmination of a long-term quarrel inside the coalition, which was united in its opposition to the ex-prime minister [Robert] Fico, but nothing else, especially in term of policies,” he tells Emerging Europe.

Nemčok argues that this lack of political consensus amongst the coalition parties comes down to the fact that the nation’s political figures tend to build up electoral support thanks to a performative style of politics which diminishes wider policy goals and reduces politics into personal clashes.

Prior to the 2020 parliamentary elections, the main political divisions were based on support for, or opposition to, Fico, who served as PM from 2006 to 2010, and again from 2012 to 2018, as well as his party Direction – Slovak Social Democracy (SMET), which became widely associated with corruption.

“Anti-Fico and anti-corruption rhetoric elevated Igor Matovič to power,” Nemčok says. Matovič served as PM from 2020-21 before stepping down to become deputy PM and finance minister.

Matovič resigned as PM after facing criticism from SaS for his decision to purchase Russia’s Sputnik V Covid-19 vaccine.

The economic challenges now facing Slovakia are not much different to those elsewhere in emerging Europe but finding viable solutions will be difficult without a stable government, argues Vlachynsky.

“After having solid economic and employment growth in the past few years, it is now pressed with 13+ per cent inflation, a worsening fiscal situation – despite moderate debt levels, the prospects for the long term sustainability of Slovak public finances are among the worst in the EU – and the looming energy crisis.”

Vlachynsky adds that Slovak households are for now partially shielded from the energy crunch by regulated prices, but many industries are already facing the consequences of skyrocketing prices.

He points to a large aluminium smelter in central Slovakia which recently announced its closure as an example.

“The main reason for the current political situation is the upcoming economic crisis caused by by the rapidly increasing prices of energy,” Juraj Marušiak of the Institute of Political Science at the Slovak Academy of Sciences tells Emerging Europe.

Addressing these pressing issues would be difficult if the government does indeed collapse. One aspect of this is the implementation of the EU Recovery and Resilience Facility which is linked to expected reforms.

“Furthermore, it may jeopardise the energy deal. The ministry of economy, led by Richard Sulík, has prearranged deals with large power and gas suppliers to provide households with below-market priced power and gas,” Vlachynsky explains.

“It will cause trouble in the completion of the 2023 budget, which will be very difficult and painful, as many social groups – healthcare workers, teachers, pensioners – are loudly asking for massive pay rises,” he adds.

More optimistically, he argues that the political crisis is not yet concerning enough to influence the decisions of international investors.

“Both Volvo and Bosch have announced massive investment in Slovakia, with the potential to directly create 6,000 to 7,000 jobs, all in the poorer, eastern part of the country.”

While the immediate future of the incumbent coalition remains uncertain, so do prospects for the formation of a new one.

“If the SaS ministers resign (which is likely), it is possible that the resulting minority cabinet will rely on parliamentary support among far-right parties,” says Nemčok.

He suggests that if the remaining government parties decide to discontinue their cooperation and call a snap election, current polls suggest that one of the major players will once again be the former leading party SMET, which he says is more open to cooperating with the far-right.

“Many likely scenarios for the future of politics in Slovakia include close cooperation with far-right parties, which is disturbing,” he concludes.

On August 31, Heger sought to defuse the row in his cabinet by offering to replace his finance minister if parliament passed measures to protect the public from inflation.

SaS leader Richard Sulik said that he was prepared to discuss the proposal, but only after Matovič leaves office. Sulik also tendered his resignation as economy minister but asked his party’s other ministers to wait until next week.

Photo: Eduard Heger at a meeting of the European Council in June. © European Union.