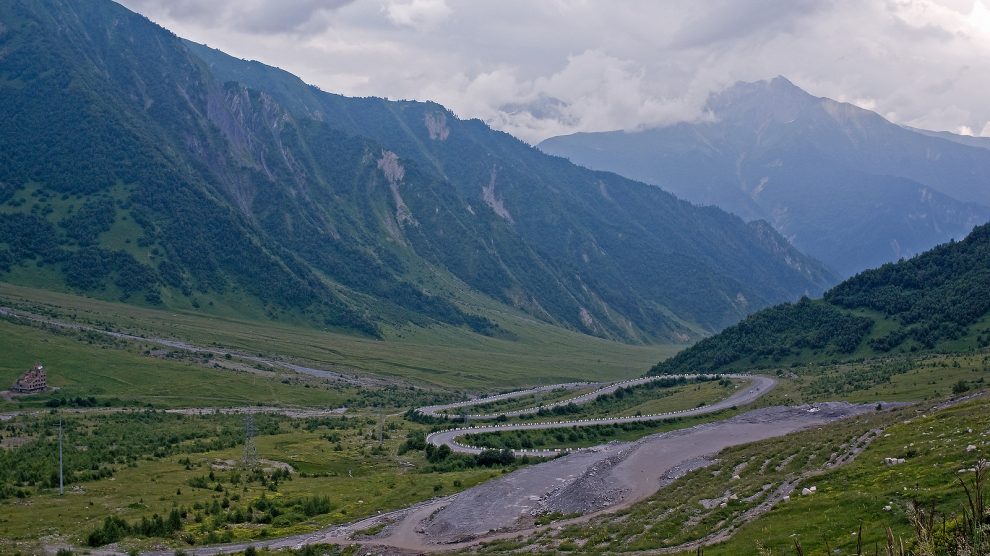 Russia appears to have little appetite for raising the stakes in South Ossetia, a breakaway region of Georgia it recognised as independent in 2008 and which this week said is mulling a referendum on becoming part of Russia.

Moscow has been quick to play down the idea that the Georgian region of South Ossetia might soon vote to become part of the Russian Federation.

While not dismissing the notion out of hand, Kremlin spokesperson Dmitry Peskov told reporters on March 31 that he would not voice an opinion on South Ossetia’s plans to hold a referendum on the matter.

“No legal or any other action has been taken in this respect,” Peskov said. “But at the same time we treat the expression of the opinion of the people of South Ossetia with respect.”

Anatoly Bibilov, the de facto president of South Ossetia, usually referred to in Georgia as the Tskhinvali region, suggested this week that the separatist republic could hold a referendum on joining Russia after a presidential election in the region – which Bibilov is expected to win by a wide margin – on April 10.

“I believe that joining with Russia is our strategic goal, our path, our people’s wish,” said Bibilov. “We will take the relevant legislative steps shortly. The republic of South Ossetia will be part of its historical homeland – Russia.”

Bibilov’s spokesperson Dina Gassiyeva additionally told Russia’s RIA Novosti news agency that the region planned to hold a referendum and the decision was “linked with the window of opportunity that opened in the current situation” – a clear reference to Russia’s invasion of Ukraine.

South Ossetian forces have taken an active part in the invasion, with around 2,000 Russian and local troops based in the territory having been redeployed to Ukraine.

Georgia’s other Russian-backed region, Abkhazia in the northwest of the country, from where Russian troops have also been redeployed to Ukraine, was quick to rule out a similar move. It said that while it supported South Ossetia’s aspirations to become part of Russia, it did not share the same goal.

“Russia is our strategic partner, a dear and close state, but we in [Abkhazia] have no intention of joining the Russian Federation,” Valery Kvarchia, speaker of the region’s breakaway parliament.

Recognised only by Russia

South Ossetia, which has a population of around 50,000, engaged in an armed struggle for secession from 1989 to 1992. As in Abkhazia, the separatists were backed by Russia both politically and militarily.

The conflict remained largely frozen, with South Ossetia de facto independent from Tbilisi, until 2004, when Georgia’s then-president Mikheil Saakashvili vowed to reincorporate all of the country’s separatist territories.

In the coastal region of Adjara, which since the early 1990s had been the personal fiefdom of the staunchly pro-Russian Aslan Abashidze, this was achieved peacefully: Abashidze fled into exile (in Moscow) and Adjara now enjoys a great deal of autonomy and is one of the Georgia’s most prosperous regions.

Later in 2004 fighting broke out between Georgian forces and Ossetian separatists around the town of Tskhinvali, but Saakashvili did not force the issue again until 2008, when increased Russian military activity in the region led to new skirmishes.

In August 2008, Saakashvili ordered a full-scale military offensive which initially took control of significant parts of South Ossetia. Russian then declared war on Georgia, claiming some of its “peacekeepers” in the region had been killed. A brief, full-scale war ensued, in which hundreds were killed and Georgia was heavily defeated: its forces withdrew from South Ossetia (including from areas they had held prior to 2008), and for a brief period Russia occupied the Georgian towns of Gori and Zugdidi.

After a ceasefire ended the war, many ethnic Georgians were forced to flee the region. The territory today remains under Russian occupation and almost entirely dependent on Moscow, which exerts a decisive influence over its politics and governance. While Russia has recognised the independence of both South Ossetia and Abkhazia, only a handful of states have joined it in doing so: most of the world considers both territories to be part of Georgia.

Tbilisi has called the idea of South Ossetia holding a referendum “unacceptable”.

Georgian Foreign Minister David Zalkaliani said that South Ossetia was an “occupied territory” that belongs to Georgia, and that, “any referendum will have no legal force. The European Court of Human Rights has ruled that the Georgian region is occupied by Russia.”

US State Department Spokesperson Ned Price meanwhile said that, “we will not recognise the results of any effort by Russia or its proxies to divide sovereign Georgian territory. We reaffirm our steadfast commitment to Georgia’s sovereignty and territorial integrity within its internationally recognised borders.”

On March 30, Ukraine’s president, Volodymr Zelensky, recalled Kyiv’s ambassador in Tbilisi, suggesting he had not done enough to convince Georgia to punish Russia for its invasion. Ukraine’s ambassador to Morrocco was recalled for similar reasons.

In response, however, Zalkaliani said that Georgia was in “full compliance” with the financial sanctions imposed by the international community against Russia.

“The National Bank of Georgia has already made it clear that Georgia is complying with its obligations and international standards,” he said.

Irakli Kobakhidze, the leader of the ruling Georgian Dream party, said that Ukraine’s recall of its ambassador was “an insult”.

Georgian President Salome Zurabishvili later told CNN that the country was participating in “all kinds” of international financial sanctions.

“At the same time, we are participating in all the international resolutions that have been taken to support Ukraine. We share [with Ukraine] a common two-century history of Russian aggression and we know what that means,” added Zurabishvili.

South Ossetia has previously mulled holding a referendum on its status several times in the past, most recently in 2016. The plan was quietly dropped after failing to receive backing in Moscow.