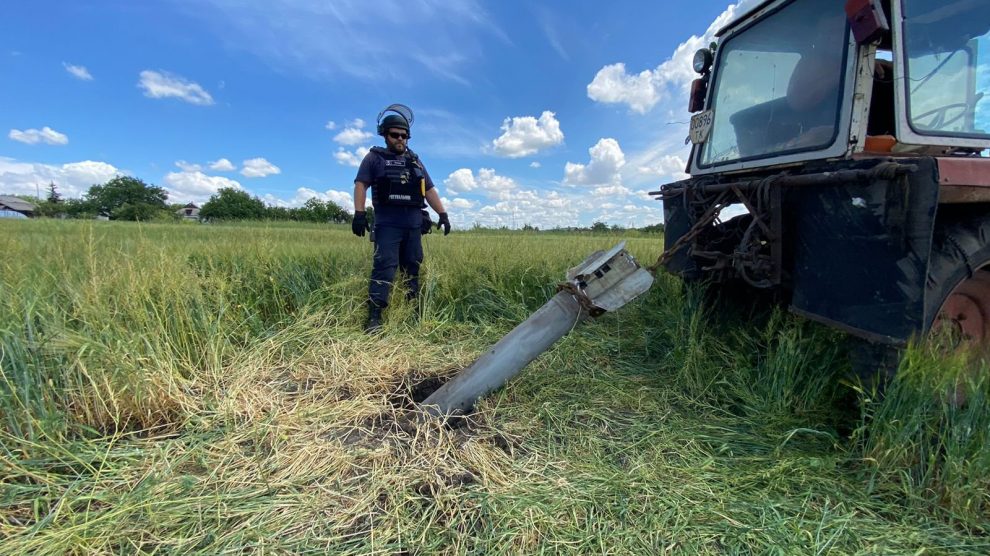 Reconstruction must be an investment in the future, not a return to an unsustainable past, and must recognise the social, cultural and economic importance of Ukrainian ecosystems as foundations for recovery, suggests a major new report.

When Vladimir Putin this week called up 300,000 reservists to fight in Ukraine, it was a clear sign that the Russian president is growing increasingly desperate.

Kyiv’s forces have over the past two weeks won clear victories across the frontline, liberating vast swathes of territory that Russia had occupied for months.

In those areas of Ukraine which remain under occupation, sham, illegal referenda are being held this weekend that will see the counties of Donetsk, Kherson, Luhansk and Zaporizhzhia formally annexed by Russia – likely within days.

Factor in the explicit threats made by both Putin and his de facto deputy Dmitry Medvedev that they are ready to use nuclear weapons to protect the “territorial integrity” of the Russian Federation, and the level of desperation becomes increasingly evident; Russia is losing the war.

Not for the first time, thoughts are now turning to the kind of Ukraine that will emerge when the war is indeed won, and the last Russian soldiers have left the country.

A new report from the World Wildlife Fund (WWF) and the Boston Consulting Group (BCG) suggests that Ukraine needs a sustainable, climate, and nature-positive reconstruction to ensure long-term security.

“Reconstruction must be an investment in the future, not a return to an unsustainable past”, it suggests, “and must recognise the social, cultural and economic importance of Ukrainian ecosystems as foundations for recovery.”

While damage to Ukraine’s infrastructure brought about by Russia’s invasion has been well documented, the scale of the war’s environmental impact has been far less well reported, despite the long-term implications for the Ukrainian people and the economy.

The WWF estimates that more than six million people have no or limited access to clean water, and over 280,000 hectares of forests have been destroyed or felled.

Ukraine will need the largest reconstruction plan in Europe since World War II, and both its government, and likely key donors have already recognised the need to make the environment a priority. All stakeholders present at the first Ukraine Recovery Conference, held in Switzerland in July, were in agreement that sustainability will need to be one of the key principles of recovery.

The WWF-BCG report aims to provide a pathway to achieve these sustainability goals. It shows that, while circumstances are dire, if sustainability is at the core and reforms are properly implemented, this effort could shape a sustainable model of economic development for Ukraine, Europe and the world.

Developed with WWF-Ukraine, who work closely with other social and environmental organisations, academia and businesses, the report aims at bringing a civil society voice into the reconstruction agenda.

“Environmental security must be part of the security paradigm for Ukraine as it provides a basis for Ukraine’s economic development, well-being and survival. It’s about building a more sustainable and resilient country for the people of Ukraine,” says Bohdan Vykhor, the CEO of WWF-Ukraine.

Modernising Ukraine’s economy and infrastructure in a way that works with nature rather than against it would generate many benefits, the report says, including enhanced security with less dependence on imports of fossil fuels and accelerated economic development and job creation.

Such reconstruction can accelerate Ukraine’s integration in the EU and alignment with key policies such as the European Green Deal, to which Ukraine has already committed.

“Even under the most tragic circumstances, there is hope,” says Hubi Meinecke, global leader, climate and sustainability, Boston Consulting Group.

“The extent of suffering and destruction brought by the war is staggering. We know from our engagement with leaders in the Ukraine that they want the international community to start to mobilise now for the recovery. We strongly believe that to achieve the best outcome for Ukrainians, reconstruction should be planned with climate and nature at its heart.”

Invest in the future

Ukraine’s recovery plan should not simply aim to rebuild what has been destroyed, but rather focus on the future: investments must be transformative and sustainable, working with rather than against nature.

Starting with climate change, the plan should ensure that Ukraine can at least deliver on, and potentially raise, its pre-war ambitions to reduce greenhouse gas (GHG) emissions by 65 per cent by 2030 compared with 1990 levels and reach Net Zero by 2060 — all while adapting to a future with growing impacts from climate change.

The natural environment is the foundation of a strong and resilient economy as well as a healthy society. Ecosystem goods and services are valued at 185 billion US dollars per year, which is roughly equivalent to Ukraine’s GDP.

In every sector covered by the report (covering two-thirds of GDP and around 90 per cent of exports), there are opportunities to de-carbonise, reduce resource use and leverage nature-based solutions.

“Having grown up in Croatia, I have experienced firsthand the difficulties and uncertainties of recovery after the Homeland War ended in 1995,” says Tomislav Corak, managing director and partner at BCG.

“Ukrainians will have access to new technologies and can use their digital skills to build people-friendly housing and infrastructure, sustainable agriculture as well as low carbon industrial, transportation and energy solutions. It will take strong leadership and persistence to rebuild Ukraine in an economical and environmentally friendly way. Both are possible, but to deliver them we need to start planning now.”

The report represents an important step forward in efforts to support reconstruction in Ukraine.

It is a basis for engaging with decision-makers inside and outside of Ukraine as well as stakeholders from the private sector, civil society and communities across key sectors for development, but does not, as Bohdan Vykhor admits, offer any definitive answers.

“The war is still ongoing, and the challenges are complex, so this report offers our current perspectives and not definitive answers,” he says.

“We Ukrainians are now paying a very high price fighting for our future. But with leading international partners ready to help Ukraine with their best knowledge and resources, we have a unique opportunity to ensure that the future is not only free, but also better, more sustainable – a thriving environment for people and nature. Ukrainian civil society is ready to contribute fully to this effort.”

Photo: De-mining being carried out in the Donetsk region. © State Emergency Service of Ukraine.