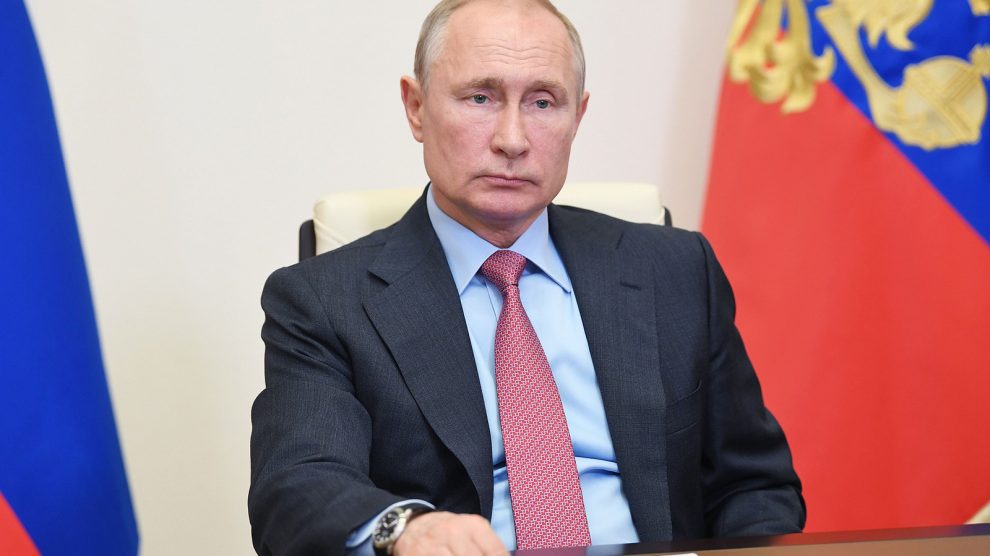 An increasingly desperate Kremlin is about to rebrand its “special military operation” to “de-nazify” Ukraine as a “war of defence”.

Ukraine is about to get much smaller, at least in the mind of Russian dictator Vladimir Putin and his few remaining international allies.

Shortly after voting (if it can be called that) in a series of sham referenda ends on September 27, occupying Russian administrations will announce that residents of four Ukrainian counties (Donetsk, Kherson, Luhansk and Zaporizhzhia) have chosen overwhelmingly to become part of Russia.

They will immediately make a formal request to Moscow to be incorporated into the Russian Federation, likely to be granted within days.

Once formally annexed by the Kremlin, Putin will declare that the four counties are under attack by Ukrainian forces and that Russia’s territorial integrity is threatened. His “special military operation” to “de-nazify” Ukraine will be rebranded as a war of defence. Russia’s borders are likely to be closed, at least to men of fighting age. Partial mobilisation of reservists – announced last week – could be extended further.

Already, Ukraine’s Armed Forces general staff has claimed that some Russian conscripts from the Kremlin’s mass mobilisation are being sent directly to the frontlines without training.

This follows warnings last week from the UK’s Ministry of Defence that many of those conscripted were likely to get little meaningful training – and faced the risk of “high rates of attrition” when deployed.

The US-based Institute for the Study of War was also highly dubious about how the likely effectiveness of the Russian mobilisation, noting that the Kremlin “is unlikely to overcome fundamental structural challenges”.

Any port in a storm

Russian men meanwhile are voting with their feet, forming long queues at the borders of neighbouring countries who will still take them (notably Georgia) and spending fortunes on airline tickets to Turkey, Armenia, and the countries of Central Asia.

Mongolia too has now become a sought-after destination: the AFP news agency has reported long queues at the Russian-Mongolian border.

One estimate suggests that almost 300,000 men have fled Russia since the partial mobilisation was announced, the same number that the mobilisation had aimed to recruit for the armed forces.

On September 26, Putin met with Alexander Lukashenko, the dictator of Belarus and one of his few remaining international allies, in the Black Sea resort town of Sochi.

“Let them go, they have nothing to offer,” Lukashenko told Putin, referring to the exodus of young men.

“We lost thousands, but they will all want to come back eventually. Then you will have to decide what to do with them.”

Belarus is likely to be one of just a handful of countries that will recognise Russia’s annexation of the four Ukrainian counties. Syria and Venezuela will probably follow suit, but that could be it.

Kazakhstan, which as recently as January welcomed Russian forces under the banner of the Moscow-led Collective Security Treaty Organisation (CSTO) to help it deal with civil unrest, has made it clear that it wants nothing to do with the annexation, and will not recognise the results of the referenda.

“Kazakhstan proceeds from the principles of territorial integrity of states, their sovereign equivalence and peaceful coexistence,” said Aibek Smadiyarov, a spokesperson for Kazakhstan’s foreign ministry.

Nor will Serbia recognise Russian annexation of occupied Ukrainian areas. The Serbian foreign minister, Nikola Selaković, said the referenda, “completely contradict our state and national interests, our policy of dealing with territorial integrity, sovereignty and the principle of inviolability of borders”.

Meanwhile, Russia has been warned that the United States and its allies will act “decisively” if Russia uses a tactical nuclear weapon in Ukraine.

US National Security Adviser Jake Sullivan told CBS television at the weekend that: “We have communicated directly, privately and at very high levels to the Kremlin that any use of nuclear weapons will be met with catastrophic consequences for Russia, that the US and our allies will respond decisively, and we have been clear and specific about what that will entail.”

Putin made a thinly veiled threat to use nuclear arms in a speech last week when he announced the partial mobilisation of reservists.

For Ukraine, its goal remains the same: the liberation of all Ukrainian territory.

President Volodymyr Zelensky reiterated his intentions in a televised address on September 25, vowing to liberate the entire country as Russia pressed on with its referenda.

“Our armed forces will throw out Russia’s forces and retaliate against every strike of the aggressor. Every murderer and torturer will be brought to justice,” said Zelensky, adding that two more mass burial sites containing the bodies of hundreds of people have been discovered in the recently liberated town of Izyum.

He also confirmed that Ukraine had received Nasams (national advance surface-to-air missile systems) air defence missiles from the US.