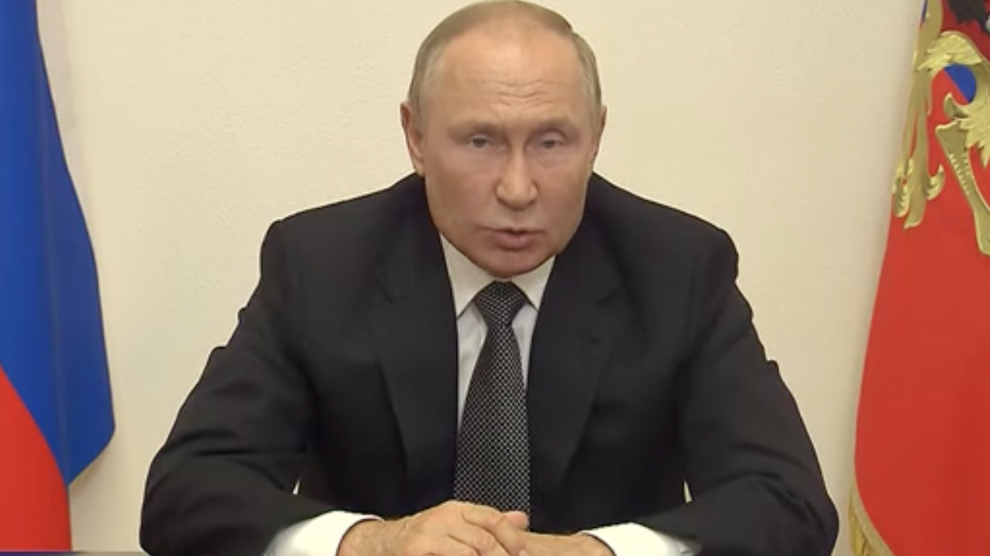 By holding a series of “referenda” in Ukraine’s occupied territories, Vladimir Putin is attempting to repeat the “success” of his annexation of Crimea in 2014.

Russian officials in occupied areas of Ukraine have announced a series of “referenda” on joining Russia, set to take place from September 23-27.

The votes, long mooted, appear to be part of a coordinated strategy designed to offer Moscow an excuse to formally declare war on Ukraine.

Ukraine immediately denounced the planned referenda as “blackmail” motivated by “fear of defeat”.

“Ukraine has every right to liberate its territories and will keep liberating them whatever Russia has to say,” said Foreign Minister Dmytro Kuleba.

US Secretary of State Antony Blinken, speaking on the sidelines of the United Nations General Assembly in New York, said that any Russian sham “referenda” in Ukraine would be “illegitimate and an affront to the principles of sovereignty and territorial integrity that are the foundation of the UN Charter”.

“Such sham votes, referenda, do not have any legitimacy, and therefore they do not change the nature of the conflict,” Stoltenberg said in an interview with Bloomberg Television on the sidelines of the United Nations General Assembly in New York. “This will only further worsen the situation, and therefore we need to provide more support to Ukraine.”

On September 20 Russia’s parliament, the Duma, passed legislation that introduces the terms “conscription” and “martial law” into Russian law, increasing penalties for desertion and surrender, followed the next morning by President Vladimir Putin announcing partial mobilisation in a delayed address on national television.

Putin has until now avoided calling up conscripts, relying instead on professional soldiers and “volunteers”. Up to 300,000 reservists and men with military experience will now, however, be called up.

Putin also gave his backing to the “referenda” in Donetsk, Luhansk, Kherson, and Zaporizhzhia. “Russia will do all it can to ensure safe conditions for the referenda for people to be able to express their will,” he said, adding that, “people in the Donbas are being held hostage by Kyiv”.

“If the territorial integrity of our country is threatened, to defend Russia and our people, we will use all means we have. This is not a bluff,” he added.

“The territorial integrity of our motherland, our independance and freedom will be secured, I repeat, with all the means we have.

“Those who try to blackmail us with nuclear weapons should know that the prevailing winds can turn in their direction.”

Putin has played the “referendum” card before, notably in Crimea in 2014. Then, Russian forces occupied the region and immediately staged a rigged “referendum” in which more than 97 per cent of the population voted for the peninsula to become part of Russia.

The “referendum” was condemned by Ukraine and the international community, which rejected the outcome. Only a few – far from impartial – observers were allowed to monitor the voting process. The Council of Europe, citing the fact that Crimea’s Ukrainian and Tatar populations had largely boycotted the vote, called the 82 per cent turnout and 97 per cent vote in favour of joining Russia “implausible”.

Nevertheless, Moscow used the “referendum” as cover to annex the peninsula: just two days after the vote, Crimea was formally incorporated into the Russian Federation.

A similar scenario is now highly probable in other occupied areas of Ukraine.

By means fair or (more likely) foul, the four counties will vote overwhelmingly for independence or to join Russia. Their remaining populations are made up almost exclusively of ethnic Russians who largely rely on the occupying Russian forces for their livelihoods.

Those Ukrainians still living in the occupied regions will, where possible, boycott the vote, although many could see themselves forced to vote at gunpoint for Russia. Tens of thousands of votes in favour of Russia will meanwhile be stuffed into ballot boxes to ensure Moscow’s victory is as overwhelming as the Crimean referendum of 2014.

In Zaporizhzhia county the occupation authorities have already said that they will go from “door to door” with “election officials” to “collect votes”.

‘An attack on Russian territory’

While a close result would offer more credibility, the Kremlin is no longer interested in appearances. It wants not just to win, but win big. Officials will be under pressure to deliver. Expect turnout in towns and villages run by particularly devout mayors to exceed 100 per cent. Quotas will not just be fulfilled but surpassed.

A formal declaration of war could then follow within days, possibly just hours after the announcement of the “referenda” results.

Dmitri Medvedev, the former Russian president and the vice chairman of Russia’s Security Council, posted on Telegram that the referenda had “huge significance” because the Kremlin would consider an attack on them tantamount to an attack on Russian territory.

“Encroaching on the territory of Russia is a crime, the commission of which allows you to use all the forces of self-defence,” Medvedev wrote.