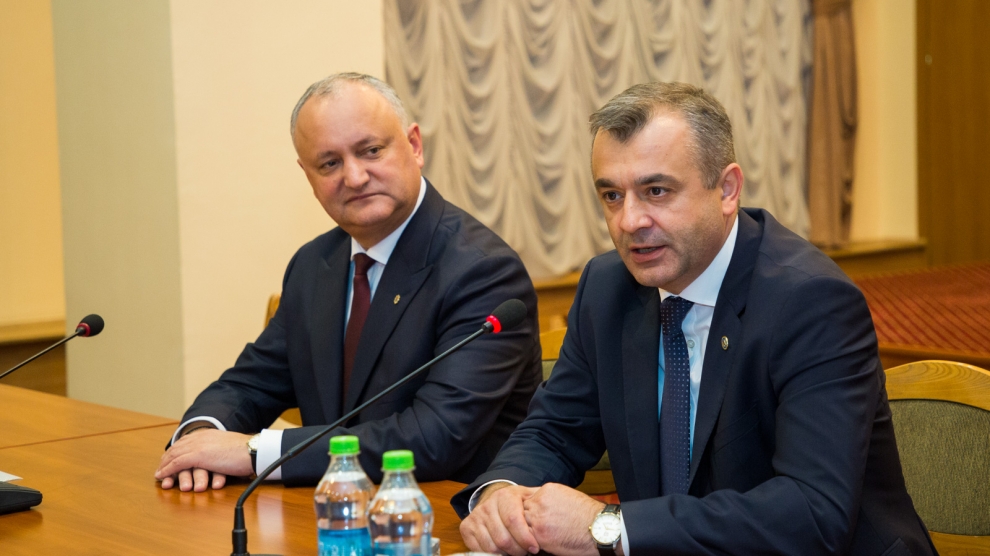 The recent change of government in Moldova has so far proved unable to make real progress, and has pushed the country further towards Russia.

In an unexpected move last June, the PSRM formed an unlikely coalition with the pro-European ACUM bloc to remove Moldova’s third significant political force, the Democratic party, from power. The Democratic party’s leader, Vlad Plahotniuc, had long been viewed as the most powerful oligarch in the country. However, cracks emerged shortly after the government took office and the 2019 October local elections, which left the PSRM and ACUM increasingly at odds, eventually led to its collapse.

“The political drama is over in Moldova. Finally, the essential political institutions – the parliament, the presidency and the government – are working together to advance the public agenda and to deliver what has so often been promised but not realised: an overhaul of how the state understands its responsibility towards the people,” Mr Chicu wrote for Euronews earlier this month, expressing confidence.

After taking office, Mr Chicu, whose mandate runs until Moldova holds a presidential election later this year, promised to lead a technocratic government with a focus on economic and judicial reforms, as well as bringing new investment to the country. The three months which habe now passed, however, have shown that while his government was able to deliver initial economic results, it has put Europe’s poorest economy on a course that is the complete opposite of that which Ms Sandu and her government were working on.

Moving away from Europe and closer to Moscow

While Ms Sandu’s experimental government was greenlighted by both Russia and the West, with the EU hoping for real change, the European bloc has quickly lost patience with Mr Chicu.

Less than two weeks into the job, the Moldovan PM essentially threatened to “pause” an on-going stand-by arrangement the country maintains with the International Monetary Fund (IMF), a three-year programme granting Moldova 182 million US dollars until 2020.

Instead, the government has looked to Russia for loans to finance infrastructure projects over the next two years and is now negotiating a 200-300 million US dollars deal with the Russian government, unquestionably aimed at gaining leverage for talks with the EU.

Breaking ties with the IMF would certainly have been a major blow as the country is looking to attract more foreign investment to sustain a 3-4 per cent GDP growth rate in the coming years. Fortunately, Mr Chicu did not follow through with his threat.

“Against all odds, given the political uncertainty, the current agreement with the International Monetary Fund will be successfully completed by the end of March – proof of the government’s dedication to serious and structural reforms,” Mr Chicu said on February 11, after the Fund finally agreed with his government to approve a further 20 million US dollars as part of its current programme with Moldova.

“This progress is commendable given a volatile political landscape, with the course of the programme stretching over the tenures of three different governments. This has been made possible by broad support for the reforms ultimately aimed at strengthening governance and improving the living standards of Moldova’s people,” IMF mission chief to Moldova Ruben Atoyan said, adding that the Fund’s executive board will make a final call on March 16 and that reform of the country’s public spending continues to be a concern.

Although cooperation with the IMF seems to be back on track – for now – the country’s European integration, which the Sandu government had been desperately working on, has come to halt as Brussels clearly has strong doubts over the new government, despite Mr Chicu’s claim that, “EU integration, despite the less-than-enthusiastic view on enlargement by key member states, is Moldova’s greatest chance to transform its institutions and practices.”

“It’s time for action. It’s a long time we’ve been supportive, we’ve been patient. Now, we will judge the government’s actions objectively,” Luc Pierre Devigne, the deputy managing director for Europe and Central Asia at the European External Action Service has warned. Speaking in Chisinau on February 20, he stressed that the EU had always supported Moldova, but added that Mr Chicu has to step up reforms as support from Brussels is not unconditional.

“Moldova and the EU – as well as Romania and Ukraine – are going through something of a freeze in relations. There are almost no visits by the Moldovan leadership to EU countries except to multi-lateral events and conferences,” he adds.

At the same time, Mr Chicu’s Moldova joined forces with Ukraine and Georgia, two other members of the Eastern Partnership, an EU neighbourhood policy intiative of six post-Soviet countries, to set up the so-called EU+3 format last December for a higher level of sectoral integration in energy, transport and other fields.

Nevertheless, the real level of the country’s – and the government’s – aim to move closer to Europe is perhaps better demonstrated by how much it is willing to commit to European standards such as transparency and the rule of law.

The EU has expressed serious doubts over two main concerns: systemic corruption, which was best demonstrated by the ineffectiveness of the Moldovan authorities to properly investigate a one billion US dollars bank fraud case, and the need for judicial reform. The latter has become particularly stressing since Viorel Morari, Moldova’s top anti-corruption prosecutor, was detained – most likely for political reasons – for investigating the alleged Russian financing of the ruling Socialist party and its head, Mr Dodon.

As the country moves towards its next presidential election on November 8, observers believe that the recent change in government is a preview of what the country would look like should Mr Dodon win a new term in office.

“The only vision this government has is to reelect President Dodon. There is virtually no drive to reduce corruption and pursue justice reform, with a way to make Moldova more attractive for investment,” Mr Popescu continues, stressing that “there is a certain fear that Moldova might backtrack on the democratic front: the EU has been increasingly concerned about the monopolisation of the media market by the governing party, attacks on civil society, and risks that the election campaign later this year might not being entirely free and fair.”

“The basic purpose of Chicu’s government is to do everything to secure a new mandate for Dodon. This government is very dependent on Dodon’s whims, which is best shown in its foreign policy,” Veaceslav Berbeca, an analyst at the Chisinau-based Institute for Development and Social Initiatives told Moldovan daily Ziarul de Gardă, with Teodor Cârnaț, a Moldovan law professor claiming that Mr Chicu has essentially passed the control of the executive branch to the country’s president.

Indeed, the past few months saw Mr Dodon dominating public discussions. Earlier this month he told Euronews that there is no strong Europe without a strong Russian Federation. In reality, however, he and his government is working a political alternative that rather looks to the east in economic terms and aims for limited cooperation with the West: besides aiming to secure favourable gas prices and loans in Moscow while having threatened to cut ties with the IMF, the Dodon-led government has also turned to Turkey to secure investment in infrastructure, such as projects for road modernisation and building new airports in the country.

“Relations with Russia (and Turkey) are good on a political level but for now there seem to be very few concrete benefits from these political exchanges. There is no talk or plans or hope that Russia will abolish entirely the trade restrictions imposed on Moldova in 2014 – when Moldova signed the Association Agreement with the EU – and come back to conducting trade with Moldova under a free trade area regime as before 2014,” Mr Popescu notes.

Recent polls suggest that support for the Moldovan president currently stands at around 42 per cent, with Ms Sandu – who has already run for president once – being the favourite among opposition candidates. However, she has not yet indicated that she is ready for a new bid for the presidency, saying merely that the candidate with the highest chance of defeating Mr Dodon should run.