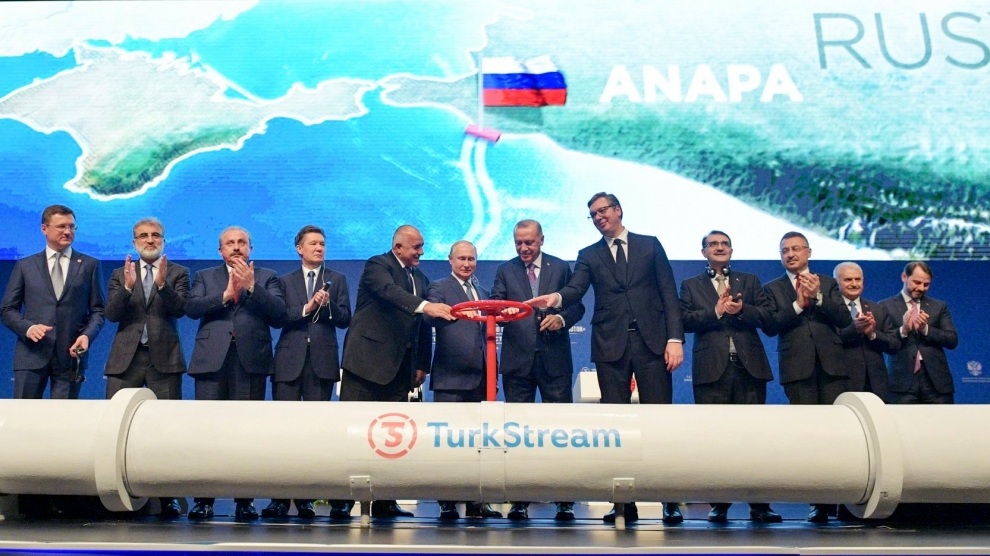 A boost to industry or a threat to energy security? On January 8, the Russian president Vladimir Putin met with his Turkish, Bulgarian and Serbian counterparts in Istanbul to officially inaugurate the new TurkStream gas pipeline. The project significantly changes the landscape of Russian energy supply to Europe, directly connecting Russia to Turkey across the Black Sea, with a second line to deliver gas to Southern and Southeastern Europe, totalling 31.5 billion cubic metres of gas annually.

At the inauguration, Mr Putin boasted that the project’s success is a sign of “interaction and cooperation for the benefit of our people and the people of all Europe, the whole world.” Others share his positive attitude. The Hungarian prime minister Viktor Orbán said late last year, “the sooner we [Hungary] can join, the better”.

However, other players in the region are not as thrilled at the project’s completion. This strengthening of Russia’s gas supply to Europe further contradicts the EU’s push for energy independence: the region still relies on Russia for 40.5 per cent of all its natural gas supplies.

Kostis Geropoulos, The New Europe’s energy and Russian affairs editor, views TurkStream as “the old SouthStream, which has been opposed very strongly by the European Commission because it ran counter to “diversification efforts.” Despite the SouthStream project’s termination in December of 2014, Russia immediately renamed it as TurkStream, following the exact same route, which bypasses Ukraine.

However, due to EU anti-monopoly laws, meaning that an energy supplier cannot own transit infrastructure and sell gas through it simultaneously, much of the project will be carried out by local actors. This ensures compliance with EU laws and legislation, and both EU member states such as Bulgaria, and non-members including Serbia have invested heavily in the project, which took five years to complete, at a cost of 11.4 billion euros.

These countries will also benefit from transit tariffs, with the Serbian president Aleksander Vučić stating that Serbia can expect a return on its investment in the project within 10-12 years. Mr Vučić views TurkStream as a major boost to Serbia’s industry and economy.

However, according to Sergei Kapitonvov, a natural gas analyst at SKOLKOVO, a Russian business school, the Russian-Turkish route the pipeline takes means that Poland and some Baltic states will be deprived of transit tariffs, as the Nord Stream pipelines will lose some of their significance. The new route further allows Russia to deliver gas to Europe while bypassing Ukraine, as bilateral relations between the two countries continue to deteriorate, delivering a heavy blow to Ukraine financially.

While Russia recently agreed not to cease gas transit via Ukraine completely (for now), TurkStream will reduce Ukrainian transit volumes. According to Sergey Makogon, the head of the Gas Transmission System Operator of Ukraine, transit through the country will drop by 15 per cent as a direct result of the new Russian pipeline. As TurkStream was completed, Ukraine halted gas transit towards Bulgaria and Turkey through the Trans-Balkan Pipeline.

The US has also weighed in on the project. Responding to what the it sees as ‘Russian aggression’ the US Senate last month passed a defence bill that imposed sanctions on companies working on both the TurkStream and Nord Stream 2 natural gas pipelines. Those who provide services for the pipeline could have assets frozen.

However, this move has been seen as unwarranted across much of Europe, with the German foreign minister Heiko Maas urging the US not to meddle in European energy policy, labelling it as “a move to influence autonomous decisions that are made in Europe.”

For Russia, natural gas supply to Europe is its trump-card in increasingly hostile diplomatic relations with the West. While the project will have both negative and positive financial impacts in the region, it ultimately drives a firm wedge in the European push for energy security away from Russia. As Mr Kapitonvov told Euronews, “It would be suicide for Russia to shut down gas supply to Europe.”