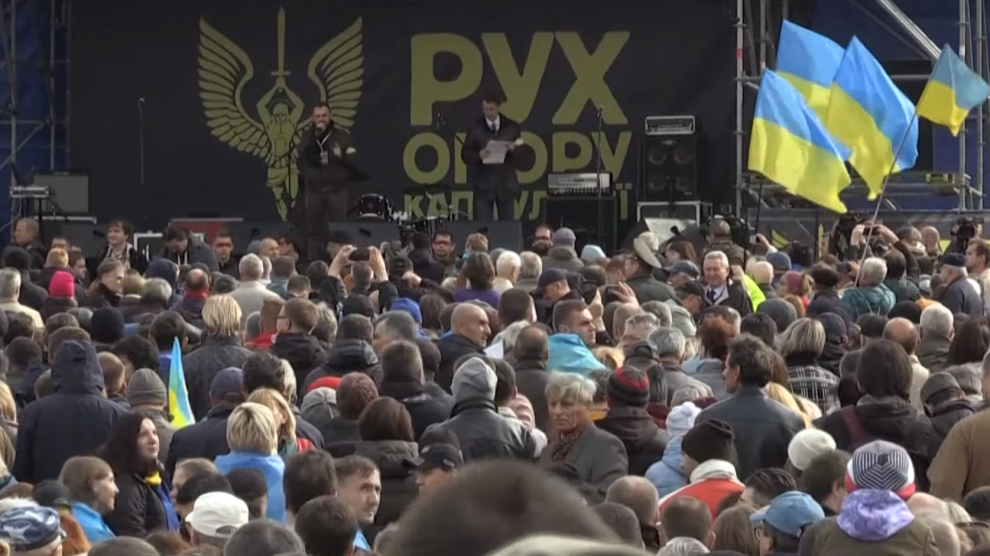 The demonstrators gathered in the city’s iconic Maidan Square, the venue of the 2014 revolution that swept Viktor Yanukovich, Ukraine’s former pro-Russian president, from power, calling Mr Zelensky’s plan a “capitulation to Russia.”

RBC Ukraine reported that similar protests had taken place in at least 20 Ukrainian cities, including Lviv, Kharkiv, Mariupol, Odessa and Poltava. Among the demonstrators were several nationalist organisations.

According to the Ukrainian edition of RFE/RL, the protesters demanded an extraordinary regional council session in Kharkiv to launch a formal complaint against giving the self-proclaimed Donetsk and Luhansk People’s Republics (DNR and LNR) special status and removing Ukrainian troops from the frontline.

At the centre of the protest is the so-called Steinmeier formula, a conflict settlement proposal by former German foreign minister Frank-Walter Steinmeier which would grant Donbas with permanent special status if local elections are held in the Donetsk and Luhansk regions under Ukrainian law and if the Organisation for Security and Cooperation in Europe (OSCE) declares that the votes are conducted in accordance with international standards.

On October 2, a roadmap, which was a precondition of the Russian government attending the next round of Normandy talks between France, Germany, Russia and Ukraine, was endorsed by the Ukrainian president. The summit is expected to take place later this month.

While Mr Zelensky viewed the roadmap’s inclusion in the peace settlement as a necessary step, critics say it will leave Donbas under heavy Russian influence.

The Ukrainan president insisted that the withdrawal of Russian troops from Donbas was also a key condition to resolve the crisis, but the issue has yet to be discussed.