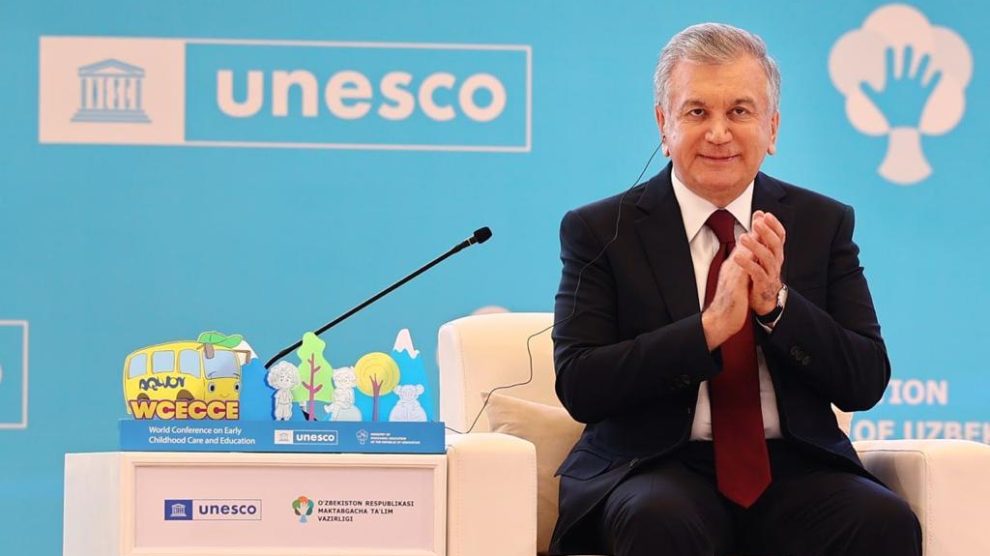 Aqlvoy, a kindergarten on wheels, is a fleet of bright yellow buses that visit hard-to-reach villages in rural areas of Uzbekistan three times a week. The Aqlvoy buses offer pre-school education to thousands of Uzbek children who would otherwise have to do without, at a fraction of the cost of building and operating kindergartens in remote villages.

The Aqlvoy programme is part of a wider Uzbek campaign to get at least 80 per cent of its youngest children into free pre-school by 2026. It is run by the country’s Ministry of Pre-School Education, created in 2017 when it was broken off from the general Education Ministry, which, says, Agrippina Shin, the pre-school minister, “was not able to focus on the needs of pre-school age children”.

Shin points to the success of her ministry in the five years if its existence: from a pre-school enrollment rate of 27 per cent in 2017, almost 70 per cent of Uzbek children are now enrolled in some form of pre-school programme.

Uzbekistan currently commits four per cent of GDP to education, something that Shin says is not an expense, but an investment.

“We are working hard to build a new Uzbekistan and the development of human capital is a priority,” she says. “Sustainable development goes out of the window if the youngest generation is not educated.”

Uzbekistan’s recent success at overhauling its pre-school education system made it the ideal host for a recent UNESCO conference devoted to early childhood care and education, which brought 1,500 people from more than 150 UN member states to the Uzbek capital Tashkent.

Over several days, ministers, policy makers, teachers, education experts and child psychologists debated the way forward while hearing about various examples of best practice in the field of pre-school education – many of which were devoted to ensuring pre-school care and education in times of crisis.

One of these was the Spynka programme, run by the Comenius Foundation for Child Development in Poland, which offers pre-school care and education for Ukrainian refugee children while also helping their mothers integrate into Polish society, including training them to be pre-school teachers.

“We knew that Ukrainian mothers bringing their children to Poland would need childcare, and we knew that the children would need pre-school. That’s why we came up with Spynka,” says Ada Milewska, the programme’s coordinator.

“Our goal for the future is not only to train educators who work in our centres, but who will be able to go back to their own countries and create a similar programme there. We want to make Spynka a long-term solution for early childhood education.”

According to Uzbekistan’s president, Shavkat Mirziyoyev (pictured above), who since taking office in 2016 has pursued an ambitious programme of reform, “where there is education and training, there will undoubtedly be science, culture and development”.

He told the UNESCO conference that “radicalism and extremism will never take root in a highly educated society,” adding that he wanted Tashkent to become a regional UNESCO centre, coordinating the agency’s efforts to achieve its sustainable development goals in Central Asia.

Uzbekistan has certainly in recent weeks become a hub of international activity. Besides the UNESCO event it has hosted a key regional investment conference, a meeting of heads of state and government of the Turkic states, and last week an EU-Central Asia connectivity conference that brought the EU’s foreign policy chief Josep Borrell to the Silk Road city of Samarkand.

Borrell was in town to sell the EU’s Global Gateway, its strategy to boost smart, clean and secure links in digital, energy and transport sectors and to strengthen health, education and research systems across the world.

Mirziyoyev, addressing the EU-Central Asia event, appeared to be receptive, saying that diversification of transport routes was an urgent task for all countries in region, “the implementation of which will open access to world markets, active participation in the processes of global integration and cooperation”.

“We are sure that a number of initiatives of the European Union in this direction will serve to create the most optimal and efficient transit and logistics infrastructure,” he added.

Back at the UNESCO World Conference on Early Childhood Care and Education, the Tashkent Declaration, adopted by more than 150 UN member states, is intended to set the international agenda for early childhood education through the year 2030.

“Investing in early childhood is crucial to reduce social inequalities, which begin even before birth,” says Audrey Azoulay, UNESCO’s director-general.

“For a long time, early childhood has been a blind spot in public policy. Increasing funding, both national and international, will make a difference for future generations.”

Uzbekistan, with its fleet of yellow buses ensuring that as many children as possible are given the opportunity to attend kindergarten, appears to have grasped that message better than many other countries.