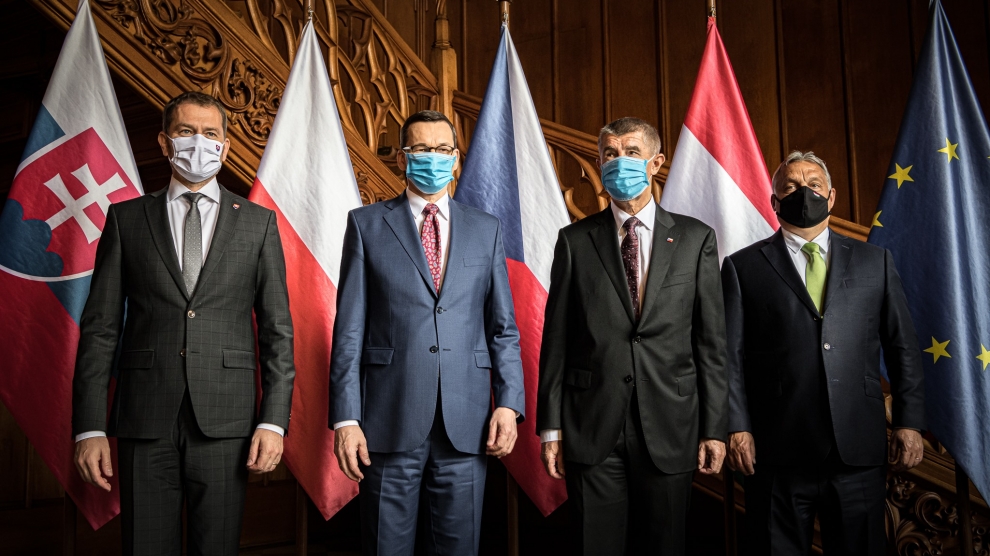 Wearing face masks and gloves, the Czech, Hungarian, Polish and Slovak prime ministers have called on the European Union to ensure that its Covid-19 recovery fund, known as Next Generation EU, is distributed “fairly”.

Unveiled by Brussels last month, the recovery package has been criticised by fiscally conservative members of the EU, including a number of countries in emerging Europe.

The four Visegrád Group (V4) prime ministers, however, failed to agree a common stance on the distribution of the recovery fund, worth 750 billion euros.

“We want to send a signal together… that we should be fair,” Slovak Prime Minister Igor Matovič told reporters after the meeting of the V4 leaders at Lednice Castle in Czechia, one of the first major summits to held anywhere in the world since the beginning of the Covid-19 pandemic.

“I think the main criterion should be the GDP slump of each member state, and that must be assessed early next year,” added Czech Prime Minister Andrej Babiš.

Hungarian PM Viktor Orbán agreed, saying that the fund was “philosophically quite far from what the Hungarians think about the world,” pointing to what he perceives as the fund as being a way of creating a more deeply integrated Union.

Mr Orbán did admit, however, that the fund was an “exceptional solution in an exceptional situation.”

“We are willing to accept it, because we feel positive about the initiative, but it still needs to be worked upon,” Orbán added.

Poland’s Prime Minister Mateusz Morawiecki said after the summit that wealthier EU countries should pay more into the bloc’s EU budget in the wake of the coronavirus economic recovery.

“Poland is strongly pushing for this, that the sources of additional payments have to be fair, one can even say progressive. The countries that are richer need to pay more,” Mr Morawiecki told reporters. “There should be no rebates in the EU budget for those countries who are richer.”

Poland is set to be one of the largest recipients of the recovery funds, and is in line to receive 64.5 billion euros, the fourth largest amount in the entire European Union, behind only Italy (153 billion euros), Spain (149.3 billion euros) and France (78 billion euros).

With the exception of Poland, which has recently seen a new spike in Covid-19 cases in the country’s coal-mining areas, the V4 countries have fared well in the battle against the virus, having imposed lockdown restrictions early.

Magic Monday: Elsewhere in emerging Europe
Self-driving shuttle buses are about to become a part of daily life on the streets of Tallinn
Comment