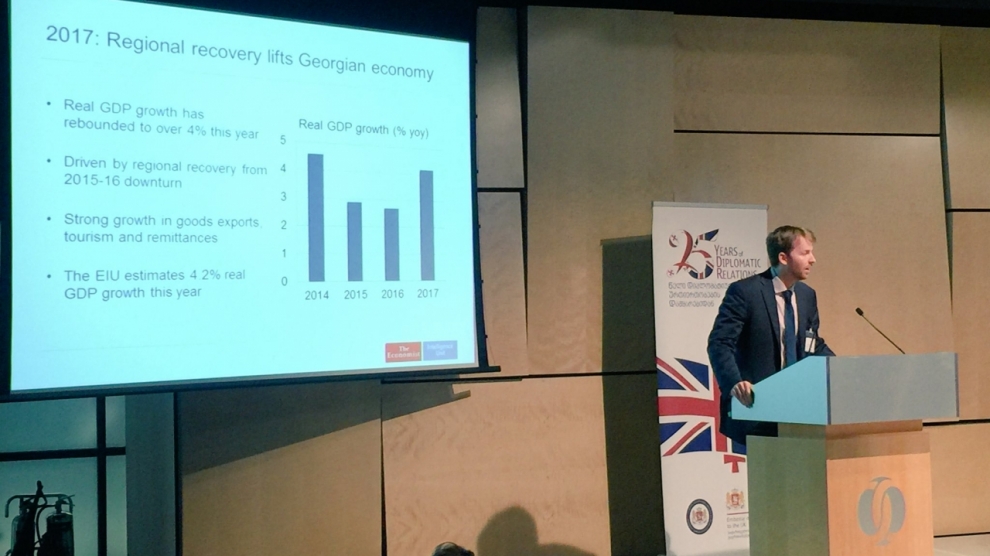 More than 150 politicians, business leaders, analysts, journalists, bankers, investors and people who simply have an interest in Georgia were brought together on November 20 at the Emerging Europe-EBRD Outlook on Georgia.

Held at the EBRD’s London headquarters, the event provided all Georgian stakeholders the chance to get up to speed with the latest developments and opportunities in what is one of the region’s most dynamic economies.

“What has impressed me today the most is seeing how many Georgians in important positions — ministers, CEOs, bankers — are young, passionate, creative and cool,” said Bruno Balvanera, the EBRD’s director for the Caucasus.

“Georgia is a business-oriented country,” said Giorgi Cherkezishvili, the Georgian deputy minister of the economy during his keynote address. “It is the best investment destination in the region, a transparent, corruption-free and stable country with a very low crime rate.” The minister then outlined Georgia’s highly attractive tax regime.

“Georgia is the 9th least taxed country in the world,” he said. “There is no payroll or labour tax, and no social contributions, just income tax at 20 per cent. Companies only pay tax on profits when dividends are issued, any profit which stays in the company goes untaxed. In all, we now have just six taxes. Ten years ago there were hundreds.”

“We see growth of the Georgian economy this year at 4.2 per cent, although new figures out this morning mean we may have to revise that upwards,” said Maximilien Lambertson from the Economist Intelligence Unit, who went on to identify agricultural, hydropower, tourism and transport as the most promising areas for further growth.

“However, the constitutional ban on sales of agricultural land to foreigners is a concern,” said “Mr Lambertson. “The government has a dispensation to make exceptions, but that is not wholly transparent. Georgia also needs to fill its skills gaps.”

“Overall the outlook for Georgia is more positive than it has been,” concluded Mr Lambertson. “Given how far country has come, I look forward to seeing what it can do over the next five years.”