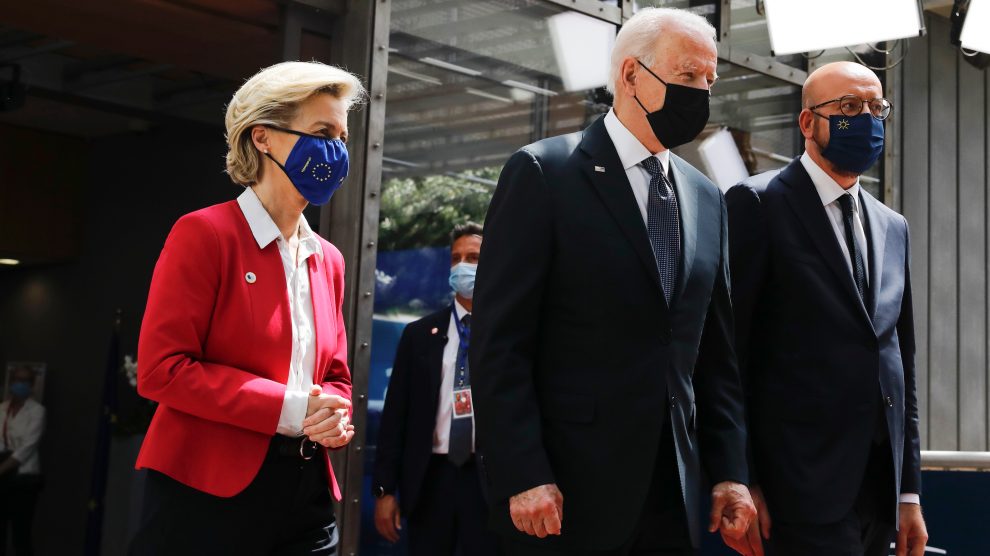 For Joe Biden’s Summit for Democracy to succeed, the US must work closely with NATO and the EU to take concrete measures to stop the erosion of democracies from within.

The Summit for Democracy that US President Joe Biden is spearheading in December, at which scores of countries will be in in attendance, is certainly timely and necessary.

I do not expect revolutionary and immediate measures to be adopted at the summit to save democracies from their rapid erosion in so many countries. The fact, however, that such a summit is taking place at this particular juncture is extremely important.

Democracies around the world are facing great challenges and are in retreat. Authoritarian leaders are exploiting the frustration and the deep polarisation of their populace where democracy failed to deliver. Even America’s 240-year-old democracy was under ominous assault on January 6, which demonstrates how fragile democracy can be and how difficult is to sustain it, given the insatiable thirst for power by authoritarian-minded leaders.

Regardless of how many good ideas emerge from the democracy summit, there are three other issues the summit must address: first, organisations such as the EU and NATO, which are based on the principles of democracy, freedom, and human rights, should not allow member states such as Poland, Hungary, and Turkey to violate their charters with impunity. Second, the US must end the practice of forcing democracy down the throats of any country. Third, the US and the EU must lead by example and encourage other countries to emulate them and provide them with incentives to adopt democratic principles.

The EU has in fact been struggling with Poland and Hungary, whose leaders became notorious abusers of human rights and openly defy and undermine the EU’s legal structure which is based on human rights and the rule of law.

In Poland, the Constitutional Court ruled that Polish laws has primacy in some areas, which is a direct challenge to the EU as all its members must treat EU laws as supreme.

Ursula von der Leyen, head of the European Commission, told the European Parliament that: “This ruling calls into question the foundations of the European Union. It is a direct challenge to the unity of the European legal order…[and] has serious consequences for the Polish people…without independent courts, people have less protection and consequently their rights are at stake.”

Indeed, Poland continues to severely violate human rights, limiting the independence of the media and egregiously infringing on the rights of women, LGBTQ+, and immigrants.

Hungary’s President Viktor Orbán, who is clearly charting his own new course toward illiberal Christian democracy, came out in support of Poland’s rejection of EU supremacy. He stated that the EU must “respect member states’ sovereignty,” as if domestic human right abuses have nothing to do with the EU’s charter, which views universal human rights as the crown jewel of the Union. Hungary, like Poland, does not fall short in its abuse of human rights, harassment of liberal organisations, rejection of migrants, and outright discrimination against minorities while centralising power and control in the hands of the ruling conservative party.

At a time when the struggle between authoritarianism and democracy is so intense, if not fateful for the future of democracies, NATO and the EU must warn these countries that they are on the precipice of being kicked out if they do not change their governing practice. They must be required to restore the principles of democracy by upholding universal human rights and abiding the rule of law, or else they will forfeit their membership and suffer from the consequences of their crimes.

Turkey as a NATO member state under President Recep Tayyip Erdoğan has crossed every red line in its treatment of its citizens and relations to NATO. Erdogan’s human rights abuses go beyond the pale of moral bankruptcy.

Since the presumed failed coup in July 2016, Erdoğan has gone on a rampage against his own people, incarcerating tens of thousands of innocent individuals, including women with their children, shutting down the free press, subjecting his critics to criminal indictment, waging a merciless war against his own Kurdish community, and making the parliament nothing but a rubber stamp. Indeed, nothing is left of Turkish democracy.

All the while, he continues with his Islamisation campaign, thinking of himself as God sent to restore the “glory” of the Ottoman Empire.

On foreign policy, it suffices to quote former Turkish Foreign Minister Yaşar Yakış, who said: “Erdoğan has long lost the trust of Europeans. There is no shortage of subjects of tension between the EU and Turkey, such as the question of refugees, the future of Cyprus…the exploitation of hydrocarbons in the Eastern Mediterranean where Turkey is in competition with Greece, Syria and Israel.” In addition, Erdogan’s coziness to the West’s foremost adversary, Russia’s Putin, and his purchase of the S-400 air defence system which compromises NATO’s defences and intelligence, raises major concerns among NATO member states.

The Summit for Democracy should also remind the US in particular that it is time to cease and desist any effort to export the US’ form of democracy to foreign countries through the use of force; Vietnam, Iraq, Afghanistan, and Libya offer perfect examples of America’s failures.

The US should show in words and in deeds why democracy is the best form of government that delivers for the people, protects human rights with zeal, and indiscriminately provides the opportunity for every individual to grow and prosper by working hard and adhering to the rule of law.

During deliberations at the summit, Biden should admit to the US’ past mistakes and send a clear message to the whole world that the US stands ready to aid any country whose people are yearning for freedom and democracy and offer to provide economic and technical assistance as long as their leaders fully adhere to universal human rights, the rule of law, and governing with the consent of the people.

This applies to US allies as well. The US should not ignore the fact that many of them, especially in the Gulf, are autocratic. In these instances, the US should use its soft power to entice them to open their societies.

It is hard to exaggerate the importance of leading by example and demonstrating how democracy functions and why it requires constant nurturing. The January 6 insurrection demonstrated in no uncertain terms how democracy can be ominously undermined when the country’s elected leaders are authoritarian by their very nature. A narcissistic leader, such as Donald Trump, whose hunger for power seems to know no limit, has happily sacrificed the good of the country on the altar of his twisted ego.

America’s democracy cannot be repaired unless he and those who helped him are held accountable and face the weight of the law. Yes, America still can lead by example, but the Biden administration must simultaneously and systematically attend to healing the country of the terrible wounds inflicted on America’s democracy so brazenly by the previous administration.

For the Summit for Democracy to succeed, the US must work closely with NATO and the EU to take concrete measures to stop the erosion of democracies first from within. Otherwise, it will be difficult, if not impossible, for the US and the EU to help repairing ailing democracies outside their own orbits. Leading by example and demonstrating that democracy can deliver to the people should become the hallmark of the Summit for Democracy.

The platform economy is a broad church. Legislation should embrace it
After COP26, regional collaboration will continue to drive bold climate change action
Comment