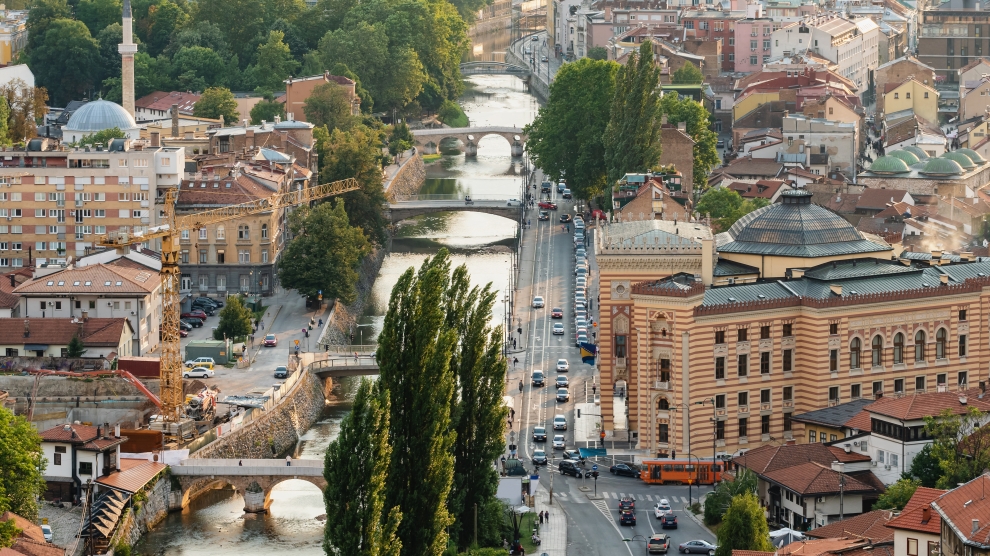 Deutsche Welle recently published a comment on Bosnia and Herzegovina written by Stefan Schwarz, a renowned German politician. In the text, the author advocates a revision of the German policy towards Bosnia, proposing a change of the country’s constitution, which needs to be jointly supported by Germany and the US.

According to Schwarz, the current Bosnian constitution, imposed on the Bosnians by the American ‘peacemaker’ Richard Holbrooke in 1995, amputated the country’s territory and destroyed its soul. The Dayton operation formally saved the state of Bosnia and Herzegovina, but has dimantled its vital functions.

Moreover, it has rewarded the convicted war criminals with huge parts of its territory, which is now controlled by these corrupt oligarchies as their private property, absolutely guaranteed by the international contract signed in Dayton. Therefore, says Schwarz, the German chancellor, Angela Merkel, commonly considered the most powerful woman in the world, has a great responsibility to use her power to press for a constitutional order that would make Bosnia compatible with other European countries.

A systematic dissolution, from Lisbon to Dayton

It is difficult not to agree with Mr Schwartz in his diagnosis of Bosnia’s problems. It is also difficult not to agree about the need for constitutional changes, although the author does not go into specifics. Simply, there is no doubt that the current constitution must be changed if the state of Bosnia and Herzegovina is ever going to start functioning. For, the Bosnian state institutions are, first and foremost, blocked by the existing constitutional structure, and only then by the will of the local ethno-nationalist leaders, who only take advantage of it.

Yet, the point at which we, as Bosnians who remember the country’s recent past, have to disagree with Mr Schwarz is the thesis that Bosnia’s ethnic partition was simply a result of the US-sponsored Dayton Peace Agreement.

Dayton was only the concluding part in the process of systematic dissolution of the country’s sovereignty, launched and sponsored by the European Union and the United Nations, and carried out by their nominated representatives, Lord Carrington, Jose Cutileiro, Cyrus Vance, Lord Owen, Thorvald Stoltenberg. This process began at the Lisbon Conference, in February 1992, several months before the outbreak of the war, and resulted with the Carrington-Cutileiro Plan, the first internationally-sponsored plan for the ethnic partition of Bosnia.

The very existence of this pre-war plan shows that ethnic partition was not proposed as a provisional solution for the ongoing war, as has been repeated many times ever since, including the comment by Mr Schwarz. Rather, the war itself, with ethnic cleansing as a tool in the creation of ethnically homogenous territories out of the single territory of Bosnia and Herzegovina, served as an instrument in the physical implementation of the concept of ethnic partition.

This concept was first prescribed by Carrington and Cutileiro in 1992, and then adopted in all subsequent ‘peace plans’: the Vance-Owen Plan in 1992, the Owen-Stoltenberg Plan in 1993, the Washington Agreement in 1994, the Contact Group Plan in 1994, and the Dayton Agreement in 1995. Interestingly, the only concept that has been on the table in all these plans was the concept of Bosnia’s ethnic partition. No EU, UN, American or Contact Group initiatives have ever tried to consider any other option: Bosnia and Herzegovina’s ethnic partition has always been a must. Even those rare individuals who attempted to challenge the concept itself have even more rarely noticed that it had had a history that did not start in Dayton and that no alternative solution has ever been proposed. Therefore, ethnic partition of Bosnia-Herzegovina was not a clumsy mistake made by Holbrooke and the Americans in Dayton; it has been a strategy adopted by the UN, the EU, and all relevant global powers, a strategy that has not been abandoned to the present day.

A division of non-divisible, a transfer of non-transferable

This prolonged international consensus about the concept of Bosnia’s ethnic partition craves for identification of its authors and explanation of its broad acceptance among the most relevant global powers (which includes not only the EU and the UN, but also all individual members of the Contact Group: United States, United Kingdom, France, Germany, Italy, and Russia).

However, let us first take a look at the concept from a theoretical point of view. Political and constitutional theory claims that sovereignty is, above all, non-divisible and non-transferable. What was being proposed as a ‘solution’ for Bosnia and Herzegovina, from Lisbon to Dayton, was exactly the opposite: a division of the state’s sovereignty, with a transfer of sovereignty to its three ethno-religious groups, so as to assign them parts of its territory over which they would gain sovereign control. Under these conditions, these groups have been labelled as ‘constituent peoples’ – a category otherwise non-existent in political and constitutional theory – as if they posses the primary sovereignty and thereby constitute the state of Bosnia-Herzegovina, whose sovereignty is a secondary one, derived from theirs and divided by implication.

According to the Dayton Constitution, even the last remnants of Bosnia’s divided sovereignty have eventually been transferred to the so-called Office of the High Representative, so that the High Representative has remained the only level at which sovereign decisions can be made. At all other levels, including the level of the state of Bosnia and Herzegovina, all decisions can be blocked by leaders of the three ethno-religious groups, which practically makes these leaders sovereign.

Yet, the current High Representative has abandoned even these, very limited constitutional powers, so that in reality no sovereign decisions can be made above the level of ethno-religious leaders. In other words, as noticed by Mr Schwarz, it is not their irrational nationalism that creates their blockages on the level of the state; it is the constitutional structure which deprives the state of its sovereignty.

Yet, who was powerful enough to reverse the universally valid constitutional principles, and why has this reversal been applied to Bosnia and Herzegovina, of all the countries in the world? After all, why this has encountered such approval by the most powerful global structures, such as the EU and the UN, as well as the most relevant individual powers, although the principles applied to Bosnia and Herzegovina are exactly the opposite from the principles upon which they are all built?

Given the presence of British diplomats in all ‘mediating’ combinations before and during the war in Bosnia, and given the fact that the concept of ethno-religious partition is a concept the British diplomacy had previously applied in the process of decolonisation of India, with the consequent creation of India and Pakistan (including the secession of Bangladesh), and also in Palestine and Cyprus, one may only speculate why the British Foreign Office put the ethnic partition of Bosnia-Herzegovina among its geopolitical priorities.

In a broader perspective, it is certain that such partitions have never produced any degree of stability, as its advocates tend to claim; quite the contrary, all these parts of the world have become permanently unstable after application of the British ‘solution’ in the form of their ethnic or ethno-religious partition. Whether permanent instability along or around particular geopolitical points is one of the pillars of British geopolitics or not, remains to be more broadly explained by its historians; this is not a proper place for that.

However, a more fundamental question is, why such a ‘solution’ applied to Bosnia has been acceptable to so many relevant global players, including the US, Germany and the entire EU? Probably we can never reach a clear and comprehensive answer to this question, either. However, in this very context, a clear response is required to Chancellor Merkel’s recent claim that “Bosnia needs more empathy“: Bosnia does not need any degree of empathy – empathy is to be offered to the powerless. What Bosnia needs is that the global powers simply cease with application of double standards, and start applying to Bosnia the same principles, concepts and values they apply to themselves. Above all, that these powers give Bosnia back its innate right to sovereignty.

Dr Zlatko Hadžidedić is the founder and director of the Center for Nationalism Studies in Sarajevo, Bosnia and Herzegovina.

No ceasefire in sight as Armenia and Azerbaijan once again fight over Nagorno-Karabakh
Protests in Bulgaria: Another troubled EU country
Comment