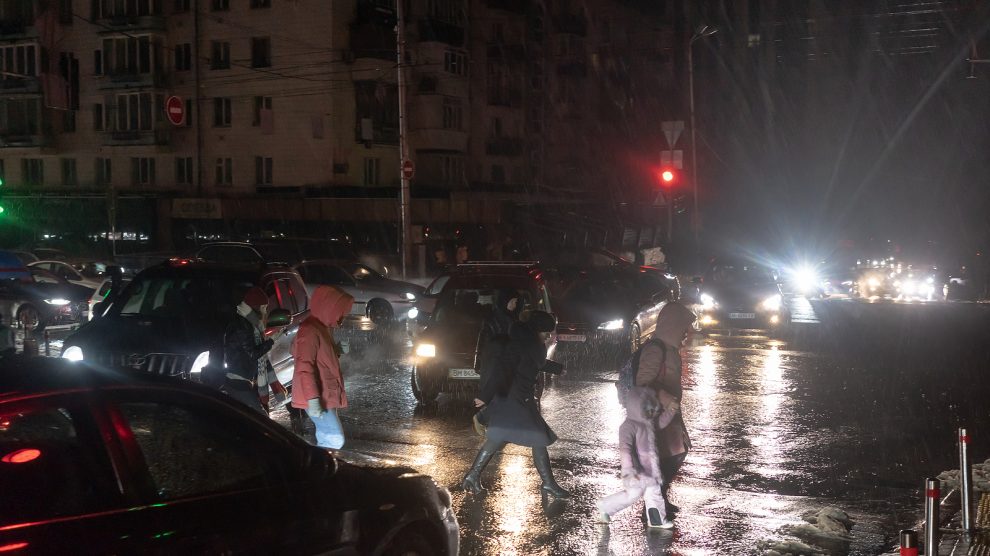 Blackouts across Ukraine have meant that ordinary people have had to take extraordinary measures in order to continue living ordinary lives.

Russia’s massive shelling of Ukraine’s energy sector has caused the largest blackouts in the country’s history. After every Russian attack, emergency power outages immediately occur throughout the country, plunging large areas into darkness.

Even if the system can partially be restored, power cuts are introduced for hours or even days, owing to the a shortage of energy resources. In some regions, the electricity deficit can exceed 50-70 per cent. Such lengthy blackouts could not help but affect the daily routine of Ukrainians, as people are forced to live without electricity in sub-zero temperatures.

So, how have the massive blackouts affected Ukrainian society?

Power outages affect not only home or work life but also the level of security on the street. The lack of lighting in cities has worsening road safety as many busy roads and important intersections are left without traffic lights and street lighting.

According to Andriy Molokoedov, the spokesperson of the Patrol Police in Kyiv, since October 10 (when the power cuts were first introduced), the number of traffic accidents has increased by 55 per cent. He adds that more pedestrians became involved in accidents, and the death rate of those who got into accidents increased sixfold.

In order to reduce the appalling growth of accidents and of pedestrians dying from them, the authorities launched an information campaign advising pedestrians how to be more visible to drivers: it is better, for example, to wear light-coloured clothes with reflective elements. While drivers will see pedestrians in the dark just 30 per cent of the time, If clothes with reflectors are worn, the percentage rises to 80 per cent.

The Patrol Police of Ukraine also instructs drivers to turn on their side lights, dipped beam headlights, or fog lights in advance.

It is not just on the roads that the lack of light increases the mortality rate. According to the State Service of Ukraine for Emergency Situations, fires now break out more frequently due to the use of generators and gas burners. Over 130 fires occur every day, mainly in the residential sector, and 12 people die on average.

The Ukrainian market has also experienced changes. This year’s “Black Friday” was literally black for Ukrainians as they had to do their shopping in total darkness. With the biggest sale of the year coinciding with a partial blackout across the country, most customers opted for items that can come in handy during water and heat outages.

Russia frequently targets communication facilities so, after each massive shelling, thousands of Ukrainians lose their internet access or any mobile connection at all.

According to Netblocks, which monitors cyber security, the drop in internet traffic was first observed on October 10 during the first mass attack on critical infrastructure. However, in November, communication drops were even more drastic. On November 23, after another attack, internet traffic fell to 35 per cent of the usual level.

One of the solutions has been to switch between different operators – something which became possible due to agreements between Ukraine’s mobile operators. When none of the operators has an available network connection, then radio or Starlinks come into play. Demand for Starlinks has at least doubled this autumn, with some business owners buying them to keep their offices running.

When mobile communications do not work at all, people are left alone in the dark, and may not even know about air alerts. As such, demand for radios and walkie-talkies increased significantly.

Since the beginning of the mass blackouts and the drop in outside temperatures, a new wave of Ukrainian refugees has been forecast. Partially, such forecasts became reality: in recent weeks, according to border crossing statistics, more Ukrainians entered Poland than returned.

However, the gap between these figures is not too drastic, and it is too early to talk about the mass departure of Ukrainians abroad.

Indeed, according to a recent opinion poll, when Ukrainians were asked if they would stay at their current location – even without electricity in the cold season – the majority (65 per cent) answered positively. Others responded that they would look for a warmer place within Ukraine, but very few people (three per cent) confirmed their intention to move abroad.

In search of light

Those who, despite all the difficulties, do not plan to leave, are exploring all possible ways to cope with power the outages.

It is natural for people to seek to continue their usual life despite everything, and therefore Ukrainians try not to give up their daily habits: they read books with a headlamp, have dinner by candlelight, do a manicure in the parking lot, or blow-dry hair in the shopping centre.

Many of those who work online or study remotely also use coworking spaces or “points of invincibility”, places with heat, hot tea, Starlink, and internet connections. In Kyiv, several maps were made to show which places are operating during power outages.

Gas stations, shopping centres, and cafes were all transformed into points of invincibility – very often people come there to study, work, charge gadgets, or in extreme cases – connect an inhaler.

And in order to know when the electricity is switched on at home, in some areas creative residents developed special messenger bots that notify users whether the electricity is on or off. Then people know what is going on at home while they are away in search of light.

Another interesting concept implemented in multi-storey buildings and skyscrapers are the survival kits that neighbours collect and leave in the elevator for those who may suddenly get stuck during an outage.

Recharging points were also installed in the subway, at some Kyiv stations. However, not everywhere was transport able to adapt. In Kharkiv, due to power outages, the metro stopped operating several times. In many areas, public transport, which depends on the power grid, was replaced or services reduced.

Phone data tells us more than anything

Phones can be highly informative about changes in the everyday life of Ukrainians. The data of a pilot experiment among Kyiv youth, who recorded indicators from their smartphones in recent months, provides some interesting details.

In general, screen time remained as high as it was before the October shelling. One of the functions that began to be used more often during blackouts is the flashlight, which is used both at home and on the streets for at least one hour a day among Kyiv residents.

Likewise phone data tells us that during blackouts Ukrainians began to walk more frequently due to shifts in electric transport schedules and elevators being out of use.

Compared to September, in October and November, the average number of steps taken by Kyiv residents increased (by more than 4,000 steps per day). An even more significant alteration occurred in the number of floors climbed: if in September the average number was around 6.5, then in October it was already 8.1, and, in November when blackouts were introduced throughout the whole month, it was 9.8 floors per day.

Of course, it depends on where exactly a person lives: for those on the lower floors, the change was about +2 floors after the blackouts, and for those above the fifth floor (who previously almost never climbed on foot) – the activity increased significantly from 5.8 in September to 8.8 floors in October and up to 12.4 floors in November.

For active young people this is beneficial additional physical exercise, but for the elderly or those with health problems, it is a challenge and a barrier to leaving home at all.

For Ukrainian couriers, it also became an issue, so many delivery services adopted a rule: during power cuts, the courier makes a delivery no higher than the fifth floor, where the customer has to meet him.

This article was co-authored by Alina Horbenko, an analyst at the Transatlantic Dialogue Centre.

Tetiana Maloholovchuk-Skrypchenko is an analyst at the Transatlantic Dialogue Centre.