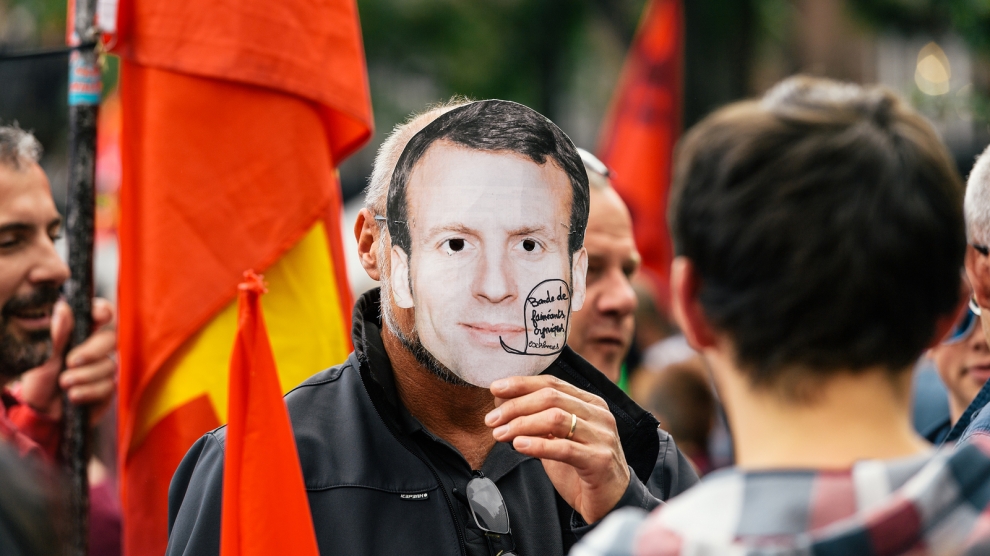 What a difference two years of a mandate can make in politics: when he was elected president of France in 2017, Emmanuel Macron seemed to represent a bulwark against populism at home and rising euroscepticism and Russian meddling in Europeans affairs; today, the French leader doesn’t seem able to fend off unrest at home, his stance in Brussels seems increasingly nationalistic, and his project of a “Europe from Lisbon to Vladivostok” (an expression Macron borrowed from the Eurasianist followers of Alexander Dugin) is sending shivers across most establishments in Central and Eastern Europe.

France’s U-turn has been met with astonishment in the region, as Paris’ rapprochement with Moscow is clearly going against the interest of most (though not all) of those Central and Eastern European countries who live in fear being squeezed between the Germany and Russia, and definitely do not need the French to add more pressure in a region that remains geopolitically volatile. President Macron’s declaration in November 2019 that NATO was “brain-dead” and his veto over opening enlargement negotiations with Albania and North Macedonia seem to confirm worries that France has gone rogue and resumed its old habits of looking down on the region, with potentially disastrous consequences.

Why has Emmanuel Macron so radically changed his viewpoint?

The answer lies in a mix of domestic factors (the Yellow Vest movement has clearly had an impact, along with the successful intellectual offensive of the so-called “realist” school of thought in the president’s entourage) and international frustrations.

President Macron saw himself as the leader of a “European renaissance” and multiplied speeches and symbolic moves to inspire it, but he forgot that he needed to play by the rules and actually convince partners to come with him rather than follow him (in this instance, Germany’s complete lack of flexibility certainly did not help).

Today, France is isolated in Brussels, its original choice of commissioner was rejected (a humiliation for Macron), and the relationship with Germany, thought of as an engine of European integration in Paris, is not far from an all-time low – in part due to the fact that the French are finding it hard to swallow having to become the junior partner in a project it once dominated.

In the meantime, Macron’s very personal approach to the US president, Donald Trump, has borne no fruit, his diplomatic coups d’éclat having resulted in no gains whatsoever for France – if anything, it is the Iran Deal and the Paris Climate Agreement that are now brain dead, not NATO.

Stuck in this impasse, Emmanuel Macron had little choice but to change course. He is now espousing the role of a great disruptor, and Russia is an essential part of that strategy: as Paris can’t count on Berlin or Washington to get its way, Moscow (itself looking for ways to break its isolation) becomes a circumstantial partner, far enough from the French borders not to be perceived as a threat, and powerful enough to provide the disruption Paris is seeking on the European scene (this is of course, not to mention that Russia’s strategy in the Mediterranean is colliding with France’s interests in the region).

The strategy is not new: before Macron, Charles De Gaulle, Jacques Chirac and Nicolas Sarkozy tried to reset relations with Russia (very often with exactly the same international reasoning as today). The fact that none of these attempts really led to any major change in Europe’s security architecture – despite some sectorial in-roads such as the sale of the Mistral warships in 2008 – is probably a sign that the present attempt will lead to nowhere.

In fact, beyond the symbols and the rhetoric, the Russian policy is not a constant in French foreign affairs, but rather strategic tools employed to achieve other goals. The moment France feels that it can get what it wants by getting back into the game, pressure will mount in the diplomatic corps to pull the president back into taking a more constructive approach towards the EU, and with it European security.

This is not to say of course that in the meantime, much damage cannot be done. President Macron’s plan to attend the May 9 victory parade in Moscow this year will (rightly) be taken as a useless provocation by Warsaw (among others) and a move further dividing Europeans – it might come as a surprise at that time that the partisans of European unity at that point will probably come from some of the most eurosceptic (but Atlanticist) parties on the continent.

But at this stage it is unlikely that French co-operation with Russia will move beyond the symbolic and rhetoric dimension: there is no sign that new Mistrals will be sold to Moscow, and French Foreign Minister Le Drian hinted recently in Prague that France’s real interests lie in the centre, not the far East of the European continent. The rapprochement with Russia has its limits, and it might be directed more at changing the paradigm east and south of the Mediterranean rather than in the heart of Europe.

Here lies one of the main reasons why France’s and emerging Europe’s security agendas find themselves in opposition: Paris has historically neglected its relationship with the latter, because France sees its vital interests better protected in its former colonies in West, North and Central Africa, where the Russians have made worrying in-roads recently; in the meantime Central Europeans have (rightly) viewed their security in terms of East-West threats (they have been joined in this view by Germany, although the latter has tried to resolve this Eastern security challenge by negotiations and variations of its Ostpolitik rather than by confrontation).

Paris wants Europe to pay for its power games in Africa, arguing (not unconvincingly) that securing the Sahel is key to stop migrations at the source, while Warsaw, Tallinn and Bucharest (and other national capitals in the region) want the rest of Europe to help them protect their eastern border – which includes investing in the Eastern Partnership countries who consistently have shown willingness to be pulled away from Moscow’s orbit.

Are these views totally irreconcilable? Not necessarily. The migrant crisis has shown emerging Europe’s politicians that security issues south of the Mediterranean also affect their polities, while the Kremlin’s meddling in the 2017 French presidential election and with the Yellow Vest movement in 2018-19 have reminded French authorities of the unique security challenge posed by Russia.

The real question is therefore not whether Europe should choose between priorities to its east and south, but rather how it can secure both its eastern and southern flank. Moving away from the former discussion to the latter will necessitate a much more constructive dialogue between France and Central Europe – and Poland will probably be key to this transition.

Paradoxically, as Germany continues to be politically stuck, the time could be right to kick-start this discussion, if both parties agree to move beyond cheap rhetoric and pay attention to each other’s priorities.