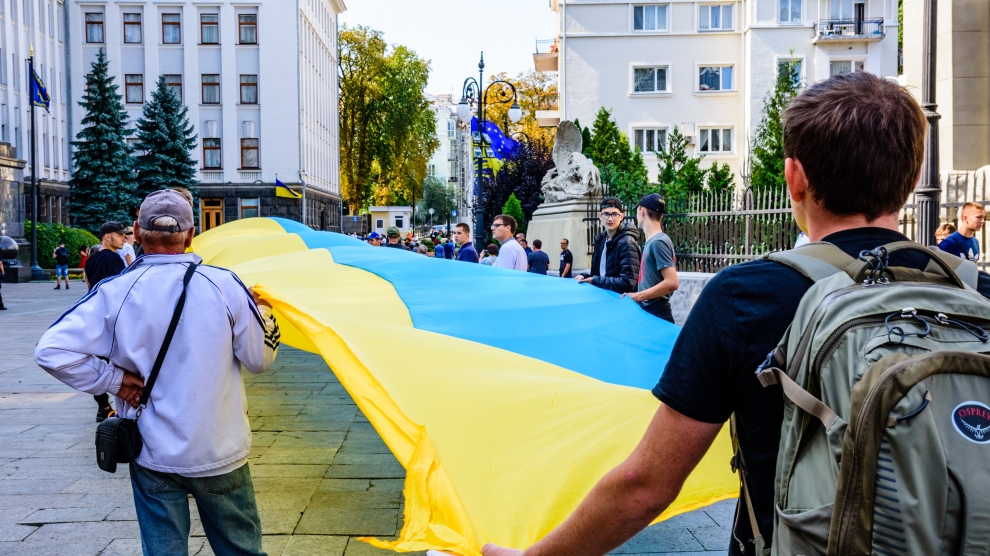 The Covid-19 pandemic has exposed, and to a certain extent, amplified, the political, economic and social vulnerabilities of our societies. For a country that has for more than six years been resisting military aggression from the Russian Federation on one front and fighting the inner enemy of corruption on the other, in Ukraine the threat of the novel coronavirus is especially challenging.

The ongoing conflict in the country has so far claimed more than 14,000 lives and left approximately 3.4 million people in need of humanitarian assistance and protection services, according to official UN data. Despite the Minsk Agreements which were signed in 2014-15 and were supposed to introduce an immediate and comprehensive ceasefire, as well as the gradual disappearance of coverage of the conflict from the international media, the violation of peace has been a daily occurrence in the eastern regions of Ukraine.

The societal trauma of the conflict, mounted on the trauma of the totalitarian communist past and the disgust with endemic corruption, have led to a crisis of trust on both the horizontal and vertical levels. Ahead of the 2019 presidential elections in Ukraine, a Gallup poll revealed astonishing numbers of distrust. Only nine per cent of Ukrainians had confidence in the national government, the lowest level in the world and far below the regional average of 48 per cent.

This partly explains the landslide victory of a political newcomer Volodymyr Zelensky, whose previous ‘political experience’ was restricted to acting the role of the Ukraine’s president in a prophetic TV series, Servant of the People. The historic level of confidence which Ukrainians entrusted Mr Zelensky with during the second round of presidential elections (he took 73.2 per cent of the votes) became a promising baseline for regaining citizens’ trust in state institutions after the years of decay. On the other hand, fulfilling high expectations became a heavy burden. Furthermore, the increased level of polarisation in society and the stark opposition of the 25 per cent of voters who did not back him, who didn’t shy away from expressing their opposition, including on social media, to any step taken by the newly elected president, became a stress test for Zelensky, whose main campaign message was unity.

And here we are, one year after the presidential elections, amidst the unravelling Covid-19 crisis and a drop in Zelensky’s approval rating by almost 30 per cent (to 44 per cent). The expert assessment of both the progress of reform and the response to the pandemic, has varied. While such long-awaited reforms as opening the agricultural land market have finally been adopted, not much progress has been achieved in crucial anti-corruption and judicial reforms. Furthermore, an unexpected reshuffle of the government and subsequent dismissal of the heads of the customs and tax services – who enjoyed a very positive reputation amongst post-Euromaidan reformers -did not offer much assurance about the competency and the long-term strategy of the presidential team.

Since March 17, when there were only a few cases of coronavirus confirmed in Ukraine, the government has introduced drastic measures. Those include closing the state borders, halting international flights to and from Ukraine, shutting down all public transportation, including subways, and most public spaces. While these measures are comparable to those implemented in most neighbouring European countries, the way they were introduced, and the lack of clear and consistent communication caused resistance and misunderstanding from a large part of the population. For most Ukrainians, a low number of cases meant that the threat of the novel coronavirus was still hypothetical and therefore society found these measures disproportionate. Furthermore, fresh memories of the oppressive measures and violence used by the Viktor Yanukovych regime from 2010-14, fuelled people’s dissent.

One of the main indicators of an effective counteraction of the pandemic is trust in governmental actions, but also in each other and each other’s responsible behaviour. For Ukraine, the Covid-19 pandemic is another stress test for societal ability to mobilise and resist (yet another) challenge.

And while the government has been quite effective in preventing the further spread of the virus by introducing early restrictive measures, the underfinanced health care system was not prepared to cope with the crisis. Understaffed hospitals and low paid doctors, lacking personal protective equipment and testing systems – these are the results of years of negligent governance. And once again, as during the Euromaidan and the outbreak of the conflict in the east of the country, civil society volunteer groups have mobilised and acted in parallel to (or sometimes in place of) state institutions, proving their ability to act effectively and efficiently. All over Ukraine the volunteer groups have been actively fundraising, and providing personal protective equipment for doctors, purchasing ventilators and testing kits, conducting awareness campaigns for fellow citizens.

And here comes the recipe for success. In the country with one of the lowest levels of societal trust in the world, where there was no culture of volunteerism before the events of Euromaidan, volunteers enjoy the highest level of trust: 63 per cent, more than the army (46 per cent) and church (also 46 per cent).

Times of crisis create opportunities, and the response to the Covid-19 pandemic and efforts to mitigate the impact, provide another chance for Zelensky and his team to regain people’s trust by showing governmental competence, reliability and achieving tangible results.

Alisa Muzergues is a specialist in EU neighbourhood policy at the think tank GLOBSEC.

Despite sanctions, Nord Stream 2 approaches completion
How Moscow is dealing with coronavirus in Russian-occupied areas of Ukraine
Comment