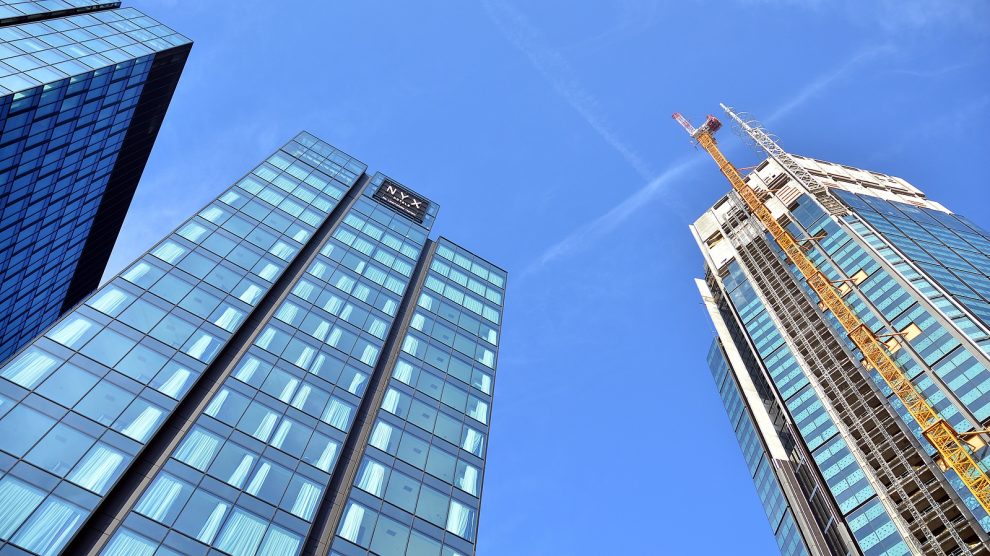 Central and Eastern Europe was late to the skyscraper party, but it’s quickly catching up. Here are ten of the tallest buildings in the region: some of which are still under construction.

Standing at 137 meters high, Floreasca City Center is Romania’s highest building. Completed in 2013, it has 37 floors and a floor area of 214,000 square meters.

The tower is primarily used for commercial purposes, but it also features a restaurant on its uppermost floor. At ground level, the building offers visitors a shopping and entertainment centre.

Although situated on the northern outskirts of Bucharest, the building can be reached conveniently via the Aurel Vlaicu Metro Station.

This 153-metre building is the highest on the Vilnius skyline. It has 33 floors designated for commercial usage, as well as an open terrace observation deck at 114 meters.

The structure was officially opened in May 2004 to celebrate the country’s admission to the European Union. It stands in Vilnius’ so-called new city centre or business district, on the banks of the Neris river.

This Kyiv skyscraper is 168 metres tall and has 57 floors. Completed in 2012, it is primarily a residential building with limited commercial usage.

This building, currently under construction in the Slovakian capital, is expected to be 168 meters tall and to have 47 floors. The project is set to be completed in 2023 and it will be the country’s first true skyscraper.

Situated along the Danube river, the large structure will primarily offer residential space, as well as other “lifestyle, cultural and sporting activities”, and a shopping centre.

Currently, the highest building in the country is the 125-metre Nivy Tower, but Slovakia is also planning to erect five more towers over 100 metres in height by 2026.

The tallest building in Bosnia and Herzegovina and the whole of the Balkans is the 172 meters tall Avaz Twist Tower located in the prestigious Marijin Dvor neighbourhood of Sarajevo. The project was completed in 2008 and the building’s viewing platform is open to the public.

The tower is also home to the headquarters of Bosnia’s best-selling newspaper Dnevni avaz, as well as Avaz.ba, the most visited website in the country.

Georgia’s tallest building is 200 metres tall and located not its capital Tbilisi but in the Black Sea town of Batumi.

The tower was completed in 2012, and, as suggested by its name, was intended to house the American Technology University. However, plans for the educational institution were dropped and the skyscraper was sold to the American hotel and leisure company Starwood Hotels and Resorts in 2015 for 25 million US dollars.

The most unique aspect of the massive building is the fully functioning ferris wheel built into the facade at a height of 100 metres. The attraction offers room for 40 people at a time.

Georgia is also currently constructing the Cube Tower in Batumi, which is expected to be completed by 2025, with some sources suggesting it could be 260 metres tall. Also under construction in Batumi are the Alliance Centropolis, Alliance Privilege, Babillion Tower and Orbi City, all set to top 200 metres.

Once completed, Sofia’s Sky Fort is expected to be 202 metres tall and will have 47 floors. The project is scheduled to be completed in 2022 and its main function will be to provide office space.

The building is located away from Sofia’s historic centre but easily accessible via the Inter Expo Center metro station, and is in close proximity to Sofia Business Park.

It is being developed by the Fort Noks Bulgarian estate agency which is mainly focused on seaside property but also completed Capital Fort (126 metres), currently the highest building in Bulgaria.

Topped out in 2021, the tallest skyscraper in the Azerbaijani capital Baku is 276 metres high. Baku Tower contains 49 floors of office space.

Baku is also home to a number of other impressive buildings, including Crescent City (210 metres), the SOCAR Tower (209 metres), as well as the three famous Flame Towers, the tallest of which climbs to 182 metres.

Topped out in February of 2021, Varso Tower is the tallest building in Poland and the European Union. It is the same height as the London Shard.

The structure offers 53 floors of office space and it features two more buildings in addition to the main tower – Varso 1 (81 metres) and Varso 2 (90 metres). The tower will soon also offer visitors an observation deck, a restaurant and a bar on it highest floors.

The building was completed by HB Reavis, a real estate development company first established in Bratislava and now mainly operating in Slovakia, Poland, the U.K. and the Czech Republic.

Varso is located a 10 minute walk from the Warsaw Palace of Culture and Science, for decades the tallest building in Poland, standing at a height of 231 metres. The city’s skyline also includes the Warsaw Spire (220 metres), the Warsaw Trade Tower (208 metres), and the Warsaw Unit (202 metres).

Also topped out this year, the 311-metre tall Abu Dhabi Plaza is the tallest building in the region. The structure has 75 floors and offers both office and residential space.

The structure offers close to 27,000 square metres of space. It features a four-star Sheraton hotel with 190 rooms and 100 apartments, as well as a shopping centre. The project was developed by Aldar Properties, headquartered in Abu Dhabi, and represents the company’s first construction project outside of the United Arab Emirates.

It is situated in the most central part of the Kazakh capital, between the recognisable Baiterek Tower and the Linear Park, and a 20 minute drive from Nursultan Nazarbayev international airport.

In addition to the Abu Dhabi Plaza, Kazakhstan has several other impressive skyscrapers, including the Emerald Towers 1 (240 metres), Northern Lights Towers WTC Nur-Sultan (221 metres), and the Kazakhstan Temir Zholy Building 2 (208 metres) in Nur-Sultan, as well as the Esentai Tower (200 metres) in Almaty.

Top photo: The Varso Tower in Warsaw under construction.

Six of the best: CEE movies at the Sarajevo and New Horizons film festivals
Polish javelin thrower auctions silver Olympic medal for charity, only to get it straight back
Comment