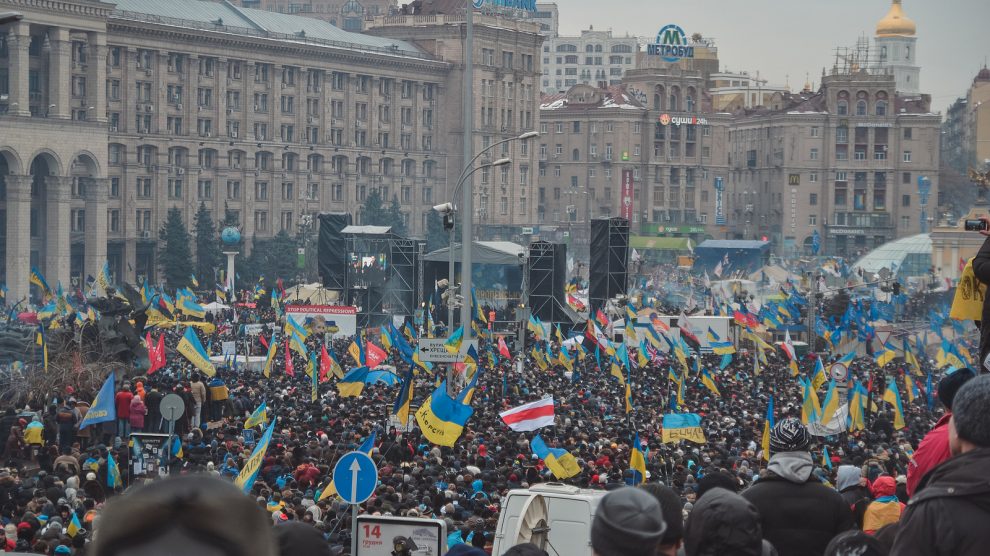 An insightful Netflix documentary provides much needed background to current events in Ukraine, and clues as to why a once divided country has united to fight the Russian invaders.

There is little doubt that prior to February 24, Russian dictator Vladimir Putin genuinely believed that Ukraine would crumble within days, if not hours, of his forces invading the country.

He was not alone.

Across the world, few political analysts (beyond the few – and they are just a few – who know Ukraine well) believed that Ukraine would offer the kind of heroic resistance it has so far demonstrated. (On November 6, Ukraine announced that it had liberated more than 50 per cent of territory lost since February).

Fewer still believed that Ukrainians would rally behind a comedian and actor turned president, Volodymyr Zelensky, whose list of achievements since taking office in 2019 had been modest.

In essence, Putin believed that he would be fighting Ukraine as it was prior to the Maidan Revolution, also known as the Revolution of Dignity, that definitively changed the country during the winter of 2013-14.

Evgeny Afineevsky’s fast moving 2015 Netflix film Winter on Fire – still available on the platform across the world – was the streaming giant’s first documentary to be nominated for an Oscar. It premiered at the 72nd Venice International Film Festival, and at the 2015 Toronto International Film Festival won the People’s Choice Award for best documentary.

Using some incredible footage (parts of which, it should be said, are difficult to watch) it follows the Maidan Revolution from its beginnings in November 2013 when a handful of people began protesting in Kyiv’s central Maidan Nezalezhnosti – Independence Square – against the decision of Ukraine’s then president, Viktor Yanukovych, to reject an association agreement with the European Union in favour of closer ties with Russia, and a bailout from Russian banks.

A country comes together

Despite the violent reaction of the berkut, a militarised arm of the Ukrainian police force, protests continued throughout December 2013, becoming increasingly larger in size. With support from retired military officers, protesters built defensive barricades and learnt how to mobilise and organise.

Maidan defence groups were created, including a Jewish Defence Unit, at a stroke undermining attempts by the authorities to portray the protesters as fascists. Many of the current defenders of Ukraine’s towns and cities learnt their trade during Maidan.

There was also overt support from the Orthodox church, Ukraine’s Muslim leaders, and the trade unions. Then, as now, the country came together.

When, on December 11, the berkut launched a full-scale assault on Maidan, a priest at St Michael’s Monastery rang all of its bells in warning: the first time that every bell had been rung in unison since the Mongol invasion of 1240.

Some of the worst of the violence came in January. As protesters marched peacefully from Maidan towards Ukraine’s parliament, they were met with more berkut violence on Hrushevskoho Street, at the entrance to football team Dynamo Kyiv’s Valery Lobanovskyi stadium. At least eight people were killed, but the protests continued into February, despite tough, hastily-introduced laws that forbade demonstrations.

One of these laws made the wearing of motorcycle helmets – which protesters had been wearing to help protect themselves from berkut beatings – illegal. Instead, they took to wearing cooking pots on their heads.

By mid-February, with Ukraine’s Health Ministry admitting that more than 100 people had been killed since the beginning of the revolution, Yanukovych’s position was increasingly untenable. On February 21 he fled the country, and continues to live in exile in Russia. The berkut were disbanded.

If US intelligence reports are accurate, Yanukovych was Putin’s first choice to takeover as Ukrainian president should his invasion have succeeded. Winter of Fire makes it clear that Ukrainians would not have welcomed him home. 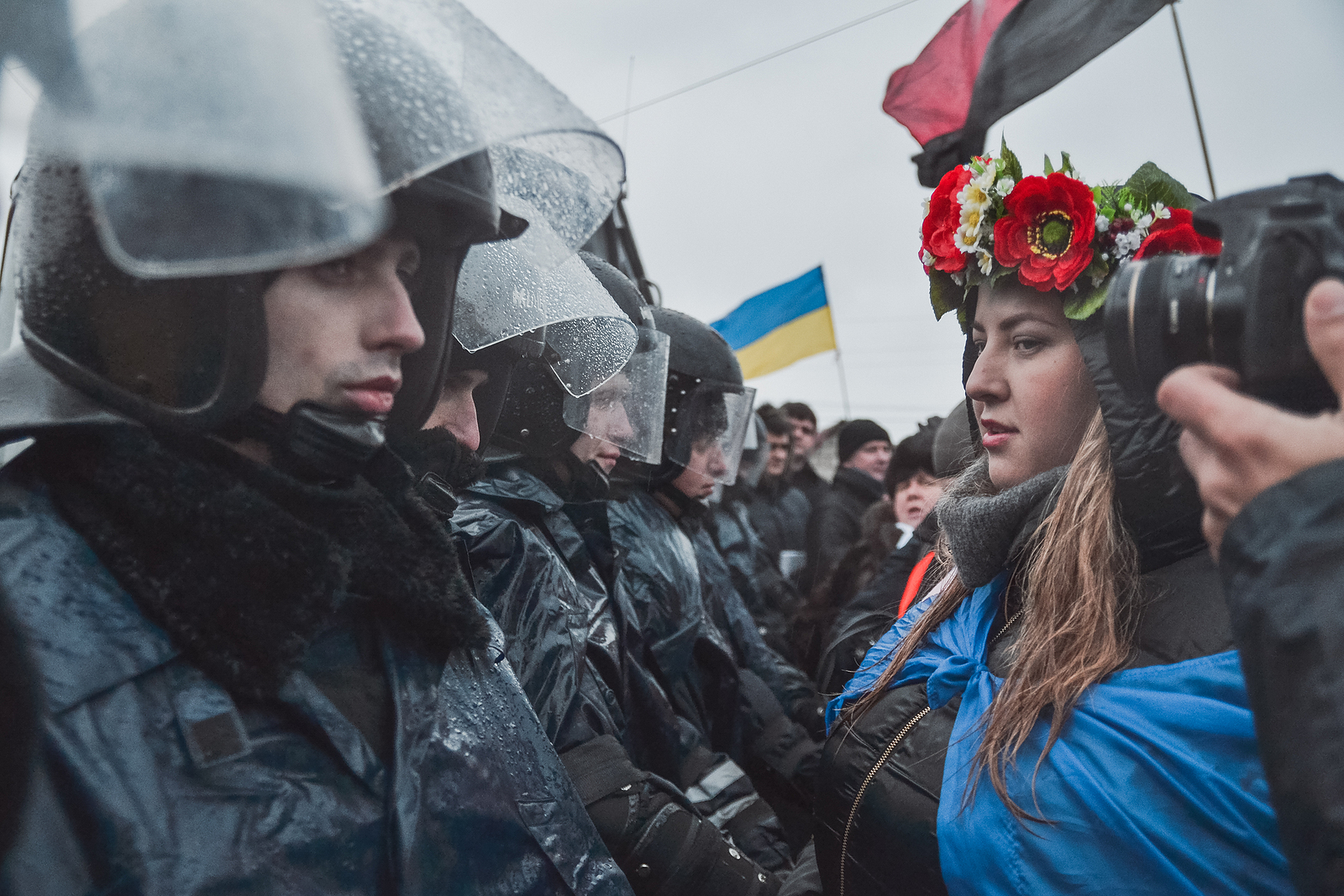 What happened next is not covered in Afineevsky’s film, but it is worth mentioning here.

Taking advantage of the chaos created by Maidan, Russia annexed Ukraine’s Crimean peninsula. Russia then sent special forces and mercenaries into the Donbas region in the east of Ukraine to organise an anti-Kyiv armed uprising. They seized large parts of the region (much of which was later recaptured by Ukrainian forces) but held on to the two cities of Luhansk and Donetsk, around which two rump statelets, the Luhansk People’s Republic and the Donetsk People’s Republic, were created.

As in Crimea, both would soon after vote in rigged referenda in favour of independence from Ukraine.

Afineevsky’s film is remarkable for a number of reasons, but the most important is that it is not a political document: it succeeds by avoiding any attempt at political analysis, instead concentrating on the struggles of the ever-expanding crowds and amplifying the fact that protesters came from all walks of life: young and old, men and women, Christians, Jews, Muslims, academics, lawyers, artists and workers, including militant miners.

They found common cause in the removal from office of a man who had promised closer ties to the European Union, but who instead chose once again placing Ukraine firmly in Russia’s orbit.

Ukraine united in 2014, and has remained united ever since. Elections have been free and fair: presidents, governments, have come and gone, but always peacefully.

If Putin thought he could again divide Ukraine by invading the country, he was wrong. Zelensky’s erstwhile opponents have rallied around the president. Free Ukraine remains strong. It did not crumble when attacked by Yanukovych’s berkut in 2013-4, and it will not crumble now.

One final note: Winter on Fire should not be confused with Ukraine on Fire, an utterly ridiculous piece of Kremlin propaganda worth less than a Russian rouble in which Oliver Stone lobs the softest of questions to Yanukovych while blaming the United States for Ukraine’s ills. It screened on Russian TV but was given short shrift everywhere else.