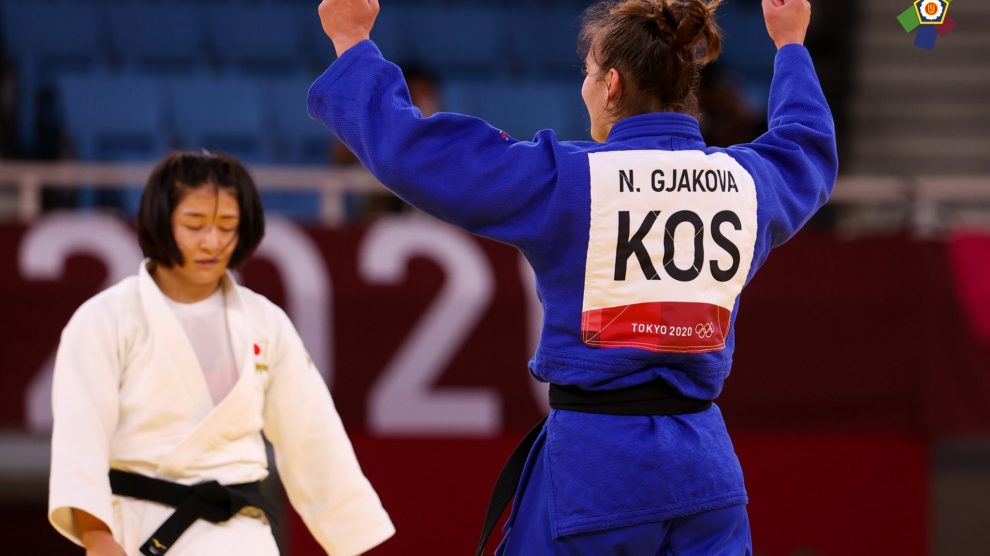 Kosovar judokas consistently reach exceptional success at European and world championships, and now the Olympics. This has brought immense national pride to Europe’s youngest nation and triggered changes in society.

Tokyo 2020 is only the second Olympic Games in which Kosovo gets to compete as an independent country. At Rio 2016 — the country’s Olympic debut— its small delegation of eight athletes already managed to bring home one medal. This year in Tokyo, Kosovo secured two gold medals during the first week of the Games. And guess what, they’re all in women’s judo!

In fact, out of all 11 athletes that are now in Tokyo, there are six judokas.

Kelmendi debuted at the London 2012 Olympics under the Albanian flag, but unfortunately, she lost in the second round. In 2014, she received an offer from Azerbaijan to compete for them but refused. Four years later, Kelmendi represented Kosovo and won a gold medal.

On July 24, Kosovo became one of the first countries competing in the 2020 Games to receive a gold medal after Distria Krasniqi defeated Japan’s Funa Tonaki in the women’s 48 kg category.

With the two gold medals, Kosovo now ranks 14th worldwide, ahead of Italy, which has 372 athletes and Switzerland which has 107.

“When Majlinda Kelmendi won the first gold medal in 2016, I was in Peja at the Hotel Dukagjini restaurant, which only seats about 100 people and all the TVs were on the last judo match. The second she won, I felt like I was surrounded by a million fans cheering and clapping; the ambience was at a level I didn’t think it would ever experience. I will never forget the feeling,” Kosovo native Sokol Morina tells Emerging Europe, reflecting on the extent to which Kelmendi is celebrated and highly regarded in her home state.

However, women have not always enjoyed such high respect in Kosovar society. Until not too long ago, women faced gender-based discrimination in several aspects of their life, argues Beqir Shillova of the British Albanian Kosovar Council.

“I could say that only for the last few years people have treated their sons and daughters equally when it comes to inheritance, for instance. Previously everything would go to the sons and nothing to the daughters,” Shillova tells Emerging Europe.

Despite more than 95 per cent of Kosovo’s population identifying with the Muslim faith, it is also known as one of the most secular Muslim-majority countries in the world, with only a small fraction of the population strictly abiding by the Islamic doctrine. This, however, does not mean that women have not historically faced barriers to fully participating in every aspect of society.

Judoka Majlinda Kelmendi may now be a national hero, but there was a time when judo was not an activity for females.

“I remember training judo myself in the 1980s, and there were very rarely any girls, except if they were joining a brother or a relative for a training session here or there,” Shillova recalls.

“Majlinda Kelmendi was the first to break the barrier and to prove that in Kosovo’s judo is not for males only, at all levels, she has won more titles and medals than anyone else,” she adds.

How times have changed for Kosovar women and sportswomen, and pop stars have contributed to that.

“With Majlinda, in Kosovo, woman’s interest and participation have increased not only in judo but sports in general,” further argues Shillova.

In Kelmedi, Krasniqi, and Gjakova’s hometown Peja, the popularity of judo has skyrocketed, and it now has six judo schools, 17 clubs and at least 1,200 registered judokas. Girls and young women are particularly interested in the sport.

“The fact that all three Olympic medallists in Kosovo’s history are females is a very good sign of increasing awareness for gender equality,” Arianit Bobaj, also originally from Kosovo, tells Emerging Europe.

Bobaj points out that there are plenty of successful women in other domains.

“We also have many other women who have achieved a lot of success worldwide, like singers Dua Lipa, Rita Ora, Bebe Rexha and Ava Max. We have a female president, Vjosa Osmani, who is the most voted for person in the history of Kosovo.”

“In recent years, a lot has improved in the country regarding gender equality especially when it comes to women in politics. Currently, we have a female president, but we had the first female president in 2011 as well,” says Shillova referring to Atifete Jahjaga, who served as head of state until 2016.

Despite the growing awareness and the expansion of the social sphere in which women regularly participate, there are still invisible barriers to true gender equality.

While 18.9 per cent of working-age women are economically active, 81.9 of women in this age range are not. This is significantly higher than the 43.3 per cent of men of age who are not part of the workforce – the largest such gap in the Western Balkans.

“Some women still face challenges in life, such as the pressure to get married early or having to bear most of the burden of housework, but these things can vary from family to family. I would not say that Kosovo has not achieved full gender equality, but neither has any other country in the world,” Viosa Gjoshi tells Emerging Europe.

“Growing up with parents from Kosovo, I have never felt that there is something I cannot do because I’m a girl,” adds Gjoshi, a university student who was brought up in England.

“Personally, I feel very proud of my country for supporting and appreciating the women’s role in our life. In return, we got three gold medals!” exclaims Bobaj, pointing to the significant impact judo has had on people’s attitudes towards what women’s place should be in society.

“There is no doubt that these new achievements will sow seeds for future talents, in judo especially, so…lookout for Kosovars,” concludes Shillova.