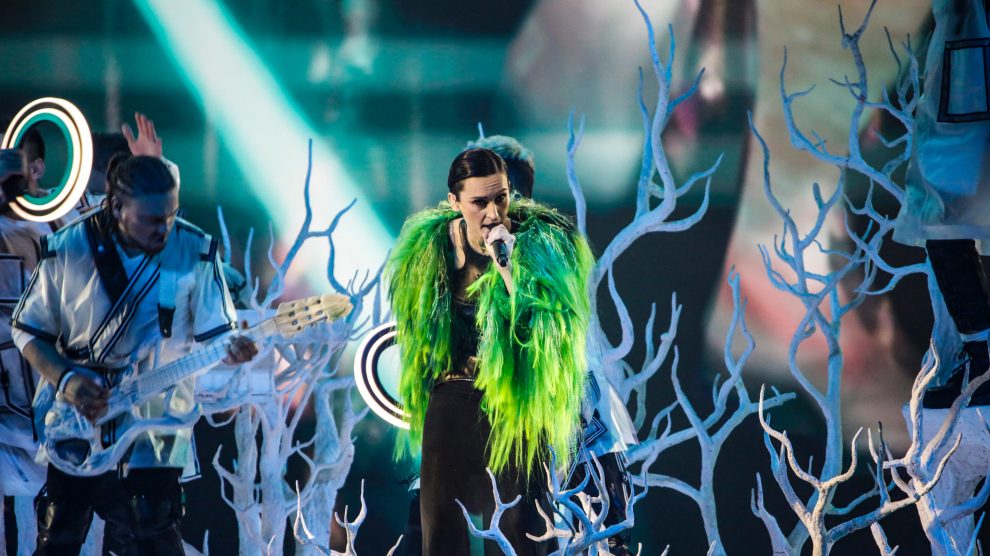 Ukraine’s language law whose goal is to revitalise the national language is now being applied to music — and some believe that this may be the push needed to propel Ukrainian music into the mainstream.

Since independence, language has been a contentious issue in Ukraine. And the reasons are obvious: for decades, the Russian language has dominated the public sphere.

Most major Ukrainian cities — Kyiv, Kharkiv, Dnipro, Simferopol, Odesa, Zaporizhzhia, Donetsk, Luhansk — are predominantly populated by Russian-speaking Ukrainians. And while the bulk of the countryside speaks Surzhyk — a kind of patois blending Russian, Ukrainian and other neighbouring languages — the economic and cultural centres of the country continue to be dominated by the Russian language.

Statistics from Apple Music paint a clear picture of the rather secondary role the Ukrainian language plays in Ukraine’s cultural sphere.

As part of its City Charts project, the streaming service publishes a list of 25 of the most streamed songs in certain cities. Kyiv’s most recent chart only had four songs composed by Ukrainian artists, all four of which were sung in Russian. Otherwise, Russian and Russian-language artists from countries like Kazakhstan and Belarus filled up the remaining places.

In 2019, the language laws were expanded further with the passage of the law on Ukrainian as a state language. Now, Ukrainian was made to be the predominant language in virtually all spheres of life, including business and the media.

Now, 35 per cent of the songs on a radio station’s daily playlist are mandated by law to be in Ukrainian. While this has arguably watered down the quality of music being played on the radio, it undoubtedly provides a platform for Ukrainian-language artists to gain a foothold in their country’s cultural sphere, as well as providing an incentive for local artists to perform songs in their own language.

For Zbaraski, a Ukrainian singer, this is an effective, if not natural way, to boost Ukrainian-language music.

“This can popularise Ukrainian songs that are legitimately good, and also help poorer artists step their game up a level,” Zbaraski tells Emerging Europe.

Zbaraski, a native of the western Ukrainian region of Ternopil, is relatively unique in the contemporary Ukrainian music scene for his decision to sing solely in Ukrainian. And while many critics of the ‘Ukrainisation’ campaign in music claim that such regulations will hamper Ukrainian artists’ international commercial success, Zbaraski believes that it will have little effect.

Backing up his argument, he brings up the case of Okean Elzy, Ukraine’s most popular rock band, hailing from Lviv. The band also performs their songs virtually exclusively in Ukrainian; yet, prior to Maidan and everything which followed, the band regularly performed in sold-out stadiums throughout Russia, with audiences singing along to their Ukrainian-language compositions.

A second example brought up by Zbaraski is Go_A, which represented Ukraine in Eurovision 2020 – the folk-rock group was the first Ukrainian act to chart on the United States’ billboard charts.

Music, like many other facets of life in Ukraine, has also become a battleground for Ukraine’s culture wars. Unfortunately, with the events that followed the Maidan revolution, the Russian occupation of Crimea, and the Russian-backed insurrection in the Donetsk and Luhansk regions, the status and use of the Russian language has become a thorny issue, even in music.

In early July, an incident at a Puma shop in Kyiv illustrated just how much controversy lingers around the subject. The company had earlier announced that they would be collaborating with Ukrainian singer Ivan Dorn, sparking fierce criticism from nationalists. These nationalists ended up ransacking a Puma store, scrawling the phrases ‘separatist sponsors,’ ‘terrorists’ and ‘blood business’ on the floors.

Ivan Dorn has long attracted the chagrin of Ukrainian nationalists. Popular throughout the Russian-speaking world, he drew controversy for continuing to perform in Russia, even after the occupation of Crimea and the breakout of war in Donbass. Famed far-right activist Serhiy Sternenko branded Dorn a ‘pro-Russian collaborator for whom the aggressors are brothers.’

This was in reference to comments made by Dorn in 2017 when he told Russian journalist Yuri Dudya that he considered Russian and Ukrainian people to be ‘brothers.’

Thomas Mann said that everything is politics. No matter how much people try to distance such things as music and sports from politics, ideology inevitably creeps in, as it does with any other facet of life. And even the absence of an ideological stance can itself be considered a position in favour of the status quo.

As such, it is not hard to see why many would view Dorn’s decision to continue touring Russia as a kind of validation of Russia’s actions in Ukraine. The absence of a clear, principled position on the issue can be interpreted as a tacit acceptance of what Russia has done.

“A public figure like Ivan Dorn should be ready for these kinds of questions and should be conscious of how they answer. In this heated situation, you should be mindful of the kind of message you provide to the people,” says Zbaraski.

In the era of globalisation, cultural barriers are being broken down. Lifestyles throughout the world are becoming homogenised, as are all facets of life from architecture to music. In such a situation, many feel striving to preserve cultural identity is a folly, rowing against the irreversible tide of history.

However, this trend towards homogenisation can also deprive the world of its diversity and variety, necessitating a kind of balance between cultural preservation and modernisation.

How judo changes gender and social norms in Kosovo
Doing away with borders in the Western Balkans is a great idea, but infrastructure must not be neglected
Comment