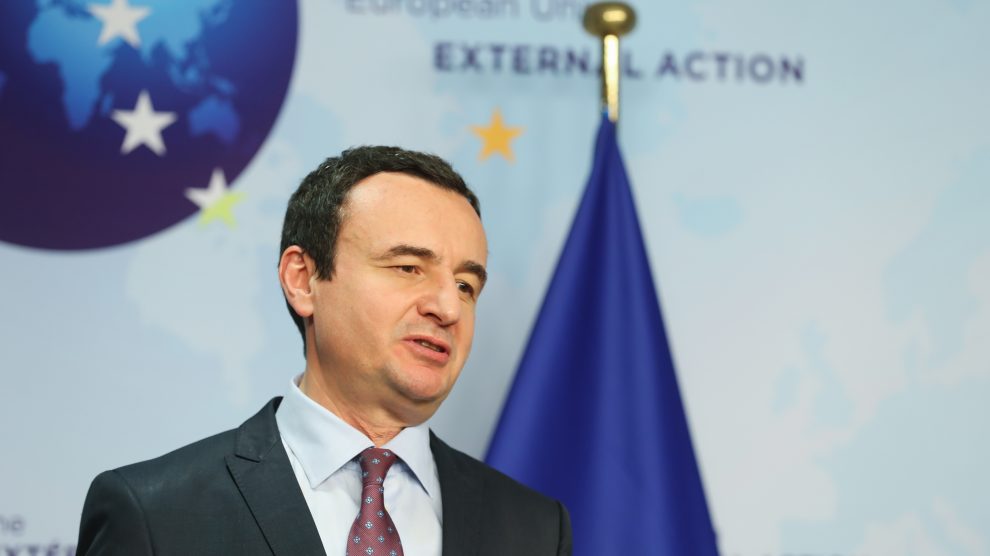 Kosovo’s Prime Minister Albin Kurti stands an excellent chance of succeeding to make Kosovo a model of progressive democracy, advanced economy, and social equality that no other Balkan state can rival. The question is, will he and what would it take?

Kosovo’s prime minister, Albin Kurti, came to power fortified by a landslide election victory in February that allows him to have greater maneuverability and latitude to initiate bold policies – be they domestic or foreign – to advance his country’s national interest.

Another big advantage Kurti enjoys is that US President Joe Biden has a special affinity to Kosovo and has already demonstrated his wholehearted willingness to assist Kurti to overcome many of the problems facing his nation since its inception in 2008.

Whereas any newly-born country goes through the painful processes of becoming economically viable, self-reliant, and at peace, Kosovo faces the extra burden of not being recognised by its neighbour, Serbia, which is impeding its integration into the European Union.

But for Kurti to succeed where his predecessors have failed, he must focus on what is ailing his country while demonstrating his willingness to have a continuing dialogue with Serbia as long as such a dialogue does not compromise in any way Kosovo’s independence.

Kurti must tackle several major domestic problems to help Kosovo stand on its feet and considerably enhance its chances to integrate into the EU, which he and his fellow citizens strongly aspire for.

Addressing the endemic corruption in Kosovo from within government strata as well as the private sector should top his agenda.

To weed out corruption is a monumental task and cannot be dealt with in a wholesale fashion. The State Inspector’s General Office should be adequately funded and given the authority to inspect the working of any ministry or private companies at will and with no advance notice.

Persons involved in the inspections should be men and women of impeccable reputation and integrity who enjoy the public’s trust. Dealing with corruption will have a direct effect on foreign investments, as investors shy away from countries where corruption is widespread, especially when government officials are on the take. In addition, Kosovo’s prospective integration into the EU will dramatically improve.

The recent arrest of seven officials at the Agency for Agricultural Development, suspected of taking bribes in exchange for receiving grants, and the pending arrest of an additional 23 people provide a good example. These arrests and prosecutions will not only punish the perpetrators but send a clear message to all government officials that corruption has consequences.

Protecting human rights is one of the utmost requirements that allow the citizenry to feel safe, secure, and live without fear or intimidation. Human rights must be blind to colour, ethnicity, sexual orientation, and religion, and all must stand equal before the law.

Moreover, children in particular have an inherent right to health care, free education, and adequate nutrition to grow cognitively healthy. Indeed, social equality is the bedrock of human rights.

Citizens who are not abused, whose rights are not violated, and who are treated fairly and with dignity become more productive and patriotic, caring deeply about their country and often going out of their way to contribute to the welfare and wellbeing of their society.

Economic development is the beating heart of any country and in the case of Kosovo it is even more critical, especially because of the rampant poverty, high unemployment, inadequate domestic and foreign investment, and the overall unfriendly business environment.

Certainly, weeding out corruption in high places will encourage investment in major development projects, including infrastructure, manufacturing, housing, and in high tech.

However, one of the most critical investments by the government should be in sustainable development projects, whereby small communities collaboratively develop their own projects that provide jobs for local individuals, especially young adults. Such projects, for example, may include small animal farming, tree planting, manufacturing of certain machinery components, etc. These projects are cost effective and often produce income in a fairly short period of time.

The government’s appropriation of funds, along with USAID and World Bank financial support for sustainable development projects, will go a long way toward economic growth as long as the investments are made for specific projects and the community involved is accountable.

Although Kosovo is a secular democratic country, like all democracies it must be protected with zeal, nurtured, and never taken for granted.

There are always anti-democratic forces who will exploit any opportunity to undermine the democratic process for personal gains. Poland and Hungary, which ironically are EU members, and the US, which is one of the most democratic countries in the world, were seriously threatened by authoritarian leaders — in the US by Donald Trump and his followers, which would have been inconceivable before his rise to power.

For Kosovo to remain a vital and flourishing democracy, the government must ensure that the basic elements of democracy are fully protected by law. This includes free and fair elections, freedom of the press and assembly, judiciary free of political influence, and accountability by all governing authorities.

Moreover, Kosovo as a secular democracy must protect its democratic foundation by not allowing religion to intercede in civilian affairs and not allowing any foreign power, such as Turkey, to use Islam a tool by which it can influence the domestic affairs of Kosovo.

The concerns that Kurti has about the degree to which Kosovo should collaborate with Serbia on major projects, like water management of Lake Ujman, renewable energy, trade, and the conflict over the association of three Serb-majority municipalities in Kosovo, should not prevent him from collaborating with Serbia as long as such cooperation does not infringe on Kosovo’s independence.

Moreover, given that the US and the EU strongly support dialogue between the two countries, Kurti should demonstrate that he is more than willing to follow their advice and put the onus on Serbia for any lack of progress.

Kurti was on the mark when he recently tweeted, “To renew our transatlantic alliance, I suggested synchronisation of #Washington and #Brussels in the Western Balkans while we work on three goals. 1. Democratisation by strengthening rule of law. 2. Security through NATO membership. 3. The unity of Europe through Western Balkan membership of the EU.”

That said, Kurti should have also added the need for continuing dialogue with Serbia, because any progress on that front will dramatically help him realise his three aforementioned goals. Otherwise, absent mutual recognition and the continuing conflicting issues between Serbia and Kosovo, the prospect of normalisation between the two countries becomes as distant as it has ever been.

I believe that Kurti has a momentous opportunity to dramatically transform the socio-political and economic conditions in Kosovo. He should be wise enough not to allow his personal convictions in relation to Serbia in particular to translate into stubbornness, and remain open-minded to the advice of the EU and the US, which are committed to Kosovo’s wellbeing and independence.