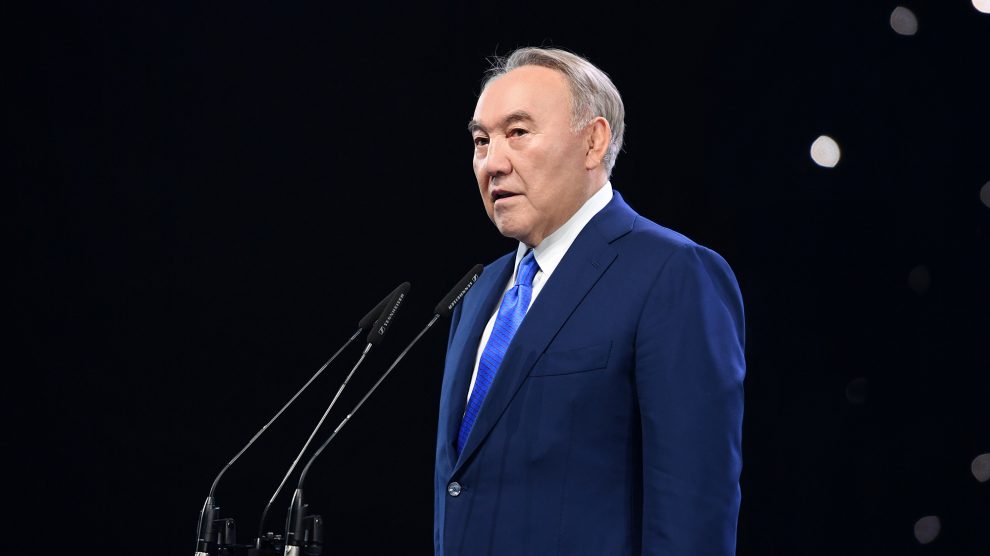 Oliver Stone’s new documentary about Nursultan Nazarbayev aimed to lionise the long-time leader of Kazakhstan, but has instead attracted derision both within Kazakhstan and abroad as a shameless piece of propaganda.

The maker of iconic films like Scarface, Platoon and Any Given Sunday is back. However, this time, it’s not a Hollywood blockbuster, but an eight-hour-long documentary entirely about the Republic of Kazakhstan’s first (and essentially only) head of state, Nursultan Nazarbayev.

Titled Qazaq: History of the Golden Man, the film premiered on July 6, Nazarbayev’s 81st birthday in the Kazakh capital of Nur-Sultan. The eight-part series is based on extensive interviews conducted by Oliver Stone with Nazarbayev over the past two years.

‘The Man Who Surprised Everyone’

For anyone familiar with Oliver Stone’s non-Hollywood career, this would hardly come as a surprise. The American filmmaker has publicly wholeheartedly expressed his support for certain Kremlin narratives about geopolitics and history.

He was critical of the Maidan revolution, which toppled the presidency of Viktor Yanukovych. In late 2014, nearly a year after the revolution, Stone conducted a four-hour interview with Yanukovych, in which he essentially allowed the ousted president to give his side of the events, completely unchallenged. He has also done similarly one-sided interviews with Viktor Medvedchuk, a Ukrainian billionaire with close ties to the Kremlin, and, in 2017, with Vladimir Putin himself.

As such, for many, it was expected that Stone would go on to make a propagandistic puff piece for another unsavoury character.

“It looks like the old man is trying to secure his legacy,” a member of the outlawed Kazakh political party Democratic Choice who preferred to stay anonymous tells Emerging Europe. “I wouldn’t even bother with watching it, from an artistic or even informational perspective. This is naked propaganda.”

“Call Nazarbayev what you want — dictator, strongman, tyrant, founder,” Stone wrote on Twitter, “You’ll find him to be a modest man explaining the Soviet empire’s demise and his important country’s transition to an independent nation, including the disposal of its nuclear weaponry.”

For many Kazakhs, this reads like a sick joke. Many adjectives are used to describe Nazarbayev, but hardly ever the word “modest”. This is, after all, a man who named his country’s capital city after himself, has statues of himself adorning virtually every major city in the country (including two which were inaugurated this year on his birthday) and granted himself the title of elbasy, meaning “father of the nation.”

Even the cinema the documentary was premiered in, like many other things ranging from airports to universities, is named after the Kazakh leader. The title of the film, History of the Golden Man is a direct reference to an ancient Scythian prince buried with 4,000 gold ornaments whose tomb was discovered in 1969 — it isn’t hard to decipher the parallels that Stone and Nazarbayev are attempting to draw here.

Nazarbayev is very much cut from the same cloth as the several autocrats who began springing up in the post-Soviet world; however, lacking the over-the-top antics of Gurbanguly Berdimuhamedow or the confrontational verve of Aleksandr Lukashenko, he has somewhat flown under the radar.

In power since Kazakhstan’s independence, he has ruled with an iron fist, jailing activists, outlawing opposition parties under bogus charges of “extremism”, and, allegedly, siphoning huge amounts of public funds for himself and his inner circle.

‘The Audacity of Democracy’

Although he officially stepped down as president in 2019, he is nevertheless undoubtedly in charge of the country through his official office of elbasy. He maintains a public cult of personality, with his likeness adorning boulevards, offices and train stations.

In interviews about the documentary, the director seems nonplussed about the subject’s reputation. “I’m not going to come over and lecture these people about how to run their country and how to run a democracy,” Stone said in an interview with The Guardian. “It [democracy] doesn’t work. Democracy barely works in the US.”

From what is publicly available of the documentary (so far, there is only a trailer on YouTube), it appears that this will be the predominant narrative: that western-style liberal democracy has no place in Kazakhstan, that Kazakhs need the guidance of a strong leader.

“This is how he legitimises his rule,” Emerging Europe’s interviewee says. “He creates a false dichotomy that Kazakhs can either enjoy slow but stable progress under his rule and his system or fall victim to decadent anarchic western-style democracy. Obviously, this is nonsense — our people are capable of choosing competent, representative leaders for ourselves who can develop our country. But this documentary is an attempt to cement Nazarbayev’s narrative — and I fear people may fall for it, especially with a big name like Oliver Stone validating the documentary.”