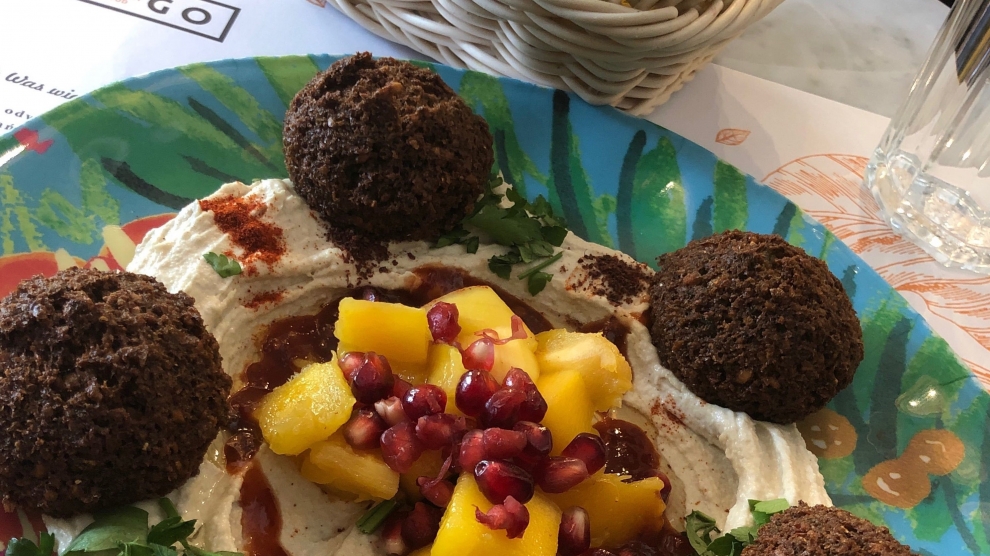 Travelling the world on business can often be a challenge for a vegan. Conference organisers hardly ever offer meat and dairy-free options, and there’s usually little time to search for vegan restaurants or those that at least have vegan dishes on the menu. I often find myself sticking to bread and veggies or fruit.

So I always look forward to going to Warsaw. Not because conference organisers there cater to my diet, far from it. But unlike other cities, even London, Warsaw is dotted with great vegan dining options. During my last visit, the WeWork space on Krucza street was my HQ, and come lunchtime I had several options within a 200-metre radius.

At Mango Street Food, just next to WeWork, I treated myself to delicious parsnip soup and a mango plate with hummus, falafel and eggplant. After meetings near the Politechnika metro station, I went to Plac Zbawiciela (Saviour Square), often referred to as Zbavix by local hipsters, and tried a typical Polish lunch at Veganda — mashed potatoes with sauerkraut and a pork chop (except this pork chop was made of soya).

Burgers are always the easiest and most frequent vegan dishes offered by various restaurants around the world but the options of vegan restaurants in Warsaw is far more diverse: Italian, Japanese, Jewish, Mexican, whatever comes to mind. Sometimes there’s too much choice.

Take Poznańska, a tiny street very close to the infamous Palace of Culture and Science and a vegan Mecca. Talking about the Tel Aviv restaurant in that context might not be politically correct as that place describes itself as “Israeli vegan fine dining” but all Middle Eastern cuisines have a lot in common. And yes, Tel Aviv, which has five other locations in Warsaw alone, is a place you would take your business partner to dinner. At the weekends the place becomes a cosy eatery where a legendary breakfast buffet is served. An outside seating area makes the place even cooler during warm months.

A few meters from Tel Aviv you can find another fine dining venue, this time from Italy. Leonardo Verde, a 100 per cent vegan Italian restaurant has a huge pizza menu in addition to other Mediterranean vegan dishes. Leonardo Verde is the kind of place where you can take your loved one for a date or spot an ambassador accredited to Warsaw, throwing a dinner party for friends.

Again, a few hundred meters away from Leonardo Verde, on the opposite side of Poznańska, there is a real jewel on the Warsaw vegan map — Momencik Vegan Burritos and Tacos. This is the right place for every Mexican food lover: a few types of burritos and tacos (from “fake meat” to those more healthy ones), amazing sauces and other toppings. As the place is run by foreigners and most of the staff also comes from abroad, English is the first language here.

Since we’re just meters away from Hoża street, another legendary place on the Warsaw vegan foodie scene, let’s check Krowarzywa, the first ever outlet of what is now a world-famous Polish vegan burger chain. It’s the first place in Poland where you can get a Beyond Burger – a vegan burger that tastes like a real beef (so much so that many vegans simply refuse to eat it).

Another hundred meters down Hoża street you can enjoy Lokal Dela Krem, the first fully vegan bakery in Warsaw, serving cinnamon rolls, birthday cakes, apple pies and even ice cream – you name it. The place has recently begun serving awesome breakfasts at the weekends, including vegan omelettes, waffles, bagels and scrambled tofu.

Warsaw won’t disappoint you if you’re an Asian food lover. The Vegan Ramen Shop with its two branches on Finlandzka and Kazimierzowska streets have been voted best ramen in Warsaw, and I am not only referring to the vegan category. No reservations or take-away: the place is so popular that queuing up for a seat happens often.

And now the latest addition to Warsaw vegan culinary scene — Uki Green, located between Constitution Square (Plac Konstytucji) and the famous Hala Koszyki. This is a Japanese owned ramen place that also serves amazing side dishes like fake meat dumplings or Mabo Don rice with tofu.

Then there are the vegan sushi options — Edamame Vegan Sushi on Wilcza street or Youmiko Vegan Sushi on Hoża street. Both places serve delicious sets of sushi that will prove once and for all that vegan sushi is more than just an avocado roll.

I wonder if someone has counted how many vegan places there are in Warsaw now? I have explored a lot of them — even places like Zielona in the Arkadia shopping mall. I am quite sure there’s a lot more to try so I am looking forward to chairing another conference in Poland’s capital, now a veritable vegan paradise.