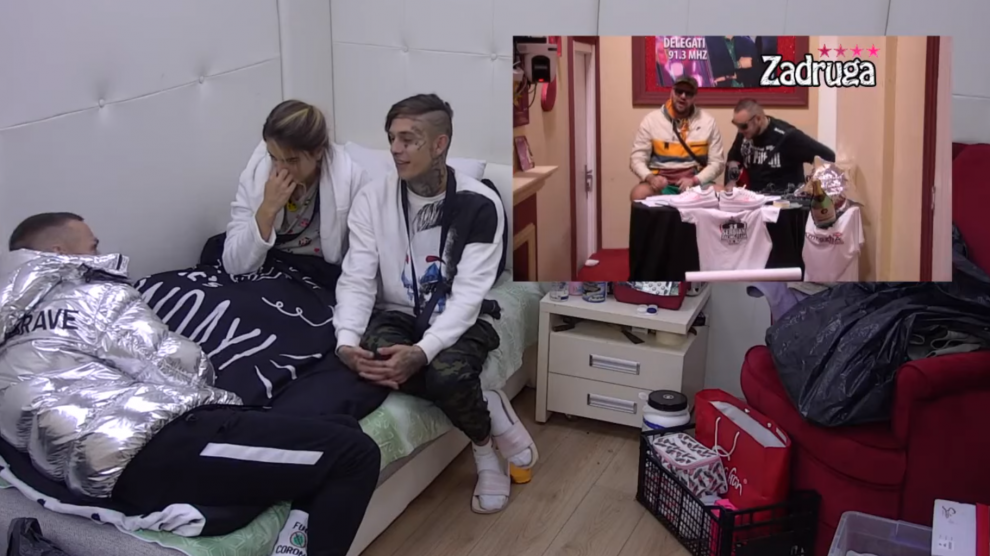 Reality TV in Serbia has taken a sinister turn.

“She left the White House! Banged on the gate, shouting, a brutal argument!” says a headline in the Serbian tabloid Informer.

No, this isn’t about Melania Trump, at least not yet. Instead, it concerns Monika Horvat, a contestant on the Serbian reality TV show Zadruga (in socialist times, a zadruga was an agricultural workers cooperative) and was the latest in a long line of daily psychological meltdowns that occur in the complex known as “The Imaginarium”.

Zadruga, shown on Pink TV, is one half of a pair of reality TV shows that rule the Serbian airwaves, the other being Parovi (Couples), aired on the Happy TV channel. Together, the two shows top the ratings and dominate the entertainment industry in the country.

Reality TV programming began innocently enough in Serbia with the first season of the Big Brother franchise in 2006. Over time however, the evolution of the genre in Serbia has diverged from the West, into something altogether different and more pernicious.

Of course, reality TV is massively exploitative even in the best of times. My 600lb Life, Embarrassing Fat Bodies, Here Comes Honey Boo Boo, are just some examples of the kind of trash that reality production companies traffic.

But even the most inveterate reality TV consumer in Britain or the United States would baulk at what goes on in Zadruga and Parovi.

High-pitched verbal arguments, oftentimes followed up with physical violence, make The Real Housewives look like a Chatham House debate. Of course, the production companies always “condemn” such violence, but there’s no doubt that this kind of thing is good for the ratings.

Ratings are also helped by the fact that these shows are on pretty much all day. Both Zadruga and Parovi have long ditched the episodic format and instead rely on hours of live transmissions. On Pink TV, according to the schedule for Friday November 13, Zadruga will be on from 11:40am to 1pm, then from 1:41pm to 2:55pm, and again from 3:31pm to 6:29pm. In the night slots, once a block of Turkish telenovelas ends, Zadruga is on from 10pm to 5am on Saturday morning. In conjunction, a “season” of Zadruga essentially runs year-long from September to July with only a month-long break in August.

Then of course, there is the constant deluge of headlines in online tabloids that form a kind of media synergy many a production company in the world would envy. And speaking of media synergy, over time reality shows in Serbia have swallowed up smaller scale reality concepts such as DNA paternity tests, and shows in which people answer embarrassing questions about their lives while hooked up to lie detectors.

It’s not just the vulgar fights and physical altercations that have raised eyebrows about reality TV in Serbia. The contestants have often been as controversial as the events of the shows themselves.

Washed-up celebrities are a common fixture of reality programming everywhere, and there are many of them in Zadruga and Parovi. But figures like starlet and “elite prostitute” Tijana Ajfon (pronounced iPhone) and convicted criminal Kristijan Golubović have caused many to reflect on what kind of behaviour and careers are being promoted in prime time TV slots.

Many commentators and analysts in Serbia have criticised these programmes for “promoting violence” and “corrupting the value system of the nation”. Some have even sought to ban them altogether, such as in a recent petition signed by more than 60,000 people seeking to end the programmes on TV networks with national broadcasting licenses.

Perhaps these concerns are easy to dismiss as a moral panic, and busybodies seeking to regulate somewhat controversial entertainment.

What can’t be dismissed as easily, however, is a serious allegation of abuse made by one former contestant of Parovi — Anđelina Nikolić – who says she was misled as to what would happen after she won offshoot reality show Novajlije (Newcomers). Nikolić was hoping for a job as a TV presenter, but instead she got to participate in the flagship programme Parovi.

According to her allegations, she wanted to quit Parovi after only three days, but this was not possible. Instead, she decided to try and get kicked off.

“I sit down, I take a soda can or a hairpin or anything sharp and simply — I start cutting myself. They let it happen, as the camera is above, they just bring it down and they look at it. And they they see I cut myself, that there’s blood. After ten minutes, security comes and takes me away to isolation,” she told the Serbian press.

At one point Nikolić says she drank a cleaning product, expecting to be taken to hospital to get her stomach pumped. Instead, she was just forced to throw up. She also alleges that she was given unknown sedatives and was sexually assaulted while being kept in isolation.

So far, the allegations have not had a resolution in court.

Cases of contestants running away from the shows common, although it remains questionable as to whether or not the escapes are real or simply publicity stunts. In the case of Zadruga, at least, tabloids have reported that those who run away would have to pay a 50,000 euros fine to the production company. It’s unknown whether any of them actually paid up.

Ironically, it’s now hard to know what’s real and what’s fake in a reality TV programme. But the concerns over the suitability of content such as this – shown throughout the day – are real. And with a notoriously limp media regulator, it’s unlikely any significant action will be taken soon.

The headline from the beginning of this article bears the subtitle, “She couldn’t bear the pressure that comes with reality”.