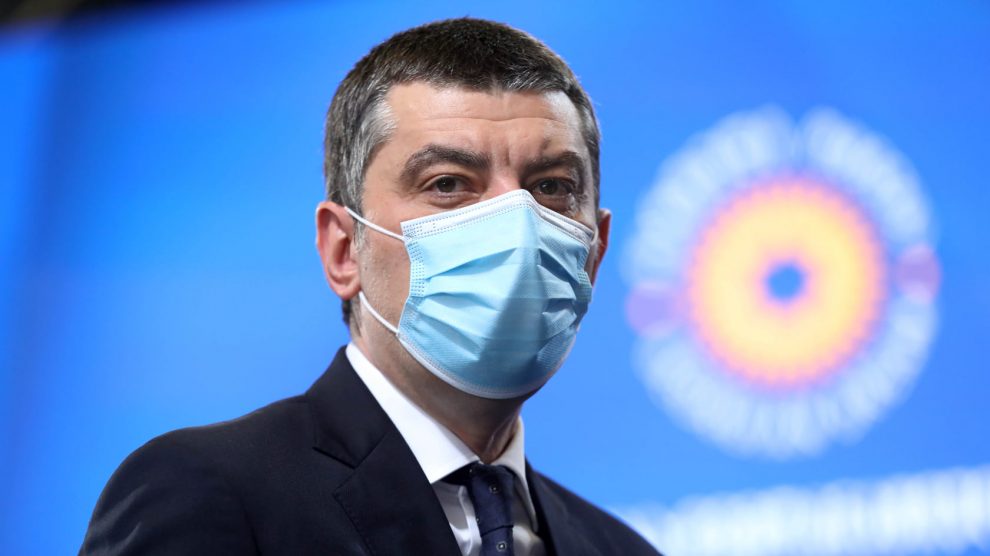 Georgia’s prime minister resigns, while a court rules that an opposition leader be placed in pre-trial detention.

Georgia’s prime minister resigned on February 18 following a court ruling that could see the head of the country’s main opposition party placed in pre-trial detention.

Giorgi Gakharia, who had been PM since September 2019, said in a statement that he was resigning due to disagreements with his own team over the treatment of opposition leader Nika Melia, the chairman of the United National Movement (UNM).

“Unfortunately, I could not make an agreement with the ruling party that now was not the right time [for Melia’s detention] and have decided to resign. I hope that my step will help to decrease polarisation and rivalry inside the country, which poses serious threats to Georgia’s future,” said Mr Gakharia in a statement.

The previous day, a court in the capital Tbilisi granted a request from prosecutors to place Mr Melia in preventive custody, on charges that the UNM and other opposition groups claim are politically motivated.

Mr Melia is accused of organising “violent mass protests” during demonstrations against the Georgian government in 2019. He faces up to nine years behind bars if convicted.

On February 16, Georgia’s parliament – dominated by Mr Gakharia’s Georgian Dream party – voted to suspend Mr Melia’s immunity from prosecution, paving the way for his pre-trial detention. He has not yet, however, been arrested. Shortly after Mr Gakgaria’s resignation, Georgian police announced that they had “postponed” Mr Melia’s detention.

“The minister of internal affairs has made a completely logical decision to temporarily postpone Mr Melia’s arrest process. Now our political team’s attention will be fully focused on the formation of a new government. We urge Mr Melia to obey the law. Otherwise, the government will ensure enforcement and arrest of the law,” said the Georgian Dream party in a statement.

Some have argued however that while postponing the arrest may defuse some of the tension and reduce the threat of street protests, not detaining Mr Melia despite a court order to do so – politically motivated as it may have been – only serves to demonstrate how blurred the lines in Georgia are between politics and justice.

“The irony certainly didn’t escape me that the PM resigned over disagreement within the ruling party on what to do with the opposition leader, a decision supposedly made by the independent judiciary,” says Giorgi Gogia, an associate director at Human Rights Watch.

Georgian Dream comfortably won a parliamentary election in 2020, taking 90 seats in Georgia’s 150-seat legislature. However, despite the Organisation for Security and Co-operation in Europe (OSCE) saying that the election had been “competitive” and that fundamental freedoms had “generally” been respected, the opposition has disputed the results and has boycotted parliamentary sessions.

The OSCE did, however, report allegations of pressure on voters and that the blurring of the line between party and state reduced public confidence in parts of the process.

Ahead of the court decision, the European Union’s envoy to Georgia, Carl Hartzell, described the circumstances surrounding Melia’s prosecution as a “dangerous trajectory for Georgia and for Georgian democracy”.

Hartzell said the case will definitely have a “wider impact” on the political landscape and on further developments in the country.

Just last week, its latest report on the implementation of the EU-Georgia Association Agreement, the EU called on Georgia to speed up judicial reform and do more to tackle political polarisation.

The report said that the political situation which has followed 2020’s elections, and which has seen the country’s opposition boycott sessions of parliament, demonstrates the need for further democratic consolidation.

“It is of vital importance that all Georgian political parties act within the institutional framework to find common ground and a way forward,” said the EU’s foreign policy chief Josep Borrell.

The United States has also condemned the court decision.

“We call on the authorities and the opposition to exercise maximum restraint in the wake of [this] ruling. Violence serves no one except those who want to undermine Georgia’s stability. This must be resolved peacefully,” tweeted the US Embassy in Tbilisi.

“Arresting and detaining Melia will inflame an already tense situation and further delay negotiations to enable a multiparty parliament. The government must defuse the situation and restart those negotiations,” added the former US Ambassador to Georgia, Ian Kelly.

The PM’s resignation means that his cabinet is also suspended with immediate effect. Parliament will have to approve a new PM and cabinet within two weeks. Should it fail to do so, the country’s president, Salome Zurabashvili will dismiss parliament and call a snap election.