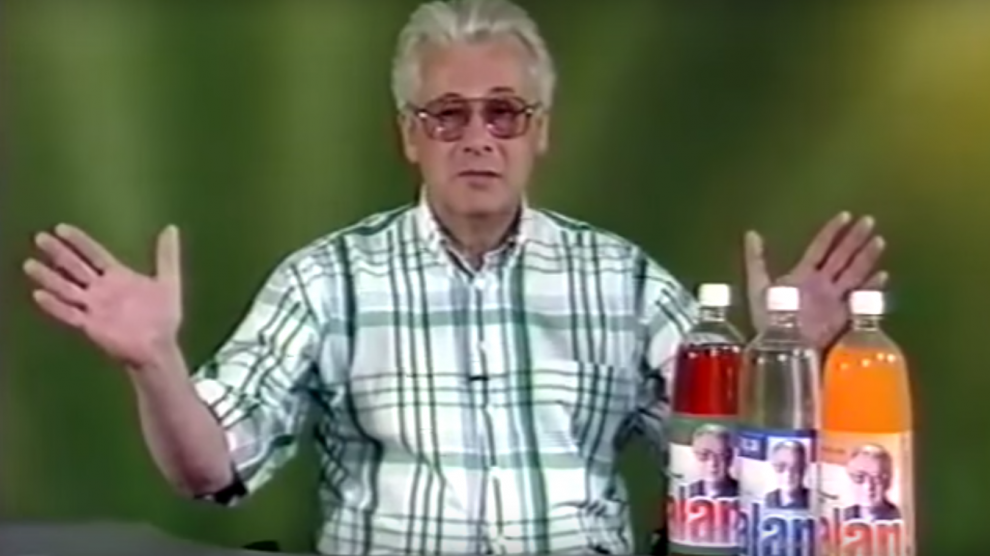 From Vlach magic to Kleopatra, Serbia in the 1990s was a great place to be a charlatan. Or was it all just performance art?

Daytime television in Serbia is today dominated by much the same fare as in the rest of the world: kitsch talk shows, reality programmes, infomercials.

But in the 1990s it was a very different story. Back then, the daytime (and at times, the prime-time) airwaves were the site of a strange phenomenon that took the country (and to an extent, the entire Western Balkans region) by storm — a slew of televised oracles and prophets offering succour to masses traumatised firstly by the early signs of the dissolution of the ailing socialist system, then the war, and then its aftermath.

It’s hard to say exactly how it all began, as divination and the occult have had a long tradition in region, well before there was such as thing as television.

Notable figures in the pre-television era include Miloš and Mitar Tarabić, two illiterate peasants from the village of Kremna, who produced what is today known as the Kremna Prophecy which purports to reveal the course of history over the next few hundred years. A sort of Serbian answer to the ramblings of Nostradamus, the Kremna Prophecy is still widely read today and its adherents claim the Tarabićs have predicted the World War I, the current European migrant crisis, and the invention of the television.

Then there was Baba Vanga (baba is Serbian for “grandma”), a Bulgarian-born blind seer credited with foretelling the date of Stalin’s death, the fall of the USSR, and the 9/11 terrorist attacks. By the time of her death in 1996, Baba Vanga’s counsel was sought by such figures as the Bulgarian Tsar Boris III and the Soviet leader Leonid Brezhnev.

The Kremna Prophecy, along with the many works of Baba Vanga, remain popular today in the Western Balkans and in Russia, where devotees are still actively deciphering them.

Folk practices relating to magic, divination, and curses are much much older than any specific practitioner. In Serbia, the most famous and most commonly practiced magic system is Vlach magic. A centuries-old practice connected to the ethnic Vlachs (also known as Wallachians), the eastern Romance-speaking peoples who today live in eastern Serbia. While most follow Orthodox Christianity, the relative isolation of mountainous eastern Serbia has allowed for many pre-Christian rituals and customs to be preserved into modern times.

For centuries, local people would seek the aid of Vlach women versed in magic, divination, and curses — both their casting and their removal. Most anything can be the subject of a curse in the Vlach magic system — people, animals, and places are all equally in danger of being the victims of occult shenanigans. Luckily, through the practice called bajanje, a series of incantations performed in the Vlach language, the majority of these curses can be safely lifted.

Still, despite the fact The Kremna Prophecy and Baba Vanga still have many fans, and that practitioners of Vlach magic are not wanting for clients, the allure of divination and magic has mostly gone from the mainstream.

Back in the 1990s however, divination and magic were dynamite stuff, bringing in a viewership share that would shame many of today’s most popular shows.

The ground zero for what would become a decade-long obsession was a certain Allan Chumak (pictured above), a Russian distance healer — and all around quack — who made a name for himself in the late 1980s in his native land before coming to Yugoslavia, where he would become a true sensation.

Picture the scene: it’s 1990, just a year before the Yugoslav War would break out, and there is a feeling in the air that something is not quite right. Viewers across Yugoslavia are tuning into the Serbian state broadcaster’s Jutarnji Program, a morning television show. The sound stage manages that classic Soviet feat of looking at the same time ostentatious and run down.

The longtime presenter Bane Vukašinović is about to introduce Allan Chumak to Yugoslavia as a long distance bioenergetic healer capable of curing ailments by sending his energy over the airwaves.

As Chumak begins explaining how it all works, he instructs viewers, through his translator Branko Petković of Radio TV Revija (Radio TV Review, a variety magazine), to lift up their hands and feel the energetic connection. Diseases would be cured, and even the air in the room would be replaced, taking away cigarette smoke and kitchen smells.

Some time later, Radio TV Revija, incidentally Chumak’s host in Yugoslavia, would print his picture and instruct readers to cut it out and paste it to any ailing part of their body.

“Allan, I am scared,” Vukašinović says jokingly at one point of the TV seance, and he wasn’t that far off the mark. Chumak’s performance would open the proverbial floodgates to many other healers, diviners, and practitioners of various forms of magic, who would in the following years loom over the TV landscape as its biggest stars.

Many such individuals would circulate on TV stations both regional and national, with the private station TV Pink serving as something of a hub through which many different clairvoyants and diviners have passed.

The “famous white mage” Lav Geršman (a Ukrainian who came to Serbia in 1991) would rise from the bunch and thanks to his charisma become a constant media fixture on television and in print offering his takes and prognoses on politics and society. His fans credit him for predicting the date that NATO would begin its bombing campaign against Serbia, but this is disputed.

Business was never far from the whole phenomenon, and the call-in live shows served mostly as an advert for much costlier private seances.

Of all the different prophets however, one rose to the highest prominence to become, in her own words, the “Balkan prophetess, crowned queen among prophets” — Kleopatra.

Taking her stage name from the famed Egyptian queen, Kleopatra would emerge as a true star of the whole televised occultism trend.

For years in the 1990s, her home would be TV Pink, where she would take calls and answer letters. But interestingly, Kleoptra’s approach relied not on ritual or divination paraphernalia but on her own strong, and often controversial, opinions.

Kleopatra did not mince her words. A far cry from a contemporary new age life coach and affirmation peddler, she didn’t see her job as making people feel good. She would often rake people over the coals for what she perceived as their moral failings. At one point she told an emigrant husband unsatisfied with his wife to bring her over to Serbia and start beating her as soon as they cross the border.

Another time, she told a woman whose behaviour particularly incensed her, that she “doesn’t have the right to pray to God” and must “fast for the next 10 to 15 years.”

Her brand of tough love mysticism made Kleoptra first a star and then a meme. Even today, clips of her show are shared on the Serbian-speaking internet.

While she never recaptured the glory of the 1990s, Kleoptra remains a B-list celebrity to this day. Most recently, she opened up about what has been a public secret from the start, the fact that she is actually a transgender woman.

In the late 2000s, the last of the famous occultists would emerge: Milan Tarot, the subject of the award-winning documentary Tarot Serbia. In his The Eighteenth Brumaire of Louis Bonaparte Karl Marx wrote that all great historical persons and events appear twice — first as tragedy and then as farce. Milan Tarot is the embodiment of this idea, as his antics went well above the first crop of TV diviners.

Ever since his debut, Milan would push the boundaries of both tarot reading and good taste. In a YouTube clip collection titled “Top 5 – Milan Tarot Best Bits” Milan can be seen telling his caller to repeat six times the phrase “I am Tarzan, lord of the jungle” before taking two eggs to crack over their head.

Debates are ongoing as to whether Milan Tarot was ever sincere in what he did, or if the entire thing is an elaborate performance art piece. If it is indeed a performance, it’s been a long and strange one.

But, like all stars, the TV prophets essentially burned out. Following the fall of Slobodan Milošević in 2000, the new democratic government wanted to get them off the air fast.

Televised soothsaying just didn’t fit into the concept of a new and modern Serbia. Over time, laws would be made to limit and then ban them from national television. Some migrated to local and regional media, but were then ousted from there too, seeking refuge on mostly Hungarian-based satellite TV stations serving the Western Balkans region.

Over time, public interested waned too. But never completely, as many of those once prognosticating on TV are now scheduling seances over Facebook and Instagram. One never needs to seek too hard to find a person willing to offer spiritual guidance in exchange for some money.

Looking at the whole phenomenon today, it’s easy to laugh and ascribe it all to the “crazy 1990s.” However, an episode from the 2010 documentary Tarot Srbija remains instructive: in it we see a middle aged person, deep in debt, coming to a private session with Milan Tarot, hoping that he would be able to give them a set of lucky lottery numbers.

There is an unproven theory that in Serbia, during the peak of the TV prophet trend – the Slobodan Milošević years – it was actively promoted as a means of pacifying the populace. But the same was said of turbo folk too.

However, in 1996, the eve of a parliamentary election saw a new party formed. The Party of Natural Law, known better as the Party of Yogic Flying, promised the people of rump Yugoslavia a perfect society, full employment, group levitation, and an integrated national consciousness.

It was widely understood to be a manufactured opposition party aimed at confusing voters, but that didn’t stop its members from appearing on national television.

The 1990s were – it is no secret – not the best of times for the Western Balkans. As a civil war raged on, the economic situation was dire. In 1993, Yugoslavia (then really just Serbia and Montenegro) saw massive hyperinflation.

With an uncertain present, and an even more uncertain future, is it really so surprising that many people would turn to the spiritual and the occult as ways to make sense of a world that had stopped making sense?

In such a world, charlatans and quacks are never far behind.