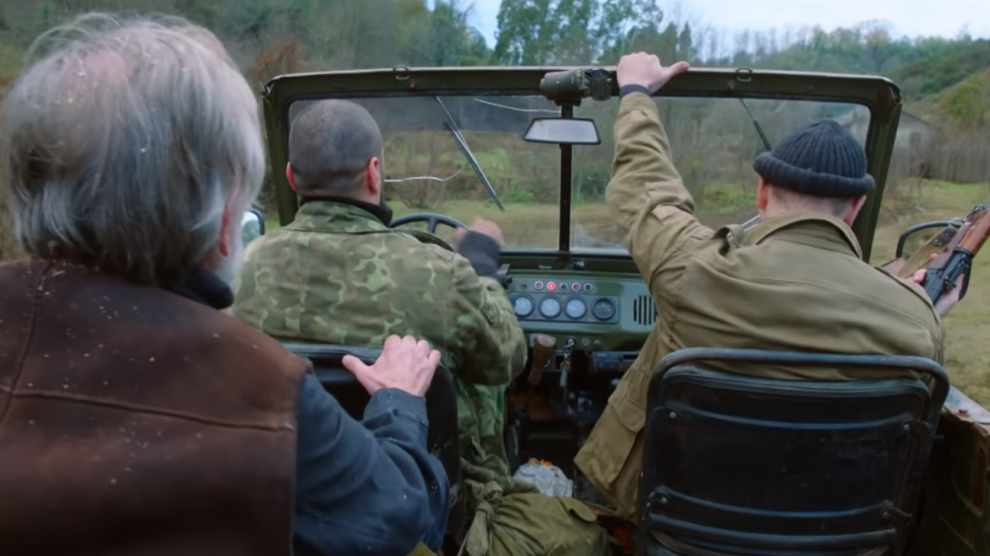 Set during a bitter conflict in the early 1990s between Georgia and Russia-backed Abkhazian separatists, Tangerines has a message as pertinent today as ever: that ethnic nationalism is a dead end.

Tangerines, the most widely-acclaimed post-independence Georgian film is a poignant tale of solidarity and humanity in the inhumane circumstances of the Abkhazian War.

A joint Estonian-Georgian production, and directed by Zaza Urushadze, the film manages to showcase the myriad peoples living in the Caucasus and the importance of cross-cultural cooperation in such diverse locations.

Tangerines opens by introducing us to Ivo – a tough, wiry old carpenter. He is an ethnic Estonian – part of a centuries-old community of Baltic peoples living in Abkhazia, a region of Georgia. His village, which the film implies had been mostly composed of other Estonians, is depopulated following the outbreak of the war, with just Ivo and his tangerine farmer neighbour Margus left.

Estonians have been living in Abkhazia since the Russian Empire consolidated its control over the region in the late 19th century. When fighting broke out in 1992 between Georgian government forces and Russia-backed Abkhaz separatist forces, most headed for their ancestral homeland.

Early in the film, two Chechens, fighting on the Abkhazian side, visit Ivo and ask (or rather demand) the old Estonian give them some food.

Ivo obliges, but shortly after sending the Chechens on their way, they are ambushed by a Georgian column. In the ensuing firefight, one of the Chechens, named Ahmed, and one Georgian, named Nika, survive. Both are taken in and cared for by Ivo.

The two wounded men from opposing sides despise each other initially. Ahmed vows to kill Nika to avenge a comrade. Out of respect for Ivo (both because of his age, and because he saved Ahmed’s life), Ahmed promises not to attempt to kill Nika until they are both outside Ivo’s house.

From here it’s easy to guess the plot: Ahmed and Nika, initially consumed by ethnic and personal hatred come to find their common humanity under the supervision of the wily Ivo. This straightforwardness doesn’t detract from the power of the message: that we are all more alike than we are different.

There are only four characters in Tangerines with any significant screentime. This gives the film ample room for dialogue-driven character development and to explore the weighty themes contained within, despite running at less than one and a half hours.

Ahmed initially finds it hard to make peace with the fact that Nika played a role in his friend’s death – this is entirely understandable. Likewise, Nika struggles to reconcile the fact that Ahmed had come from abroad to help a separatist movement fight against his own country.

Both have powerful reasons to hate each other. However, this hate dissipates, to an extent, when they have to sit and eat with each other, as equals. On the modern battlefield, your enemies become faceless monsters shooting at your from hundred of metres away and killing your friends and comrades. You abstract your enemy, associating them with everything evil.

Coming face to face with your enemy requires one to confront the fact that they are in fact regular people, with families, a sense of honour and decency. That in other circumstances, the two of you could become neighbours or friends.

This is a pertinent message given the context in which the Abkhazian War fought.

In the final years of the Soviet Union, things were changing faster than people could keep up. Driven by the uncertainty, ethno-nationalist movements popped up in every corner of the vast union. People clung to their newfound ethnic identity, long sidelined under communism, to provide them a sense of security and community against the tide of unnerving changes their societies were going through.

As shown throughout history, ethnic nationalism is a dead end. Ugly, destructive conflicts based on politics of identity broke out throughout the former Soviet world. Peoples who had lived side by side were at each others’ throats – literally. The Abkhazian War was characterised by horrendous atrocities carried out by both sides. Some 250,000 ethnic Georgians were displaced during the war. Tens of thousands of civilians of all ethnicities died.

Tangerines carries an important message. The four men, representing three different ethnicities bond over their common humanity. Ethnic and cultural differences are relegated from insurmountable obstacles to trivialities one can joke about. Ahmed ranting about how Georgians, despite thinking otherwise, are bad at grilling shashlyk is particularly funny.

Tangerines was nominated for best foreign language film at the 2014 Oscars and won 11 prizes at various international film festivals. It is almost certainly the best-known post-independence Georgian film. Dialogue is in Estonian and Russian, and all actors are either Estonian or Georgian.

Director Zaza Urushbadze sadly died of a heart attack in 2019. However, he managed to leave behind a poignant work that enshrines pacifism, solidarity and respect above the mire of hatred and exclusivity.

Tangerines is available in the UK on Amazon Prime.

The installation placing Lithuania’s old cinemas in the spotlight
A Slovenian start-up is creating the perfect steak. And it’s meat free
Comment