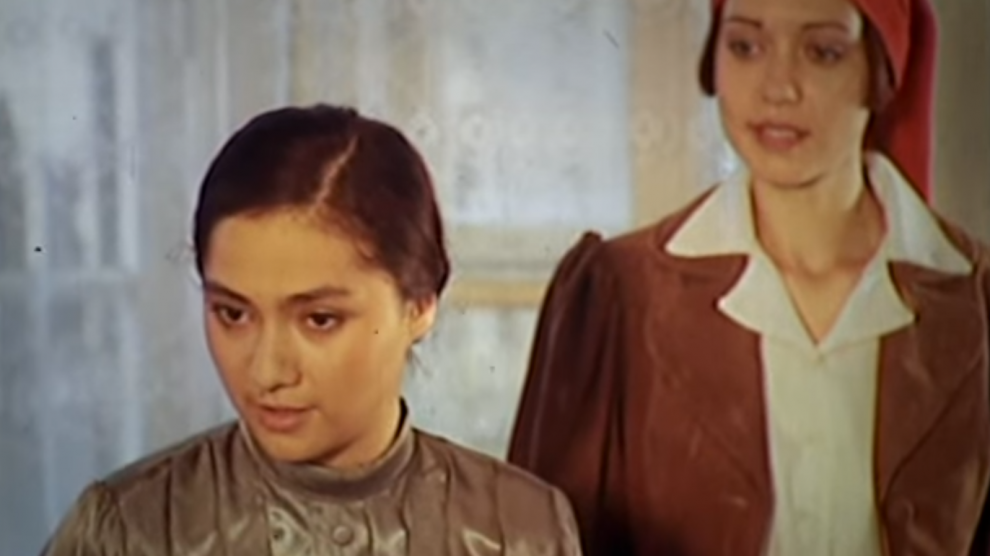 The Orator, the full-length debut of director Yusup Razykov, succinctly and objectively captures the profound societal changes which communism brought on Uzbek society. Released in 1999, it is among the most important moments in independent Uzbekistan’s cinema history and displays the tension between reform and tradition.

Yusup Razykov’s The Orator opens with the main character, Iskander, coming home with his newly-married wife, to see that his brother has fallen ill. The brother passes away, and according to Sharia law, his possessions – his cart, horse, house and his wives – are passed on to Iskander.

Iskander is a kindly man and treats his three new wives with respect. Early in the film, Russian communists shelter in his house, on the run from counter-revolutionaries and commandeer his horse, promising to remember his contribution to the cause. A train then passes by and its loud horn blaring noise into the quiet neighbourhood Iskander and his wives live in – perhaps a metaphor for the relentless march of social progress clashing with age-old traditions.

The film then cuts to various black and white images from the era – 1920s and 1930s Uzbekistan, as Soviet rule was being established and socialist values brought to the population. Images of women huddled together, covered from head to toe in burqas contrast against images of working women, marching in unison, unveiled.

Since 1876, the full territory of modern-day Uzbekistan had been part of the Russian Empire. In those years, it was little more than a colony and Tsarist officials did little to uproot traditional orders and customs in the interest of stability. It was not until the Russian Revolution of 1917 and the subsequent establishment of the Soviet Union that Uzbek society begin undergoing widespread changes.

This era was defined by a campaign known as khudzhum – when the newly-established communist government underwent massive efforts to change the status of women in the highly traditional societies of Central Asia. Until then, polygamy and bride abduction were common. Girls were married off at very young ages – Iskander’s first wife in the film looks barely a teenager. Furthermore, virtually all women were illiterate.

The Soviet government, from the mid-1920s, began establishing women’s departments – zhenotdel in Russian – which taught women hygiene, childcare and advised them on legal issues, such as the newly-established right to divorce.

The era also saw a campaign against the burqa. Women were encouraged to burn their burqas, as the communists branded them as symbols of their oppression. On March 8, 1927, in celebration of International Women’s Day (itself an invention of international socialist parties), up to 10,000 Uzbek women burnt their burqas in Samarkand. However, these changes, however emancipatory they may be, inevitably ran into resistance among the population – not only among the men who wished to preserve their privileged status, but also among the women subjected to the stifling customs.

The Orator captures the spirit and the conflicts which defined this era of mass social change. Maryam, a zealous young Uzbek communist party official is introduced giving a speech, which culminates in her removing her burqa and tossing it in a fire, much to the horror of her all-female audience. Later on, when travelling to a village, Maryam is confronted by a group of men who tell her that the women in their village would not shame themselves the way she had. One of the men tries to kill her with a hidden dagger.

Between 1927 and 1928, more than 2,500 members of women’s departments, literacy clubs and libraries were murdered in Soviet Uzbekistan alone – often by husbands or family members.

The Orator also shows how even in happy traditional families, like that of Iskander, the uneven power dynamics remain. Iskander’s wives all call him ‘master’ instead of his real name. In one scene, he is literally bathed and massaged by his three wives. His relationship with them seems dutiful and courteous, but not exactly romantic –  in stark contrast to how Iskander falls in love with Maryam later in the film.  Although Iskander is a kind and gentle man, The Orator shows how in such arrangements, the girls are entirely at the mercy of their husband.

All of this raises some uncomfortable conclusions, particularly for western liberals. There is the fact that much anti-communism, particularly within the former Soviet Union, was rooted in reactionary pushback to rapid social progress, or narrow-minded ethnic nationalism.

However, it also demonstrates how sometimes, inorganically forcing this kind of modernisation onto a society before it is ready can have the opposite effect. Towards the end of the film, Maryam writes to Moscow that the “liberation of women campaign clashes with Islamic and traditional customs”.

The film is currently available to watch in full (albeit in not the finest resolution) on YouTube, complete with English subtitles.