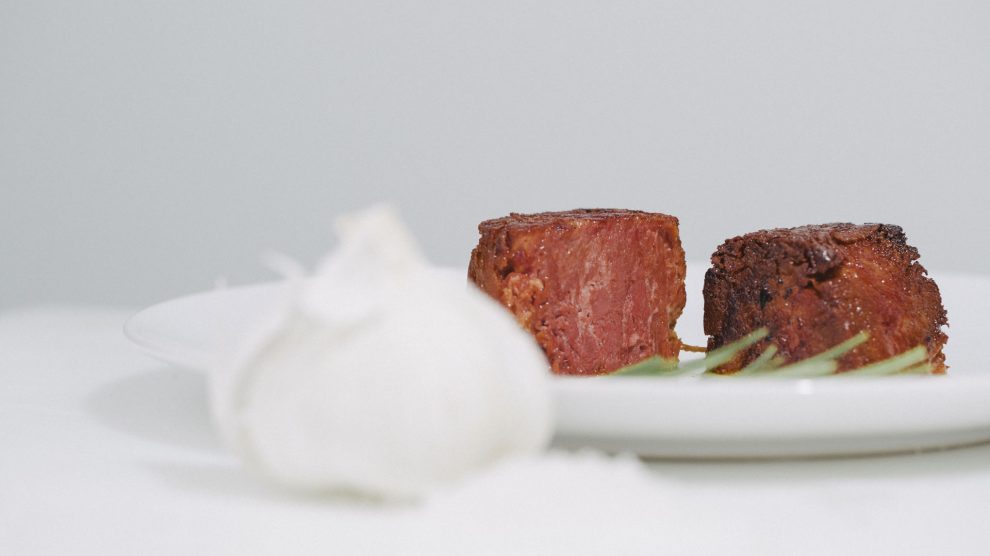 A Slovenian start-up is taking a radical approach to plant-based, meat-like products. Instead of creating burgers and ‘chicken’ nuggets, they have developed a filet mignon that is every bit as juicy and tasty as beef.

As environmental concerns climb to the top of everyone’s priority list, animal agriculture has been identified as one of the primary drivers of anthropogenic climate change.

There isn’t a single environmental organisation that isn’t currently calling for a reduction in meat consumption as a way to fight climate change. Unfortunately, far too many people still love meat too much to give it up. Meat consumption remains at a historical high in most of the developed and emerging world.

But what if there was another way? A way to enjoy the flavour and texture of meat, while drastically lowering greenhouse gas emissions while also not harming any animals?

A Slovenian start-up, Juicy Marbles, might just have found the answer.

The firm has joined the growing movement of plant-based meat analogues, such as Beyond Meat and Incredible Burger, that aim to reduce meat consumption by offering meat-like products made from plant protein.

“The experience of meat is amazing, obviously, it’s easy to make. You sprinkle a little salt and you have good, juicy protein on your plate,” Vladimir Mićković, the chief branding officer at Juicy Marbles, tells Emerging Europe.

“Meat analogues enable a transition to a plant-based diet that doesn’t require a lot of behavioural changes or learning a lot of new recipes.”

Where Juicy Marbles differs from similar firms is that the team behind the start-up has decided not to focus on burger patties and chicken nuggets, but instead tackle what Mr Mićković calls a bigger challenge.

“The market for the plant-based patties is very saturated. Also, minced meat wasn’t enough of a challenge so we started tinkering with different techniques, trying to attain the texture of a steak,” he explains.

The start-up’s three co-founders, Tilen Travnik, Luka Sincek, and Maj Hrovat, all have a background in food and biotechnology.

And they might just have cracked it, using a machine they have dubbed the Meat-o-Matic Reverse Grinder 9000, which mimics muscle texture by layering soy protein into linear fibres.

The company says it is a simple and 100 per cent physical process that uses natural ingredients.

The technology is still patent-pending, but in broad strokes, it’s a machine that lets the start-up layer plant protein into the direction of muscles and lets them add colour and the marbling of fat.

This should solve the problem of scaling production that plagues meat analogues made by 3D printers or which are grown from cells in a lab.

When it comes to the taste, Mr Mićković is quick to point out that what the firm is doing is not a “copy-paste” version of meat. Instead, the company calls it an “original masterpiece”.

“It’s very close to meat but we would never dare say it’s a copy-paste version. No meat is exactly alike. What we’re trying to do is take the main properties of meat that we like, and improve the rest,” he explains.

Right now, the steaks being sold as a test drive before the official launch this autumn are somewhat pricey (around 80 US dollars for two cuts of filet mignon), but that will change soon.

“That was actually our desperate attempt to stop sales,” Mr Mićković says. “We’re very small scale so we were immediately selling out and all we did was torture our little prototype machine 24/7 and barely fulfilled the demand.”

Juicy Marbles is focusing on more research and development at the moment, but Mr Mićković notes that price parity with meat is a goal of the company within a year of the official launch. He also hopes that within two years, Juicy Marbles could actually beat the price of standard meat.

“We want to make luxurious, Wagyu-like, marbled pieces of meat affordable for everybody,” he says.

In keeping with its radical approach, the firm’s advertising is no-nonsense, tongue-in-cheek and doesn’t shy away from profanity: dropping the occasional F-bomb in marketing copy is all part of building the brand.

“We try to talk as we talk. All of us in the company made a conscious decision that we want the brand to be more like us  — and just try to be chill. You know, stay away from too many slogans and just talk like a f*cking human being,” says Mićković.

This kind of off-the-cuff communication style could well be a sound way of navigating a dietary space that has become increasingly politicised in recent years. Not consuming animal flesh, veganism, has become an identity. An identity that some people are firmly against.

Mićković tells Emerging Europe about a tasting event at his previous, plant-based restaurant when a group of meat-eaters were clearly enjoying the plant-based products very much.

“You could tell they were really enjoying it – it wasn’t fake,” he says. “And then one guy looks at me and says, this is really, really good, you know … but it isn’t for me.”

“There’s a lot of prejudice obviously, partially aimed at the ingredients themselves, partially at the lifestyle, because as humans we tend to see stuff as zero or one, people have a specific image of what it means to be vegan.”

And Juicy Marbles is aware of this. As Mr Mićković explains, one of the first things the company did was write out a list of all the possible prejudices that people might have, all the ways in which someone might come out against the idea.

Soy, of course, has become quite contentious in certain circles. Especially in the so-called manosphere, a loose network of men’s rights activists, alt-right trolls, and just plain trolls who have taken to insulting their targets with the all-purpose rejoinder — “soyboy”.

It trades on a discredited idea that soy intake, through plant phytoestrogen, can lower testosterone levels and even lead to the formation of dreaded manboobs.

In February, the company hit out at this idea in a humorous blog post that relayed the actual history and utility of soy beans.

It’s this kind of humorous approach that the start-up hopes will bridge the gap between meat-eaters and vegans.

“Comedy and laughter are a type of play, and playing transcends cultural barriers, it even transcends species, as even animals understand the language of play. With the tool of comedy we hope to etch a little bit of prejudice away,” Mr Mićković explains.

Interestingly, the firm is not setting out to create a new wave of vegans, at least not right from the start.

“I think it’s important to communicate realistic goals. Switching diets completely is like changing your entire molecular composition. I’d be happy with seeing people eat 90 per cent plant-based, even for their own health,” says Mr Mićković.

Still, he, and the company, believe that meat analogues such as Juicy Marbles will be able to help in the fight against climate change, and also allow for a simpler and easier transition to a plant-based diet.

“What all of us in the team have in common is a shared concern for the environment. We are not just creating a juicy alternative to meat but also presenting it in a way we find unifying for meat eaters and vegans alike, united under the same common goal.

“The idea is also to be inclusive in our communication and hopefully bridge the gap between two camps that have trouble reaching common ground, despite literally having the ‘most common’ ground – a desire to live on a habitable planet.”

Tangerines: Anti-war storytelling at its finest
Our Man in Warszawa: How the West Misread Poland
Comment