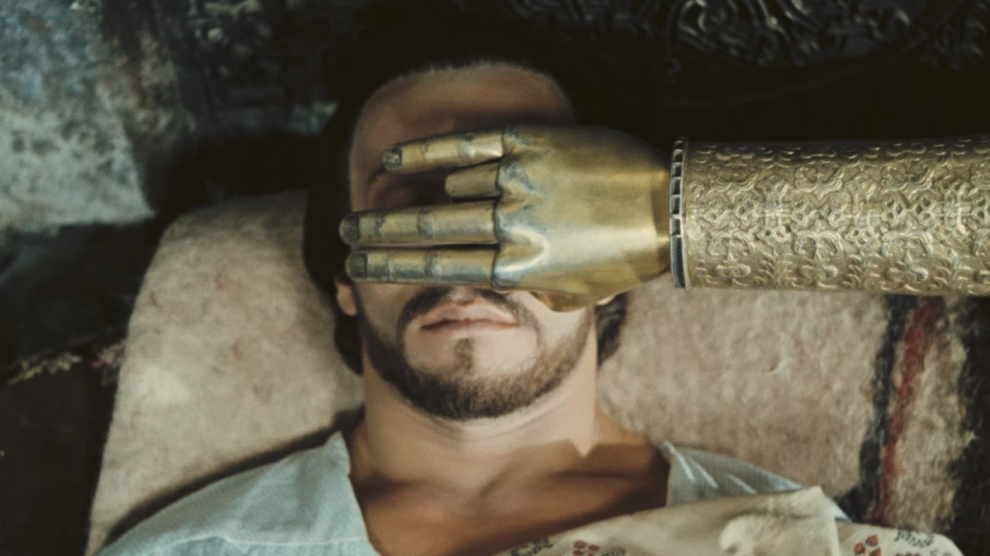 Imprisoned twice on spurious charges by the Soviet authorities, Sergey Parajanov – claimed by both Armenia and Georgia – nevertheless managed to create one of the most remarkable films ever to emerge from the Soviet Union.

I am the man whose life and soul are torture.

While it follows a chronological narrative, portraying various stages of Sayat-Nova’s life in order, there is little plot to speak of and virtually no dialogue. Instead, the film functions as a poetic visualisation of Sayat-Nova’s life, rife with strong, evocative and abstract imagery and motifs.

The camera does not move at all, giving the impression that you are looking at a moving painting, and the colours and costumes are magnificent. The result is a piece of art which truly looks like it has come from another world. Or at least an unimaginably different era.

The Colour of Pomegranates is Parajanov’s best-known film. However, it was not well-received upon release. Parajanov, who lived his entire life during the Soviet era, was exiled from official artistic circles multiple times and frustrated government officials who sanctioned the production of his films. He was jailed twice on spurious charges which included rape, homosexuality and distribution of pornography and his films only began getting national and international prominence towards the end of his life, in the 1980s.

Today, he is considered one of the finest artists produced in the Soviet Union and one of the greatest masters of cinema. There are two museums dedicated to him, one in his hometown of Tbilisi and the other in Yerevan, the capital of his ancestral homeland. The Parajanov-Vartanov Institute in Hollywood was also established in 2010 to preserve and promote his legacy, along with fellow Armenian-Soviet director Mikhail Vartanov. While late, this is the reverence such a remarkable director deserves.

An Armenian in Tbilisi

Sergey Parajanov was born into an ethnically Armenian family in 1924, in Tbilisi. Influenced by his artistic parents, in 1945 he enrolled in the prestigious VGIK in Moscow, one of the world’s oldest film schools. In 1948, he found himself in his first run-in with the law, when he was jailed for five years for homosexual acts. Friends and family question the veracity of the charges, with some believing that it was retaliation for his outspoken views. In any case, he was pardoned after three months.

Parajanov left Moscow and moved to Kyiv, where during the 1950s he produced a number of films in the state-sanctioned ‘Soviet realism’ style. Parajanov suffered under the restrictiveness of the style, however, and later disowned the films he made during the period.

The turning point in Parajanov’s career came in 1962. He was inspired by Ivan’s Childhood, the debut film of another legendary Soviet filmmaker, Andrey Tarkovsky. Ivan’s Childhood, taking place during World War II, broke from the traditions of Soviet realism, using surreal and dreamlike techniques to make a film that truly stood out in the era. These had a heavy imprint on Parajanov’s later style.

In 1965, Parajanov released the Ukrainian-language Shadows of Forgotten Ancestors, the first film of his which he truly claims as his own. The film is a hallucinatory, almost psychedelic Romeo and Juliet story taking place in the 19th century Carpathian mountains. Upon release, Parajanov caught flak both from authorities and from Ukrainian cultural purists. He butted heads with the former over his refusal to have the film dubbed into Russian, a common practice at the time. The latter were offended by Parajanov’s surreal depiction of Ukrainian culture, feeling as though it diminished the culture itself.

Nevertheless, Shadows of Forgotten Ancestors had respectable viewing attendances throughout the Soviet Union and the Soviet press reviews were more often positive than not. The film put Parajanov on the artistic world’s map and even got some international attention.

The Colour of Pomegranatestook Parajanov’s style to its completion. The film is even more surreal, more psychedelic and more colourful than the previous. The film depicts a beguiling, profound imagery that truly sticks in the viewer’s mind. While the meaning of many of the symbols and motifs will be indecipherable to all but experts in Armenian history, the poetry of the cinematography is simultaneously abstract and personal, making it possible for anyone to at least feel something.

It is a pinnacle of visual filmmaking – approaching film as a way to portray evocative images rather than simply a tool to tell narratives. The result is simply enchanting.

The film was an even bigger departure from Soviet realism than Shadows. And again, Parajanov caught flak from both Armenian nationalists and from Soviet authorities. The former repeated the criticisms of their Ukrainian counterparts, that the surrealist approach to narrating Sayat-Nova’s life did not show sufficient respect to the culture depicted and to the man who the film is about.

Soviet authorities were frustrated for different reasons. Sayat-Nova was a revered figure in the Soviet Union. His composition of songs and poetry in Armenian, Georgian and Azerbaijani made him relatable throughout the Caucasus, and a symbol of trans-ethnic solidarity, a pillar of Soviet rule. Authorities were hoping that the film they sanctioned Parajanov to make would show this in a clear way, and in the process promote the narrative of co-existence. When they instead got a near-indecipherable abstract film, they were annoyed.

Furthermore, some Armenian nationalist elements are present in the film. One of the opening shots shows three pomegranates, out of which red juice pours onto a canvas. The juice eventually forms the shape of ancient Armenia (or Greater Armenia), when the kingdom’s territory spanned across modern day Georgia, Azerbaijan, Turkey, Syria, Lebanon, Iraq and Iran.

The portrayal of the death of Sayat-Nova – killed by a marauding Persian army for refusing to convert to Islam – can be interpreted to show Parajanov’s aversion to and fear of Islam. Some claim this aversion was born – or strengthened – when his first wife, a Volga Tatar was murdered by her relatives for converting to Orthodox Christianity. The Soviets were wary of allowing historical, ethnic or religious grudges to come to the fore in the diverse multi-ethnic state.

Finally, Soviet authorities were frustrated by the obtuse, abstract style of the film being unintelligible to the masses. They branded the film as a kind of bourgeois obscurantism, a deliberate effort to distance art from the people and reinforce its long-held status as an ‘elite’ activity.

Following the release of The Colour of Pomegranates, Parajanov’s star faded. In 1973, he was imprisoned again for five years – this time for the rape of a male communist party member and distribution of pornography. Again, friends and family dispute the charges as politically motivated. Artists, directors and creatives from all over the world, including Tarkovsky, Godard and Fellini all petitioned for Parajanov’s release.

He was released one year early, but continued to be banned from filmmaking. This eased with the advent of perestroika and in the 1980s Parajanov managed to direct two more full films: The Legend of Suram Fortress, in Georgian, and Ashik Kerib, in Azeri. He died at the age of 66 in 1990.

Parajanov leaves a legacy like few others. While he stands shoulder to shoulder with a long line of remarkable artists, writers and musicians produced by the Soviet Union, his works are unlike virtually anything in world cinema, let alone Soviet cinema.

The Colour of Pomegranates is a film like no other and influences culture around the world to this day. Music videos by the likes of Lady Gaga pay homage to the distinct and beautiful style of the film. Both Georgians and Armenians claim him – and both have every right to. In Parajanov and his art, we can see a microcosm of his region – diverse and cosmopolitan with a strong urge for expressive freedom in the face of oppression.