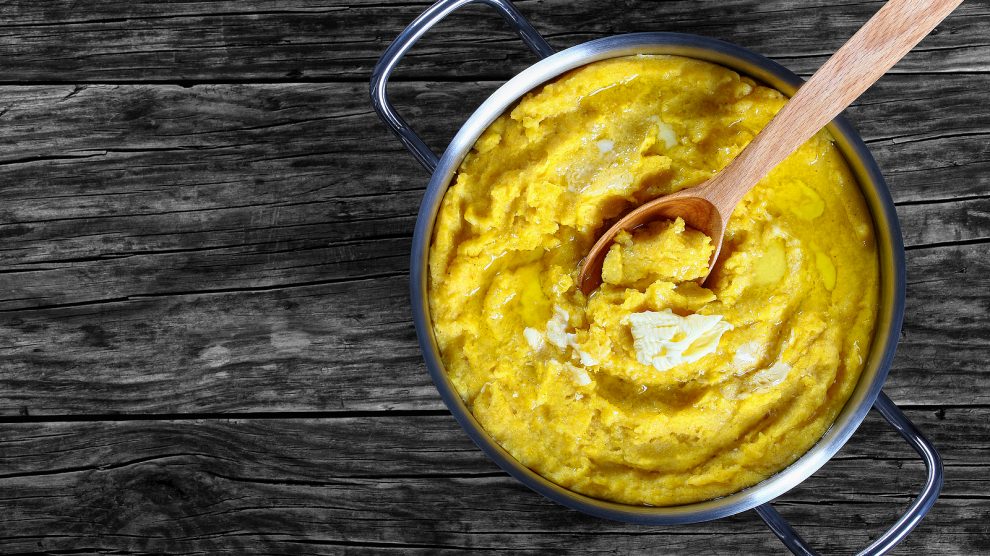 A new book looks at the complex past of one of Europe’s most simple dishes: Romania’s once ubiquitous mămăligă.

Apparently, these are good times for mămăligă, a simple dish of polenta or porridge made with bright yellow maize flour, that for centuries was a staple of the Romanian diet.

Having been all but banished from the menus of urban Romania’s better restaurants for decades – deemed a peasant dish unworthy of sophisticated diners – it has recently made the most unlikely of comebacks.

Now, the hippest, trendiest, most inventive and expensive Romanian restaurants in the country’s capital, Bucharest, will serve it, albeit with flourishes and embellishments such as exotic spices alien to Romania’s rural communities where it was for so long nothing more than an everyday source of nutrients.

At The Artist, perhaps the country’s finest restaurant (which fittingly sits on Bucharest’s most storied street, Calea Victoriei) mămăligă is barbequed and served with a jus of port wine alongside a more traditional accompaniment, Telemea cheese.

As if to confirm mămăligă’s reinstatement as culturally acceptable, it can also now boast a biography, a beautifully written and in parts laugh-out-loud volume by Alex Drace-Francis which traces the complex history and cultural relevance of this most simple of dishes.

A literary and cultural historian currently teaching at the University of Amsterdam, Drace-Francis spent a year delving into mămăligă’s past, and in doing so offers us a fascinating account of trade and war, of competing empires and national consciousness.

“There are histories of salt, cod, tomatoes, the potato. Why not mămăligă?,” says Drace-Francis, as he tucks into a plate of that other well-known Romanian dish, mici. “There is a book that looks at maize from an American perspective, and another called Tortilla Nation, about Mexico. There’s an established body of food history.”

Mămăligă, argues Drace-Francis, has functioned as an indicator of ethnic identity, social status and mores in Romania for well over a century and a half, and its study – which he dubs mămăligology – can lead to a better understanding of the making of a national identity, including its multiple paradoxes and social inequalities.

“Its status as a peasant dish is nothing new,” he says. “Foreign travellers in the 19th century were already calling it ‘the food of the peasantry’. That’s an old and fairly standardised image.”

As such, The Making of Mămăligă is as much a history of Romania and its constituent territories, until relatively recently split between the Habsburg and Ottoman (and briefly Russian) empires, as it is of the dish itself; a dish which – as Drace-Francis admits – could not be simpler. “’You heat a cauldron of water, throw in cornmeal, stir vigorously for a while, then garnish. That’s it.”

Less simple is the question of how maize – which originates in North America and was brought to Europe by Columbus in the late 1400s – arrived in what is today Romania.

It is not a question that Drace-Francis has managed to answer, at least not definitively, although this is not for the want of trying; he examines various theories, some crankier than others.

The first direct mention of maize in Romania is in northern Transylvania, at the fortress of Kővár (Cetatea Chioarului, today in Maramureş county). It then crops up (pun intended – Drace-Francis’s book is similarly laced with such humour) in various sources across the country, including Wallachia in the south, which was under the control of the Ottomans.

Its popularity amongst the Romanian populations of both regions (who in Transylvania in particular were traditionally poorer than other ethnic groups) can be put down to two key factors: it offers more nutritional value than wheat (although it requires more labour and water) and was not subject to taxes which officially fell only on wheat.

“[In Transylvania] in 1686,” the book suggests, “there was even an attempt to outlaw maize’s cultivation by ‘the poor inhabitants’, as it threatened the production of wheat and other taxable cereals, which was considered ‘very damaging to the landowners’.” There were similar attempts to discourage the growth of maize in Moldavia, modern Romania’s northeastern province, in the 1690s.

As such, Drace-Francis is persuaded that whether maize first arrived in Romania through Habsburg trade routes or Ottoman (or, indeed, from elsewhere), it was not “brought” by either empire, but by individuals at a local level who interacted with both empires.

As for mămăligă, it is first attested in early 16th century Wallachia, but as a place name. It appears as a personal name somewhat later. As a dish, it is first mentioned in Transylvania in 1718, and in Wallachia in 1723.

“Nobody has quite clarified the origin of the word, which is part of its charm,” writes Drace-Francis in the book. “People look elsewhere, claiming a link with Italian meliga ‘polenta’ or Bulgarian mamul ‘ear of corn’. But these words are not satisfactorily explained in the respective source languages either… The combination of a mushy semantics and a sonorous phonology seems appropriate for a dish with such a powerful spoken and unspoken history.”

In the first Romanian cookbook, 200 de reţete cercate (200 tested recipes), published in Moldavia in 1841, there is no mention of mămăligă, “perhaps because it was considered so easy to prepare that it did not require instructions,” suggests Drace-Francis.

He adds, however, that the book’s publishers, Mihail Kogălniceanu and Constantin Negruzzi, saw it as a way of changing local tastes, moving away from traditional “Oriental” cuisine. An early attempt, perhaps, to discredit the dish.

Nevertheless, mămăligă was central to Romania’s national diet for centuries, and played a role in defining the country’s national identity. Both an uprising in Wallachia in 1821 (a manifestation of nascent Romanian nationalism) and a peasant revolt in 1907 came in the wake of maize shortages.

Mămăligă has also become a national brand, if not always a universally admired one. Romanian delegations at trade and tourism fairs will hand out samples of mămăligă, a symbol of tradition and continuity, of Romanian endurance.

The Making of Mămăligă takes the story of mămăligă to World War I, a time that could loosely be described as the beginning of its decline. Bread gradually replaced it, even in the poorest parts of rural Romania.

Its recent renaissance, as a dish found on the menus of leading restaurants, can also therefore be seen as a rather ironic confirmation of its demise. That it is no longer the staple of the hoi polloi makes it acceptable to be eaten by Bucharest’s most ambitious social climbers without fear of being thought poor by association.

Romanian historians have so far given only desultory attention to the history of mămăligă. It has taken Drace-Francis to offer its story a proper telling, and he does so with much wit (most of it rather corny) and an eye for a revealing vignette. This charming book will delight foodies and anyone with an interest in Romanian history alike.

If you’re into both, you’ve hit the jackpot.

The Making of Mămăligă is published by CEU Press, and can be purchased in the UK and Europe through Blackwells.

‘A theatre of ideas’: Bringing Ukrainian writers to the world
Armed with techno, Vilnius DJs are taking on the world’s autocrats
Comment