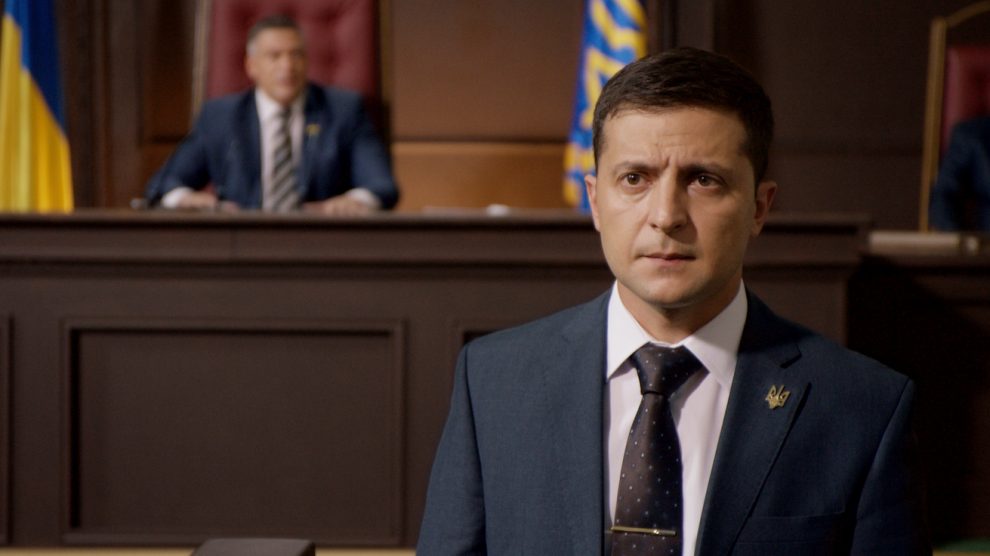 Streaming service Netflix has added Servant of the People, the 2015 TV series in which Ukraine’s President Volodymyr Zelensky – then a comedian and actor – stars as a schoolteacher who becomes president. But is it any good?

Even his biggest fans and most vocal supporters will admit that just like his fictional alter-ego Vasiliy Petrovich Goloborodko, Volodymyr Zelensky never looked truly comfortable as Ukraine’s president before Russia invaded the country on February 24.

Early that morning, as the first Russian tanks crossed the Ukrainian border, Zelensky faced a test: Would he (and Ukraine with him) crumble? Or would he rise to the moment?

Few expected the latter, but rise to the moment is what Zelensky certainly did, and has been doing so with staggering effectiveness ever since. He has become a symbol of Ukraine’s resistance, a defender of the free world, his refusal to leave Kyiv at one with the bravery and heroism of the Ukrainian people.

Media savvy, as you would expect for a polished performer who has starred in TV series and films, and who waltzed and jived his way to victory in the Ukrainian version of Dancing with the Stars, his regular social media video posts – shot in central Kyiv despite the constant danger of Russian shelling – are now the stuff of legend.

Volume after volume will be written about Zelensky’s magnificent leadership in this war, and they will be studied across the world for generations to come. His influence on future leaders should not be underestimated: we are likely to see him become a reference point in history. There will be talk of leadership before Zelensky, and leadership after Zelensky.

It’s also likely that Servant of the People, the TV show in which Zelensky plays a schoolteacher who becomes Ukrainian president almost by accident, will be equally revered. First broadcast in Ukraine in 2015, the show is now on Netflix across the world. Three series are available (and we have to admit to having had the time to watch only the first): it was a huge success both in Ukraine and, ironically, Russia. Plans for a fourth series were shelved when Zelensky in 2019 decided to run for president for real.

In the first episode, originally produced as a pilot, Zelensky’s path to the presidency is told in flashback. A history teacher still living with his parents and reliant on his mother to iron his shirts, he unleashes an expletive-filled rant against corrupt and hypocritical politicians. The rant is secretly filmed and posted online by a student, and quickly goes viral. His class launch a crowdfunder to raise the two million hryvnia (around 61,500 euros) needed to register as presidential candidate.

Given little chance of victory, when three oligarchs decide allow what they euphemistically call “uncontrolled democracy”, Zelensky wins the election by a landslide, just as he would later do in real life.

A show about power, not politics

The show, which was made by Zelensky’s own production company, Kvartal 95, is not overtly political. In fact, it’s hardly political at all. It’s more a satire on how people – and, more pertinently, their relationships – change when handed power.

Importantly, it’s funny, sharp, and, at times, farcical. Zelensky’s performance has the perfect timing you would expect of a vastly experienced comic. It has a touch of Eric Morecambe about it (a reference that I am well aware will be lost on anyone not familiar with 1970s UK television), and charmingly portrays the naivety and vulnerability that a struggling teacher propelled into the president’s office would no doubt feel.

Over the course of the first series, the initially timid Zelensky grows into the job of president, becoming increasingly confident and winning over doubters with his honesty. He always leaves enough doubt in the viewer’s mind however that he’d perhaps rather still be a run-of-the-mill high school history teacher.

Admittedly, some of the jokes get lost in translation (the series was made in Russian and the subtitling could be better), while more jokes still will go over the heads of those who have never lived and worked, or done business, in Eastern Europe.

But as good as it is, Servant of the People is unlikely to be remembered for its artistic merit. It will instead become (if it hasn’t already) a piece of history that serves to demonstrate how heroes are often found in the most unlikely places.

In search of Romania, one of Europe’s most misunderstood countries
Five unpopular opinions about Poland
Comment